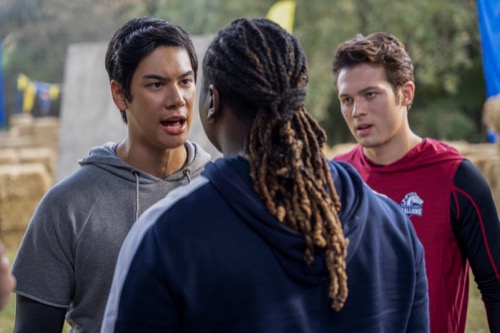 Tonight on the CW their new supernatural series Legacies air with an all-new Thursday, November 18, 2021 episode and we have your Legacies recap below. On tonight’s Legacies season, 4 episode 6 called, “You’re A Long Way From Home,” as per the CW synopsis, “Josie (Kaylee Bryant) and Lizzie (Jenny Boyd) search for answers which leads Lizzie to uncover a dangerous plan.

Cleo (Omono Okojie) works on tracking down Hope (Danielle Rose Russell), who does not want to be found. Hope pays a visit to a familiar face. Meanwhile, Landon (Aria Shahghasemi) gets some clarity – and a surprise visitor.”

In tonight’s Legacies episode, Cleo tells the gang how she had a vision they all died. Josie is spooked. They head to class. They are going to figure out a way, Josie reassures Cleo. Lizzie skips class. Josies finds her. Lizzie is working to save Ric while Josie is worried about Hope. They can’t give up on her. Lizzie finds an old piece of paper in one of Ric’s books.

Landon tries to pass the gates in Malivore to get to Peace. The necromancer is denied access. Landon is then too. The necromancer laughs. How ironic. Meanwhile, Finch and Cleo realize no one is tracking Hope at all as they said.

Hope arrives at Clark’s house just as his new girlfriend Trudy, who is madly in love with him, asks him to stay over more. It isn’t long before he realizes Hope’s humanity is off. Meanwhile, Josie is struggling to find Hope while Landon looks for another way out.

Clark is fired from his job after Trudy comes in. Hope told her everything. Her father is the boss. Clark leaves and finds Hope waiting for him. Back at the school, the gang tries to prepare for who will fight Hope but they all end up fighting one another.

Landon meets the first person, Oscar, the necromancer killed for more power. Oscar is forgiving, surprising Landon. Oscar tells them about how a coin can bring them back. Landon has an idea.

Lizzie goes against Josie. She is going to save Ric with a spell she found. It’s a bit of black magic. Josie tells her Ric wouldn’t approve but Lizzie doesn’t care. She turns herself into Lizzie and leaves the school. Meanwhile, Hope brings Clark to a warehouse filled with monsters.

The necromancer apologizes to Oscar when they are alone. He shouldn’t have done that. Meanwhile, MG tells Kaleb to hang back and let someone else lead. The gang just doesn’t trust him again.

Lizzie is just about to take a man’s life at the hospital when the patient’s daughter shows. She stops. Josie comes to see her and console her. After they come to see Cleo who just had a vision of stabbing Hope.

Clark and Hope get into a fight. He wants to live a normal life. He likes it. Later, Clark calls and gives Kaleb a tip on a monster. After, he and Trudy make amends. Kaleb turns Jed down on training. He also takes Clark’s tip and tells no one.

Josie vents to Finch about the day. She hoped Lizzie would have done the spell. Ric shows up just as it looks like Landon and the necromancer may be able to take the boat to Peace.