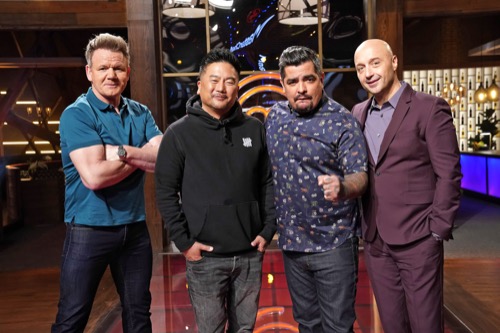 Tonight on FOX Gordon Ramsay’s Masterchef returns with an all-new episode on Wednesday, August 11, 2021, season 11 episode 9 called “Roy Choi – Elevated Street Food,” and we have your weekly Masterchef recap below. On tonight’s Masterchef episode as per the FOX synopsis, “The pioneering king of the food truck revolution, Roy Choi, tasks the home cooks with making a street food dish worthy of a Michelin star restaurant. This week, the home cooks are fighting for immunity in the next challenge.”

Tonight’s Masterchef episode, the episode begins with the top nine of Master Chef Legends. We are now in the second half of the season, it is time for the cooks to focus. The guest tonight has won incredible awards, he is the savant of street food, Roy Choi. Roy says he was fired as a chef, he couldn’t get a job so he started selling tacos on the street. A friend gave him the truck free for three months, and he made it.

Anne tells him that she loves how he got kicked down and got back up. Tonight the cooks have to take a street food item and make it into an elegant dish. The winner will win dinner for two at Roy’s Las Vegas restaurant and immunity in the next challenge. They have sixty minutes to prepare their dishes. The last round was a low point for Joseph, he really wants to win this challenge today.

Gordon and Roy walk around to see what the cooks are doing. Kelsey is making cake, she says everyone is going to make tacos and she didn’t want to be like everyone else. Alejandro is making a potato dish, poutine. Roy tells Alejandro to simplify his dish, don’t overcomplicate it. Anne is doing Asian fusion, it is a challenge. Suu is making a NY strip as a kabob, Joe tells her they are looking for flavors that have a punch. Joseph loves street food, and all he wants to do is make the judges proud.

Lexy has the least experience cooking, this is stressful. Autumn is working with lobster for the first time – she wanted to do something that represents where she comes from, Boston. Kelsey burned her caramel and has to start over again, the cake she is making is super complicated and this is a setback. They are coming down to the last five minutes and have to start plating.

Tonight the judges are tasting every dish. Kelsey is first, she made White Chocolate & Buttermilk Cake – Gordon says it is delicious, Roy says it is excellent, Joe says she nailed it and Aaron loves it. Lexy made a New York Strip Cheesesteak – Gordon says the steak is cooked to perfection but the let down is the sauce, Roy loves the dish, Aaron didn’t like the potatoes, Joe tells her to be confident about what she cooks.

Abe made Mici with Lamb, Beef & Pork – Gordon says the flavors pop, Roy is delighted, Aaron says the sauce and the slaw was delicious. Suu made New York Stip Kabob – Aaron loves the spices and flavor, Roy loves the dish, Gordon says well done. Michael made Fish Tacos – Gordon is not pleased when he sees that Michael didn’t take the skin off the fish but it is cooked beautifully and he nailed the flavors, Roy liked it but not the crab, Aaron loved the spices. Joseph made Pork Chop Bnah Mi – Gordon loves it, Roy says it is a great dish, Aaron loved it, Joe says it is very clean very precise.

The judges deliberate and announce that three dishes stood out; Kelsey, Joseph, and Lexy. The winner of this competition is Joseph. He came off the worst challenge of his life, winning this immunity puts him in the top eight. Roy tells them to believe in their selves, cooking is about technique, but they also have to believe.