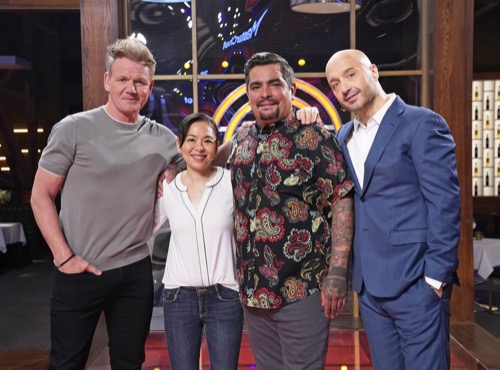 Tonight on FOX Gordon Ramsay’s Masterchef returns with an all-new episode on Wednesday, August 25, 2021, season 11 episode 11 & episode 12 called “Legends: Dominique Crenn – The Wall/Legends: Niki Nakayama – Kaiseki,” and we have your weekly Masterchef recap below. On tonight’s Masterchef episode as per the FOX synopsis, “Dominique Crenn, the only female chef in America to attain three Michelin Stars, visits the MASTERCHEF kitchen with a brand-new team challenge – the cooks must pair up and make the same exact dish…without being able to see one another.

In tonight’s Masterchef episode, tonight was a big one. The contestants dealt with a challenge like no other and the one issuing the challenge is Dominique Crenn. She was the only female chef in America to receive three Michelin stars. She was a Legend! She also brought a very unique and incredibly difficult challenge with her. The Top 8 will be paired off in a Team Challenge.

The contestants had one hour to cook identical dishes with their partner and unfortunately, they couldn’t oversee what the other will be doing. There was a huge wall placed in the middle of the room. The wall will separate the teams so that they truly couldn’t see what the other was doing and they instead had to rely on communication. Which is often easier said than done.

The teams only had five minutes to conceptualize their dishes. They then had to get everything from the pantry in the same amount of time and they couldn’t go back. The pantry will be closed during the challenge. Joseph was paired with Anne. Anne gets very frazzled in the kitchen and Joseph knew this. It’s why he let her lead. He let Anne dictate the show and even that couldn’t stop her from being frazzled.

She changed her mind. She asked for opinions in spite of not really wanting to hear them. She was a little bit all over the place. The other teams were doing better. Alejandro was paired with Suu and they had great communication. They made sure they were doing everything in sync. They also threw ingredients over the wall to help the other out and so they were a great team.

Another good team was Kelsey and Abe. They wanted their dishes to look the same and so they found other ways of measuring their ingredients. Abe was very creative in the kitchen. He was talking and Kelsey was doing the same but Joseph closed himself off. Joseph seemingly gave up. He let Anne run the show and she was constantly shouting at him for some feedback but he rarely gave it.

Joseph didn’t come up with any ideas. He didn’t ask questions. He didn’t even speak unless spoken to and so Joseph seemed to still be upset about Anne being in charge. Anne chose what they were making. Joseph had suggested a lobster crepe and Anne turned it down because she didn’t know how to make a crepe.

Anne instead chose a Japanese dish. One that was on the complicated side and so Joseph had needed extra instruction to get his dish right. There were also communication issues in the kitchen. Alejandro told Suu to pour the sauce around the plate for this dish. She didn’t hear it and so she left the sauce off of her dish. This meant their dishes weren’t identical when they were later judged. Another communication issue was with Autumn and Michael. Michael served a smaller piece of meat because he used a rounder to cut his into a perfect shape and so that meant Autumn had the better meat portions on her plate while Michael had the better puree. And then there was the Anne and Joseph team.

Anne knew she had been in control of the kitchen. The judges knew it as well and so the failure on the dish lands on Anne. Their dish had been a failure. They were something wrong with both dishes and Joseph should have spoken up during the process because handing over complete control to someone else hadn’t helped him at all. Next up were Abe and Kelsey. Their dishes looked similar. They were also on the same plate. Only Kelsey’s fish was slightly undercooked. Other than that, the judges loved the dishes. They loved the taste. They loved the uniformity. Kelsey and Abe were the winners of tonight’s challenge and they won a dinner at Dominique’s restaurant. And so they get to enjoy Michelin star quality food while was sent packing.

Anne and Joseph landed in the bottom two. The judges took everything into account and they eliminated Joseph. They said he wasn’t present in the kitchen. He left everything to his partner and in doing that he lost his voice. Joseph was eliminated. He was going home tonight all the while Anne lives to fight another day. With Joseph gone, it was now down to the Top 7! The Top 7 got to meet the legendary Niki Nakayama. She was a pro in Japanese cuisine. She serves several courses as part of her menu and so that was going to be a challenge for the contestants. They had to come up with a Japanese-inspired three-course meal. They only have an hour to cook all three courses and strategy was what separated the winners from the losers.

The winners came up with a concise plan. The losers on the other hand were so frazzled that they thought they picked up turnips and it turned out to be parsnips. Anne made that mistake. She has suddenly left items she didn’t know how to incorporate. She decided to just make the parsnips work. Anne figured they tasted alike and so she had no problem with switching them. Alejandro on the other was creating confusion on a plate. He was making scallions and chicken thighs on a skewer. The judges thought it might be too easy but at least it wasn’t like Abe. Abe once considering serving steamed strawberries and the judges talked him out of it. They told him to stick to savory over sweet.

The judges also came back to Anne. They had never heard of parsnips used in a Japanese dish and so they asked her where she saw that and she named a restaurant that did it with turnips. Only she didn’t have turnips. She only had parsnips and so that’s what she’s using. She figured they would taste the same and she ignores the skeptical looks from the judges. Then cried when it was just her. Time was called. The contestants had to bring down their dishes to be judged and up first was Autumn. Autumn’s presentation was beautiful. The food tasted wonderful. There were some issues with the rice on the sushi roll because Niki thought it was too firm. But everyone agreed they loved her croquette.

Abe was called next. Abe’s dishes were good. The judges enjoyed and they enjoyed the presentation however one of the ugliest presentations was Anne’s. The parsnips looked ugly. They looked horrible and no one would serve them like that in a restaurant. Her dishes also lacked color. They were all brown. She also made a squid dish that was slimy in the middle and parsnips were under seasoned. Her rolls were also overcooked because some were burned. Michael’s dish looked appealing. They just weren’t cooked to be appealing. The dishes all had something wrong with them and so the judges weren’t too thrilled with him. The next dishes they asked were Alejandro. Alejandro did amazing work.

Alejandro almost had a perfect score. What stopped him was his steam dish because his broth was seasoned well and it tasted just like broth. Kelsey had a similar situation. Her dishes were good. It was just little things here and there that prevented her from getting a perfect score. But the real shocker of the night is Suu. Suu served a colorful array of dishes and unfortunately, she forgot to remove the poop sack of one of her shrimps and so that was automatically a mark against her. Other than that, Suu proved she was a little out of her league. It shocked the judges and they hated to detract from her but the bottom three was easy. The winner of the challenge is Kelsey. The bottom of the challenge was Michael, Suu, and Anne.

And the person eliminated tonight was Anne. Anne and Joseph both left in this two-hour episode of “MasterChef USA”.