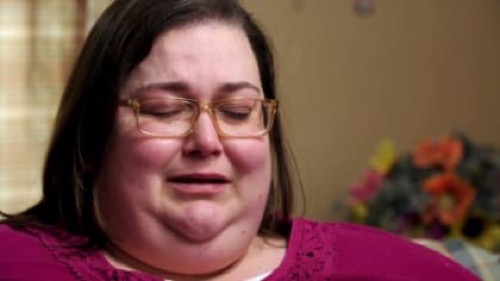 Tonight on TLC their fan-favorite series My 600-lb Life airs with an all-new Wednesday, January 13, 2021, Season 9 Episode 3 and we have your My 600-lb Life recap below. On tonight’s My 600-lb Life season, 9 episodes 3 called “Carrie’s Story,” as per the TLC synopsis, “20 years after her dad died as a result of a botched weight loss surgery, Carrie is on the brink of eating herself to death. To live, she must face the fear and grief of losing her father and end a cycle of toxic behavior with her husband Chris.”

Carrie is 37 years old and lives in Texas. She wakes in pain due to her weight. Her knees hurt. Chris, her husband, helps her bathe, get ready for the day. These are all things that upset her. She feels humiliated. They haven’t been intimate in over a year. After getting through her morning routine, she turns to food for comfort.

Food is euphoric for her. She started eating young, around age 8. As she got older her weight increased. By 18, she weighed 400 lbs. She headed to college but only attended for 4-5 months. She ended up dropping out after she became pregnant. Without a partner or husband, her mom often lectured her. She then married a man she met online. He became abusive. After he started including her daughter in his threats, she left. Around the same time, her father had gastric bypass due to his weight. Following the surgery, he passed away after developing sepsis.

Later, she met Chris. They tried to have a child. After miscarrying, she discovered she had a mass. She had to have it removed along with a hysterectomy. Her life has really gone downhill since then. She has gained more weight, her marriage is strained and she fears for her life.

Today, she plans to travel by car to Houston. The drive is long. She hasn’t been in the car for that long in years. She and Chris are headed to meet a doctor she hopes will change her life.

They make it without stopping. They meet with Dr. Nowzaradown. Carrie weighs in a little over 600 pounds. He assesses her; asthma, fast resting heart rate, diabetes, high blood pressure. Dr. N tells her this is all about her being serious, stopping the snacking, and making the changes. He wants her to lose 60 pounds in 2 months.

Dr. N also includes Chris in this challenge because he is an important part of Carries’s life. It is also important that they change the relationship and how it revolves around food.

A week after starting their new lifestyle, Carrie and her family are eating vegetables and more. She is scared about how many changes need to be implemented but she is determined.

Carrie and Chris head to see Dr. Now. They plan to stay a night in Houston before meeting Dr. Now. She knows she didn’t meet her goal but hopes he lets her have the surgery.

They arrive at the office and are weighed in. They both lost 12 pounds. They meet with the doctor. She admits she didn’t try hard enough. Dr. Now wants her to use other solutions otherwise she is wasting her time and his. He gives them both another chance.

As part of their weight loss plan, they attend marriage counseling. They realize that Chris needs to say no more to getting her food. He tries to hard to please her and it is hurting her more than helping her.

After their session, they subscribe to a food service. This makes things easier for them. They love the meals and are committed to getting healthy. But it is hard to break their bad habits.

Its now been 5 months. They head to see Dr. Now. They weigh in. Carrie lost 34 lbs. Chris lost 17 lbs. Dr. Now thinks they did well but could have been better. He believes Carrie needs solo therapy as well as couples therapy. Carrie and Chris agree.

Six months in, Carrie is trying to turn things around. She is exercising and journaling. She is trying to find more reasons to do this for herself.

They head to Dr. Now’s. She weighs in. She has lost 65 lbs. Chris has lost 18 lbs. Carrie hopes she will be able to get weight loss surgery.

Carrie is approved for surgery. Eight months later, it is her surgery day. She is excited. But she also suffered a set back. A flash flood hit her trailer. They have been staying in a hotel. She is trying to look at the positive.

She heads into surgery. Chris sits waiting. He is nervous. He just needs her to be all right. Inside the OR, Dr. Now takes out a portion of her stomach. Her surgery went well without issues.

After surgery, Carrie remains on a liquid diet for a month. She loses more weight but not enough. Dr. Now tells her she needs to stay on track or she could fail. She heads out on a walk with her daughter. She hopes maybe next time she can run a little. She is due to meet the doctor in 3 weeks.

They head back to see the doctor. It has been 10 months. Carrie has hit her goal weight this visit, 442 lbs. Dr. Now is proud of them both. He plans to see them in a couple of months. Dr. Now is confident they will succeed if they keep trying.

It has been 12 months. Carrie and her daughter go shopping. They haven’t done this in years. They head out later to play beanbag. Carrie is happy. They are all making progress.