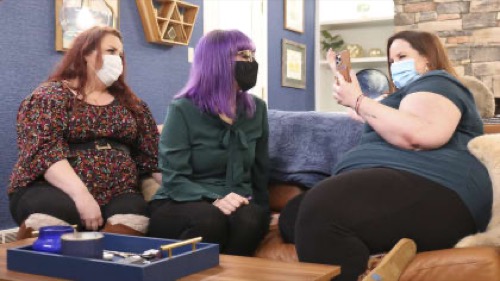 In tonight’s My Big Fat Fabulous Life season 9 episode 1, “Whitney looks forward to life after quarantine, but Buddy may have abandoned her for his new girlfriend. When Whitney develops a crush on a Parisian man, her friends worry about her getting into another long-distance relationship.”

Whitney moved back to Greensboro. She went through a lot of hard things in Charlotte and she was starting to feel isolated there. The move meant she could finally put the past behind her. Whitney hasn’t heard from Chase in a while. She stopped crying about how she cheated and impregnated another woman. Her therapist thinks this is a great improvement. Whitney agrees with the therapist and she’s moved on. She’s talking to a guy right now. She met a French man on a language exchange program and now she’s crushing on him. She was interested. He seemed interested. Whitney understood how incredible it sounded to be crushing on her French teacher and still she couldn’t stop herself.

She had her crush. Whitney has been lonely in spite of moving back to Greensboro because she lived with Buddy and Buddy was often away because he was sleeping over at his new girlfriend’s place. Whitney barely sees Buddy. She was feeling lonely and then in walked the French tutor who was helping her with her pronunciation. Whitney has also been putting her new house in order. She’s ordering furniture and arranging things. She’s also been working on No BS Active. She works as a personal trainer and she’s since hired another trainer named Jessica. Jessica was great at what she did. She and Whitney have a great rapport. The audience loves it and its increased viewership and revenue.

Whitney is out of her partnership with Ryan. She’s now just working with women and she feels they get more done now than what she was doing before. Whitney also wants to become a personal trainer. She knows she’s experienced some discrimination because of her size. People tend to hire the trainers they want to look like and so not many are going to want to hire a big girl to teach them about fitness, but Whitney still wants to pursue it. She loves her job. She wants to increase her role and she’s prepared for the discrimination she’ll get for it. Whitney later drove her parents to get their second vaccine shot. Her parents are now fully vaccinated and its eased the burden on their children.

Whitney couldn’t wait to get her vaccine. She thought the sooner she could be better because then life could return to normal and she finally has her housewarming. Whitney wanted to celebrate her new house. She wanted her family and all of her friends to be there to see. Whitney was waiting in the car while her brother went with their parents to go get the older folks vaccinated and her mother had tripped before getting into the vehicle. Babs didn’t want anyone to tell Whitney. She knew Whitney would worry and she didn’t want to deal with it. She just wanted her shot. She got it and then she went back to the car like nothing happened and the others maintained the lie. Whitney soon focused on her housewarming.

She decided to go ahead with it in spite of the pandemic. She turned to Buddy for help in putting the finishing touches and it turns out he forgot he was supposed to be there. He went over to his girlfriend’s. Buddy sometimes gets swept away in new relationships. He didn’t remember he was supposed to work on the bookshelf or that he was in charge of meats. Whitney had to remind him. Whitney also flirted with her French teacher. She told everyone about him and how he was just a teacher. Only no one bought that. They saw that he would call in the middle of the day to chat with Whitney and he was def giving off an aura that he’s interested in. Their last call was very much flirting and Whitney’s friends Ashley and Heather pointed that out.

The French man was interested in Whitney. His whole vibe was saying as much and so now Whitney is excited. She couldn’t wait to meet him. They’ve only seen each other over facetime and the Frenchman knows she’s big. It’s all over the internet and he could easily have looked it up. Whitney firmly believes her crush knows what she looks like and so she takes it as a good sign that keeps calling. Later at her party, Whitney revealed her Frenchman. She told them about him and her friends all said that he wants to be more than her teacher. They also said to be careful. Whitney has a history of getting involved with unavailable men. There’s no one more unavailable than a guy who lives in a whole other country with strict lockdowns.

Another thing, Buddy showed up late at the housewarming. He was put on meats and yet he failed to deliver. There were some people that actually had to go home and so they went home without seeing Buddy. Buddy is unreliable. The others grilled Buddy about his disappearance and he said he’d work on it but Whitney told him they needed to talk. And she was going to talk about why she’s collecting his mail with him never insight.