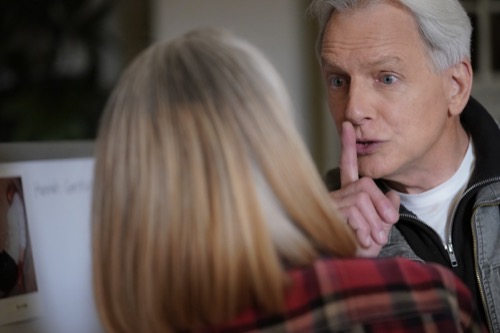 Tonight on CBS NCIS returns with an all-new Tuesday, May 18, 2021, season 18 episode 16 called, “Rule 91” and we have your weekly NCIS recap below. On tonight’s NCIS season 18 episode 16, “Rule 91,” as per the CBS synopsis, “While pursuing a dangerous arms dealer, the team is shocked when Bishop is implicated in an old NSA leak; Gibbs and Marcie realize the killer they’ve been tracking may be onto them.”

In tonight’s NCIS finale, Bishop isn’t acting like herself. She was taking bigger risks out in the field and she recently met up with Gibbs to ask him if what he did was worth the fallout. He told her it was, but she wasn’t upset by that answer. She instead seemed to agree with him. Bishop started to take risks after that conversation and she later killed two men in the field after the team had been authorized by the Director to carry out an undercover gun buy.

The gun buy was sorta ruined once the three guys selling guns identified McGee and Torres as law enforcement. The bad guys began shooting first and Bishop responded. She killed two and one got away. The one that got away was also the one running things. He was known as Mr. Flori. It was hard to identify him as well as his friends because they weren’t in the system and so McGee later hacked the dead men’s phones.

McGee found out the men were contacting a landline in the leadup to the shooting. The landline was connected to an address and the team followed up by going there. They found a deserted house. It was cleared of what seemed to be a weapons hideout and so the house was the stash house. The house also revealed that the bad guys were doing more than merely selling guns. They were also selling secrets.

The team found a classified NSA file at the house and the file was about the Americans using Syrian refugees to lure out an Al-Qaeda leader. It was legal. It also unethical and yet somehow the gun runners found out about it and we’re selling the information on it. Bishop used to work at the NSA. The team was expecting her to use her connections there to get answers.

Only Bishop hasn’t been working there in over ten years. She says her contacts there were all out of date and so that’s where Knight stepped in. Knight was bored. Her former team had all been killed off and she needed something to do. The team also needed someone with NSA contacts. They asked Knight to reach out to her friends and, while that was happening, the team continued their investigation.

They were still wondering how the bad guys got a hold of an NSA file when Director Vance came in. Vance had heard back from the NSA and the NSA believes that the person who passed on this file was Bishop herself. Bishop denied it of course. She said she never leaked information or risked her freedom to leak information and so the Director and Bishop spoke with Deputy Director Ellis of the NSA.

Ellis claims the data was breached ten years ago. Back when Bishop worked with the NSA and before the gun runners had entered the picture. This is why Ellis believes Bishop is guilty. She doesn’t think Bishop has been set up and everyone else does. They knew Bishop. Bishop was going to be suspended while an investigation is carried out and so she couldn’t work on her own case but this whole thing put the situation with Gibbs into perspective.

Bishop visited him after she too was suspended. She asked him if he was coming back and he pretended like he didn’t know what she was talking about. Bishop was asking Gibbs if he was going to cut ties and run. She explained it to him and he just kept saying that it was in Vance’s hands. Vance decides when Gibbs comes back.

Gibbs meanwhile was looking into a serial killer. He was approached by the journalist who wrote his story with the dog-killer and Marcie told him that she believes the person who killed her friend was still out there. Gibbs agreed to look at the case. He ran into similarities with another case and both he and Marcie soon learned that they were looking for a serial killer. This serial killer has killed four people already.

He or she targets people, ties them up, and then beats them to death with a hammer. Gibbs also noticed that he’s being followed lately. He ran a test on his home and he found a bug that was planted in his basement. Gibbs warned Marcie about it. He even gave her the device to check her home and her office.

Gibbs wasn’t thinking about NCIS. He wasn’t even willing to show remorse to his team for his actions and what it cost them and so Bishop went directly from her chat with Gibbs to Vance’s office. She confessed to him that she leaked the file. She leaked it because the NSA was using innocent refugees in order to get one bad guy and she found it to be wrong.

Bishop also didn’t regret it. She quit her job at NCIS. She refuses to take that back and there was nothing anyone on the team could say to her that would make her change her mind. Bishop doesn’t regret what she did. She won’t even show remorse towards McGee and he thought he knew her. McGee wondered what else she was hiding. He was so lost after his conversation with Bishop that he sought out Gibbs.

Gibbs hadn’t seen Bishop since she came clean about what she did. He was in fact told by Vance what happened and he hasn’t reached out to anyone and he’s still investigating his serial killer. Gibbs was busy. He and Marcie found out their serial killer has an itch for killing journalists and so they were tracking down their serial killer while the team was busting their case. They found their third gunrunner.

It was Mr. Murati. He confessed to selling guns and even storing them in one place. Only he had no idea where the file had come from. He had never seen it in his life and so Torres put together what really happened. Torres realized Bishop threw her career in the toilet because she was going under deep cover and it was possible for the CIA.

It’s why Bishop has been taking extra training lately. Why she didn’t want to go there with Torres and why she torched her career before she left. Bishop needed to be a disgraced federal agent for where she’s going. And so Torres confronted her, but it was too late for them. She kissed him and she said goodbye as she began her new life.

As for Gibbs, he was out in his new boat when it exploded and there’s no telling if he’s alive or dead.