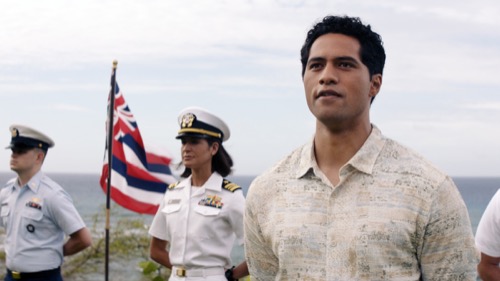 Petty Officer First Class Miles Hayward was murdered. Tennant and her team were notified when the body was found the next morning and they were quick onto the scene. They did their research on Hayward. He was a Navy Recruiter. He helped troubled kids find a new outlet in the military and he was good at his job. His latest recruit was Kekoa Neal. Neal was with Hayward the night he died. They had been training together. The training session ran long and Hayward had to order Neal an Uber but otherwise, everything seemed normal and so the team began their investigation with Neal. They asked him if noticed anything off that night. He did mention that before Hayward use to train with him and that lately, he couldn’t run the steps with him. Neal suspected his mentor might have been injured.

Neal revealed he tried to ask Hayward about it. Hayward shut the conversation and he never said what was going on with him. Neal now wishes he would have pushed. But his recount had the team look again at the body and an autopsy showed that Hayward had been worked over. He had gotten beaten up. It had not long before he died and so the suspect in his murder was naturally whoever beat him up. The scene analysis showed that whoever killed Hayward had done so from afar. They didn’t care about his car, his wallet, or his phone. They killed him just kill him and it was now up to NCIS to figure out why. They got a warrant for Hayward’s house. They found his house very orderly and there was a secret compartment.

The compartment held a gun. The team ran it and they found out it had been used in gang violence lately. The violence led the team to the Oceania Boys. They were a surf gang. They weren’t like the typical surf gang that thought the water was the most important thing and that they had to protect their beaches from outsiders. This was a gang that was purely about violence. Kai figured out how to infiltrate the group and he did so. The other members of the team went on to do some deep diving on the member so the gang. They found Brad Pacheco and it turns out he had been one of Hayward’s recruits. He crashed out of the course because he lied about his record on the form and for some reason, Hayward didn’t give up on him.

Hayward still tried to look out for Pacheco. He believed in him and the team had a reason to believe it was Pacheco who gave Hayward the gun. The same gun was used in a recent shooting. Pacheco probably got in over his head with the gang and he turned to Hayward as a friend and asked for his help. Or at least that’s what the team was thinking. They went looking for Pacheco and he ran from them after they identified themselves. They had to chase after him. Once they got to him, they brought him back to their headquarters and they tried to interrogate him. Pacheco didn’t know Hayward was dead. He also said the beatdown wasn’t his fault. The team had just revealed that the boy’s mentor was dead in order to ask him about his whereabouts when his mother came running in.