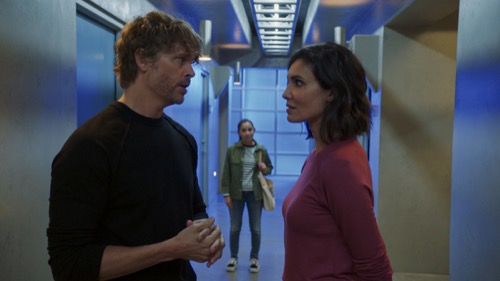 In tonight’s NCIS LA episode, a deaf engineer walked into her office one day to find hackers stealing secret technology. Sienna Marchione single handily took down two of the men while a third man got away with the technology and so she was quick to call 911 once she saw the hack had gone through. While this was happening, the NCIS team was going about their everyday lives. Kensi and Deeks were talking about their future baby.

They weren’t pregnant yet. They were still trying and so Deeks wanted them to have a plan for when the baby does around and his wife didn’t think they needed a plan. Kensi said they should wait until the baby does arrive. It was too early to be going over maternity leave and/or nannies. She thinks they should focus on their jobs at NCIS and they even have a new case.

NCIS was alerted to the technology that was stolen. The engineers on the project we’re working with the Department of the Defense to create technology that would make people invisible and everyone thought it was suspicious that the whole team on the project was murdered. However, only Sienna survived. Kensi and Deeks were dispatched. They went to go talk to Sienna and at first, they didn’t know she was deaf. There was initially a misunderstanding.

They came up behind her asking questions and she didn’t have her earpiece in. It wasn’t until they drew guns on her that she explained the situation. Sienna is deaf and she’s also a bada**. She blames herself for her team’s death because she believes she could have saved them if she had been there and so that gave Kensi and Deeks an opening.

They asked her about the timing. It was uncanny how she chose to get coffee at the most perfect time and so Sienna had to explain how she wasn’t a traitor. Sienna would have served in the Navy if she had been allowed to. Her disability stopped her from being accepted and so Sienna did everything possible to serve her country while being a civilian. She comes from a proud Navy family. She would never betray them or her country for monetary gains.

Sienna’s story was so moving that Kensi decided to let her help them with the investigation. Sienna did have the background knowledge that they didn’t have and she knew all the characters. She knew that her boss Brandon was going through a very messy and expensive divorce.

Sienna also knew that her fellow engineer Owen Winnick called out sick on the night of the break-in. Besides Sienna, Owen is the only one from the project to survive and he could behind the hack. Kensi thought Sienna helping was a great idea and she didn’t understand why Deeks was against it. Deeks didn’t think they could get approval for something like that. Kensi disagreed with him and she thought Nell would agree.

Only Nell didn’t agree. Nell was turning down the offer when Admiral Killbride overheard her and he okayed the deal. He thought they should let Sienna work the case. Killbride and Kensi were the only ones who didn’t see a problem with it. They figured if Sienna wanted to help, she should be allowed to help.

Sienna herself was happy. She knew all about NCIS and she was happy to be shown around the boat shed. She also got to be there when they questioned Owen. Owen called in sick from Heptagon and it turns out he was telling the truth. He was suffering from food poisoning. He was vomiting during the interview.

It was also pretty clear he had a crush on Sienna. Owen talked about how nice she was and how glad he was that she survived. He also tried to be important, but he didn’t really know much about who their boss was speaking with and so the team had to do their own research. Nell looked into the big tech companies that were at the same conference as Heptagon. She was doing it on her own because she sent Fatima out to be with Kensi and Sienna and Deeks was no help.

Sam and Callen were also following up leads. They ran into some trouble when someone began firing at them and so they had questions. They returned to Ops where they asked Killbride about what he knew. Killbride has been talking to SECNAV. He said that the technology the company created it would not only make people invisible but they would be invisible to radar and all other countersurveillance devices.

Everyone would want technology like that. Which is what Owen said. Owen’s house also smelled of a syrup Sienna was forced to drink as a child to make her throw up and so she suspected Owen wasn’t really sick. He was making himself sick. The women left Fatima to sit on the house and they continued to investigate who would steal the technology. The one guy who got away was identified as Steve Tricks.

The team needed to know who Steve was working for. They suspected he might be connected to Ehsan Raman who was a billionaire with Saudi Arabia connections and he recently bought a property near Heptagon. The team suspicions were confirmed when Owen later met with Ehsan. Owen met with him to hand him the encryption key to opening the files he stole and so Fatima tried and ultimate failed to stop Owen was running off after the meeting while Sam and Callen were called in to deal with Ehsan.

The two men were chasing the billionaire in their car. Nell was helping them by tracking Ehsan. Kensi was also called in. She and the guys were able to corner Ehsan before he could reach his private jet. They arrested him for the murders at Heptagon. And both men were later able to take a private jet themselves to Kam’s graduation ceremony.

The guys closed their case. They recovered the stolen technology and Sienna was grateful to be a part of it while she could. She even hugged Kensi in gratitude. The two women were talking while Nell and Killbride were discussing the end of the case and Killbride explained to her why he let Sienna assist with the case. It was a decision he didn’t regret.

Kensi and Deeks later talked had another baby talk and they realized they didn’t need to talk logistics for now. That conversation can wait until they get there.