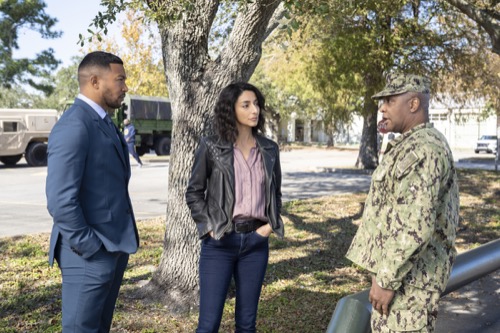 Also, Carter and his mother talk about how they’ll move forward after a past mistake, and Sebastian begins a promising new relationship.”

Lt. Commander Amanda Gregson was murdered for investigating a sexual assault. She was a Navy therapist and she had been treating Emily Tascioni after the young woman came to her to report her sexual assault. She was assaulted by a fellow Naval Officer. Which presented a problem. Gregson knew the system protects the abuser and so she created her own system to get these women justice. She was also trying to use her own system for Emily. The problem however is that Emily was scared to make what happened to her office because she didn’t think anyone could help her and so she didn’t want to reveal the name of her attacker. She wanted to bury what happened, but it presented a problem because Emily couldn’t heal from her trauma until she dealt with it.

Gregson did her best to help Emily. She even suggested that Emily make a video diary. Emily’s video was later found by NCIS and that’s how they learned what happened. Emily didn’t the man’s name. Only she did say what happened that night. She had been asked out on a date. She accepted because she was new in town and she wanted to get to know someone. She didn’t just want to eat dinner in front of the tv alone again. Emily went on this date and she even enjoyed it at first. She liked how cheesy the restaurant was. She went to the bathroom to freshen up and, while she was in there, her date drugged her drink. She later began slurring her words. She felt dizzy and she couldn’t finish her meal. And so her date offered to take her home.

Emily had thought her date was a gentleman when he agreed to take her home. She doesn’t recall the drive to her place, but she later woke up to find him on top of her and she remembers being raped. It was the one thing she wanted to forget and couldn’t. Emily struggled after her rape and her work suffered. She couldn’t do her job anymore because it was hard to work alongside her rapist. Emily only ever told Gregson what happened and now Gregson is dead. Emily could have gotten scared after that or something could have happened to her as well. She wasn’t home when NCIS came knocking and Gregson’s friend who was another therapist was also looking for her. No one knew where Emily went.

They didn’t know if she was alive or dead. However, NCIS investigates crimes carried out on naval personnel and so they investigated her rape. They found out from her video diary that she worked with her attacker. They questioned the men in her division and four men stood out. These men all claimed they were together at a strip club. One of the men was known as regular and he was known to get aggressive. Petty Officer Liam McCall has gotten bounced around a lot for his short career. He was labeled a “ladies’ man” and so the team had no problem with decoding that one. They also realized his COs were moving him around because of complaints against him. It’s what Gregson was trying to do and so the team believed they found their rapist.

McCall may even be a serial rapist. What happened to Emily wasn’t a fluke. It was a pattern and it was well-practiced. The team later questioned McCall. He knew right away that they didn’t have any evidence against him and he claimed that nothing happened with Emily. He said she got drunk and he took her home. McCall is someone who craves respect but who doesn’t know how to earn it and so Gregorio worked up a profile for him. She determined that he was a serial rapist. She found a rape accusation against him back in college and his naval record was spotless though there were those frequent transfers as if someone didn’t want him around for long. McCall was a problem and the team believed he killed Gregson to cover up what he did. And that’s why they feared he might have killed Emily.

They went looking for her. They found her car abandoned at the side of the road and thankfully Emily was nearby. She was alive. She was just on the run because she suspected McCall of murdering her therapist and she thought she would be next. The team assured Emily that they could keep her safe. They provided protection detail and she agreed to press charges against McCall. NCIS could officially arrest him now that the rape charges on file. It also helped save Emily’s career because she went missing so abruptly that she would have faced charges if she didn’t come back. The team safeguards Emily and then they went after McCall. They tried to find a hole in his story.

His friends were still claiming he was at the strip club. McCall ran with this group that was enamored with him and they did anything that McCall asked, but there one guy who wasn’t fully entrenched in the Kool-Aid. He said that he lost sight of McCall after he took a private dance. McCall was banned from private dances at the strip club because he gets too aggressive with the women there and so the team went looking for evidence connecting him to Gregson’s murder. They checked McCall’s car because he must have taken it from the strip club to the coffee place where Gregson was. Sebastian found Gregson’s DNA on McCall’s seatbelt and so that connected him to his victim. And it also didn’t hurt that Gregson was drugged with the same date rape drug he used on Emily.

The team was able to connect the date rape drug back to McCall. He didn’t even try to hide ordering it from Brazil. There was also the DNA evidence and so that would be enough for a jury in Louisiana. Pride later told McCall as much. He told him he could face the death penalty or he could agree to take twenty-five to life in prison. McCall chose to take the prison sentence. He confessed his guilt and now Emily was safe. She could go about her life without ever having to think about him again. Only Emily didn’t want to forget. She found out that Gregson was going to have McCall transferred and she was tired of all the back-channeling. Emily wanted victims to get real justice and so she was hoping to change the system. And not just come up with a secret one.

Meanwhile, Carter spoke to his mom. He told her that he took the fall for his brother Brennan and that his DUI was really his brother’s. His mother was so upset that he kept this secret. She felt bad that she didn’t protect him more and so she pulled her name from the running for Under Secretary of the Navy. She pulled her name because she didn’t want to force Carter into another lie. She just wants to protect him and Carter eventually saw that for himself.

And Sebastian decided to date someone long-distance, he knows it’s going to be hard but he thinks Fiona is worth it.