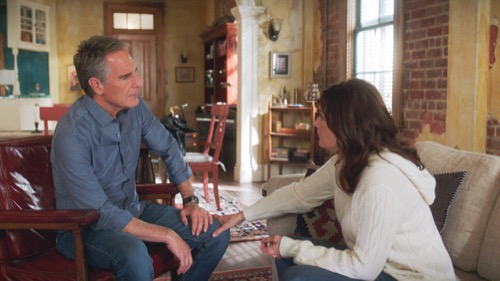 On tonight’s NCIS: Nola episode, Pride’s bar was attacked. Pride was working at his bar one night when someone threw a Molotov cocktail through his window and it was thanks to the fast actions of half-brother Jimmy that the fire was stopped before it could spread or destroy their inventory. Jimmy later asked his brother what just happened, but Pride had no clue why someone would target his bar and he was just as stumped as Jimmy.

It was a miracle that neither of them was hurt in the attack. Pride and Jimmy couldn’t open the food pantry as they would normally do and so Rita asked St. Heller’s to take their clients. Jimmy also got someone to come in to fix the window that was broken during the attack. And so both he and Rita had everything handled.

Pride could focus on capturing the people responsible. Pride checked upon a man who threw a fit because he refused to wear a mask and he had to be asked to leave. However, the team did find an eyewitness to the attack. One of Pride’s neighbors had looked through the window after she heard the broken glass and she read the sign on the van as sped away. It said “Hope Now Foundation”.

It was a charity and the charity claims that someone stole one of their vans. Pride visited the charity with Gregorio. They spoke with a person who filed the police report and, while they were there, they noticed someone. They noticed that Sasha Broussard now works at the charity. She was an old villain of Pride’s and she was recently released from prison early because of population reduction due to Covid.

Sasha has been known to try and kill Pride. She’s tried several times in the past and so Pride came to suspect she “stole” one of the vans from the charity as a means of trying to kill him again but Sasha claims she’s innocent. She insisted she was a changed woman and she also said she would never be dumb enough to use a van from one of her charities. If she wanted to kill him, she would be smart about it.

Sasha has once used a charity as a cover for her to take over the Broussard Syndicate and she had fooled everyone. She even fooled Pride back then. The two met in 2003 after he helped take down her whole family back when he worked for the sheriff’s office and he had acted as her protector at the time.

Pride felt for her. He thought Sasha was being unfairly attached to the things her family did and so he looked out for her. He talked with her late in the night. He even seemed to be attracted to her and all along she was playing him. Sasha even tried to kill him once he became aware she was shady.

So, pinning the firebomb on Sasha now is personal for Pride. He was so sure that she tried to kill him that he became desperate to prove it and so he turned to Patton. Patton followed the way of the van that was stolen. He got a picture of the driver and the driver was some kid. He was a teenager. He wasn’t in any of the databases. He also targeted the charity by trying to firebomb them as well and there’s no way Sasha would be behind it.

Sasha was a smart woman. She wouldn’t be making the same mistakes as before because she knew the feds caught her once and that they can do it again. Sasha was innocent but Pride didn’t want to see it and so he went to confront her and unfortunately got wrapped up in an assassination attempt on Sasha.

Someone was trying to kill her. Pride helped save her life and so he felt he was owed answers. He asked her what’s going on. She said that people have stepped into the void she left when she went to prison and that now they were pressuring her to sell some of the properties that were attached to her charity. Sasha had told them no. The next day her properties were firebombed and now people are actively trying to kill her.

Pride asked Sasha who were the men that approached her about the properties. She didn’t want to give him a name and so they learned of it from a local police officer that patrols the area. Sasha had been approached by Elias Watkins. Pride and Carter later found Watkins outside of his strip club. Watkins told them he’s moved on since his failed bid on those properties and that he was onto bigger and better things.

He also said he was going to need a lawyer if they had any more questions for him. And besides that dead-end, Gregorio and Khoury found out that their young driver is named Conor and that Conor wasn’t behind the attack on Sasha. Connor was just after Pride. Pride it seems could be Conor’s father. He had an affair with Sasha that goes back seventeen years ago and it could match with when Conor was born.

Conor probably asked his mom about his father once he got old enough to ask questions. She probably told him that his father was the reason she was behind bars and that he never loved them. Which isn’t true. Pride did have genuine feelings for Sasha but he was also married and he had a young daughter to think about. Laurel wanted him home with her and her mother. She was so insisting that Linda and Pride decided to give their marriage another shot.

They wanted things to work for Laurel and unfortunately, their marriage couldn’t hold on once Laurel was all grown up. Pride and Linda got a divorce. He started seeing other people and he eventually met Rita. Rita and Pride are now the happiest they’ve ever been. And so a child might create havoc.

Pride later spoke to Rita about the possibility. They both considered the odds and they both thought Connor is Pride’s son. Pride doesn’t want it to be true because he spent his whole life not wanting to be like his father and yet here he is with a son he didn’t raise and whose angry at him. Conor firebombed Pride’s bar.

Pride basically confirmed this when he asked Sasha if Connor was his son and she confirmed it. Conor is Sasha’s only child. She has been protecting him her whole life and she didn’t want him involved in the threat against her. Sasha was going to war with Watkins. Her places were firebomb by a more experienced hand than Conor did and so it was only fair that Watkin’s strip club was fired bomb as well.

Watkins and Sasha were at war with each other.