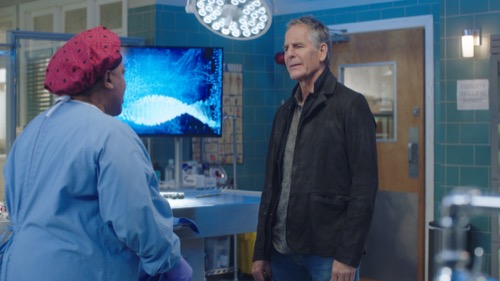 Pride must come to terms with having Connor in his life; Carter and Hannah work to define their new relationship.”

Both Special Agents Carter and Khoury were near to the blast when someone bombed Watkins. Watkins was Sasha Brossard’s biggest rival and one of his men attempted to kill her a few days, but now it looks like she returned the favor. She also succeeded where he failed. The bomber killed several people inside of the strip club and one of them was Watkins. Watkins died alongside his right-hand man Bonet.

It was Bonet who made the attempt on Sasha’s life and so it seemed only fitting that she managed to kill him as well. Sasha was a ruthless woman. No one knew her better than Pride and it was Pride who informed his team that Sasha was behind this latest bombing. This was the first bombing in New Orleans. Pride himself was dealing with an incident with a Molotov cocktail that happened at his bar and that too can be connected to Sasha.

Sasha has tried to kill Pride in the past. She may now want him dead along with her remaining enemies and there’s no telling what she told their son about him. It was their son Connor that bombed Pride’s bar. Connor was a teenager and he was angry. He probably blamed Pride for his mom being sent away to prison.

He also probably was angry to find out that the man who took his mom away also happened to his father and so Connor was a loose cannon. He was just like his mom in that sense. Pride has no idea how to handle him or Sasha. Pride thought he could arrest Sasha once they linked the bombing at Watkin’s club to a woman named Ashley MacManus and she served time at the same prison with a six-month overlap with Sasha.

Only someone killed Ashley before she could talk. Pride and his team went to her home and they found her dead in a chair. She had been repeatedly stabbed. Pride once again suspected Sasha because he said the Broussard way meant no loyalty to anyone and so Pride later confronted Sasha. He told her that he suspected her.

He accused her of being tied to all the recent violence and she asked him if he had no enough to arrest her. He does not. Sasha also wasn’t going to confess to anything and so they were at an impasse. The only thing the two of them can agree on is their son. Their son Connor was at risk. He was out on the street and Sasha’s many enemies will be looking for a weakness of hers they can exploit.

Sasha admitted to Pride that her son called her. He called to tell her that he was safe and he didn’t give up any more information than that. Pride asked her for the new burner number Connor was using. He got it and he traced it. He later found Conor at the bus stop. He was looking to take the bus out of town and Pride stopped him.

Pride had a conversation with a young man who might be his son. He told him that his mother doesn’t have a great relationship with the truth and so he doesn’t know for sure if he’s his father, but he suspects he might be and so that’s why he gave Conor two choices. Conor could either be delivered to the jail for bombing Pride’s bar or he could go home with Pride. He chose the easy option.

Conor went home with Pride. It didn’t lead to a conversation and Conor is still very upset with Pride. He’s upset Pride put his mom in jail. He fails to see how his mother was a ruthless criminal. Or how Pride had no other choice than to arrest her and send her to prison. Pride did his job. He was a deputy at the time and he had to uphold the law. Pride has done everything he could to not be his father and yet he’s made similar mistakes.

He’s kept secrets. He even kept secrets from Rita and that’s now made her question whether or not they should get married. It also didn’t help he brought home an angry teenager. Connor changes things. Pride cheated on his previous wife with Sasha and they possibly conceived a child. And so Rita needs time to get used to that.

Connor needs time as well. Pride tried talking to him and the only thing Connor wanted to talk about is why Pride sent his mom to prison. Conor thinks Pride did it because Sasha upset him. Pride had to explain that Sasha was a part of a criminal enterprise and still Conor was upset. Pride called Sasha. She collected her son. She also found a way to annoy Rita while she was at it and so Sasha was still up to her old tricks.

She told Pride that she would watch Conor. She instead ditched him on the woman who’s been taking care of him for the past five years and she went to Watkins’s funeral. Sasha tried to make peace with Watkins’s mother by letting her in on a casino deal, but Watkin’s mother didn’t care about no deal. She lost her only child.

Beverly Watkins wanted Sasha dead for what she did. She ordered her men to grab Sasha and they were going to kill her when Sasha said Conor was Watkin’s son. Now, Pride overheard that. He saved Sasha’s life and he asked her what she meant by that. Did she say it to save Connor’s life or was it the truth? Sasha told so many lies that it was hard to get the truth from her and still Pride asked because he has to know. Sasha claimed she lied to Beverly. She said Conor was his and, for now, Pride has to believe her. He needed to end the violence before someone else got hurt. He came up with a plan for Sasha and Beverly to meet with Conor to test Conor’s DNA. And everything was arranged.

They cleared out a real clinic. They were going to fake-testing Conor’s DNA so that it read he was Watkins’s son and both Sasha and her son would be wearing a wire. But there was a problem. Beverly was so hurt over losing her son that she didn’t care if Conor was her grandson or not. She still wanted to kill Sasha.

She ordered her men to grab Sasha and they were leaving with her when Connor pulled out a gun. The gun wasn’t a part of the plan. The plan was just to get Beverly confessing to the murder of Ashley because Pride no longer believes it was Sasha who killed her and now they have to arrest Beverly for attempting to kidnap Sasha. And they got her for the threats to both Sasha and Connor.

Beverly was going to kill them both to make a point. She didn’t even care if Conor was her grandson and it turns out he wasn’t. Pride secretly had Conor’s DNA tested. Conor is his son and Pride told Rita that he’s going to be there for his son. Especially once he puts Sasha back in prison for the rest of her life.