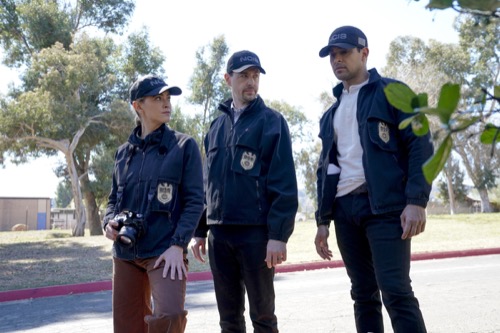 Tonight on CBS NCIS returns with an all-new Tuesday, May 4, 2021, season 18 episode 13 called, “Misconduct” and we have your weekly NCIS recap below. On tonight’s NCIS season 18 episode 13, “Misconduct,” as per the CBS synopsis, “While the team investigates a biker killed in a hit and run, Gibbs prepares to testify against a financial advisor who stole millions from his Navy clients.”

In tonight’s episode of NCIS, Someone ran over a biker. This biker was out on his morning routine with his friend and unfortunately, his friend was waylaid when his chain came undone. Therefore, it seems the killer used this opportunity to kill the biker once he was alone. The biker was identified as Petty Officer Second Class Michael Benson and his death was naturally NCIS’s jurisdiction. They were called in to investigate.

They saw the body and they also found the bike that belonged to Benson’s friend. It did have a broken chain. The friend wasn’t lying about that however there was footage of the accident and it was clear the friend witnessed the hit and run and that he fled the scene after checking to see if the coast was clear. This “friend” didn’t even check on Benson. He didn’t call for help or check for a pulse. He just left him in the middle of the street to die.

The footage of the friend running away was given to the team. Kasie checked it and she couldn’t get the license plate or a clearer look at the friend. All she could identify from the video was that the car that hit Benson was a black sedan. It didn’t give the rest of the team much and everyone was stuck on the friend.

They questioned if he could have been involved in the setup. They looked through Benson’s contacts in efforts of finding this friend and in the meantime Palmer carried out his examination. Benson died from the hit and run. He suffered internal bleeding and his death was quick. His death might also have been an accident. The victim was wearing the same outfit with the same bike and riding the same route like his friend Bernard Wilson.

Wilson hadn’t been the one to die. Only he did suspect he might have been the intended target and that’s why he ran. Wilson was the star witness in the Parker James trial. He was James’s accountant and he was a firsthand witness to the biggest Ponzi scheme in Naval history. Wilson was due to testify the same day as the accident.

The team called Gibbs knowing that he would be on the trial and they asked him about Wilson. Wilson didn’t show up at court. The prosecution had to ask for more time so that could find their witness and it was later revealed that the reason Wilson didn’t show up is that he’s dead. He was shot in his garage. The killer must have realized his or her mistake in killing Wilson’s friend and they finished the job.

NCIS found Wilson. He had clearly been shot in the head by whoever James hired and so now it was up to them to prove it. They had to prove Parker James was behind the death of two men. The team was the one to make the original case against James and Gibbs was supposed to testify in the trial, but the prosecutor removed him from her witness list because of Gibb’s recent history. Gibbs was suspended after assaulting a suspect in one of his other cases.

His credibility isn’t strong right now and the prosecutor thought she had Wilson to make her case. Now, she’s down her star witness. He had been murdered and her next best shot at conviction is Gibbs. Gibbs had overheard James’s confession. He could testify to that and everyone is hoping that Gibbs will be able to keep his cool on the stand.

Gibbs’s recent behavior is the reason why everyone’s doubting him now. He normally would have been a great witness and nowadays not even Vance wanted to take a chance on him. Vance and the prosecutor spoke. They both agreed Gibbs was the next best option. Vance followed up this conversation by visiting Gibbs and he warned Gibbs about the repercussions of his testimony. Gibbs was going to be asked about the assault. His testimony will then become public record and it could potentially cost him his job at NCIS. Not that Gibbs cared. Gibbs wanted to take down James more than anything and so he was willing to risk his career. Nothing was going to stop him from testifying.

The team meanwhile was looking for evidence. They needed to know to find out how James arranged a murder for hire and their usual suspects like his lawyer were out. McGee knew the lawyer really well. He was smarmy but he wouldn’t arrange a murder for his client and so that left everyone else who visited James in prison. The team spoke to James’s ex-wife. She said she only visited because she and James were going through a divorce and she needed him to sign paperwork.

She also said that James was with someone new. She ran into her in the waiting room and the young woman had practically threatened her to stay away from James. The young woman was identified as Hanna Devereaux. She saw footage of James’s arrest and she became obsessed with him. Hanna started writing him letters.

James replied by asking her to visit him. Her obsession was so concerning that her father became worried when she didn’t return home one night and he told Bishop that Hanna left behind her cell phone as well. This coupled with the fact that the team found the car and were able to determine whoever was driving was really short – made Hanna the best suspect in their murder-for-hire. Except she wasn’t hired. She must have done it for “love”.

The team eventually found Hanna when she visited James at the prison and they questioned her. They asked her if she was willing to kill the man she loves. Hanna said that wasn’t her. She claims she was in a congressman’s office trying to drum up support for James and that she thought it would help if she wrote a letter to the congressman. She wrote him twenty-three pages.

Most of it was bad rhyming. Hanna claims she has a gift for letters because James told her he fell in love with her after one paragraph and so now she lives to write letters. She even saves the ones he sends her. Bishop took a copy of one and she couldn’t find any evidence of wrongdoing. Like sure it was weird but it was legal. The team couldn’t find any concrete evidence indicating Hanna was involved and that meant they had to keep looking.

They were still looking when Gibbs took the stand. Gibbs was asked about the assault and he was asked if he regretted it. He said he doesn’t. His credibility was so shot that the jury found James not guilty. James claims he invested the money he took from clients and that he lost it on the market and the truth is he exchanged thirty million dollars for casino chips.

Casino chips never expire. They were easier to hide and so James still had a nest egg. He also still has a wife. His wife paired her cell phone with the car used to kill Benson and the team had enough evidence on her to arrest her for murder. They then told Charlotte that if she didn’t talk, she would be taking the fall alone and so she turned on her husband. They were both arrested for Benson and Wilson’s murder. And the team closed their case.

They tried to call Gibbs to tell him about it but he was ignoring their calls.