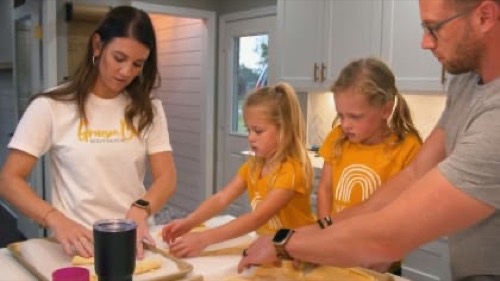 Tonight on TLC Outdaughtered the reality show starring the Busby family returns with an all-new Tuesday, April 6, 2021, episode, and we have your Outdaughtered recap below. On tonight’s Outdaughtered Season 8 episode 7 “Nacho-Typical Thanksgiving,” as per the TLC synopsis, “As the Busbys get ready for a busy Thanksgiving, Danielle’s health issues start to take centre stage.

Blayke must face her fears when she has to get two teeth pulled. The Quints get a crash course on the importance of being thankful.”

So make sure to bookmark this spot and come back from 9 PM – 10 PM ET! for our Outdaughtered recap. While you wait for the recap make sure to check out all our television recaps, spoilers, news & more, right here!

In tonight’s Outdaughtered episode, the episode begins with Adam and Danielle playing football with the children. The next day, Danielle is cooking in the kitchen with the girls, they are making crescent rolls. She tells the children that Blayke is going to get some teeth pulled. A few days ago Hazel had to get a filling and she was giving laughing gas, it worked really well, she didn’t even flinch with the drill in her mouth. Blayke is super nervous for the dentist, her dad assures her that she won’t feel anything and Hazel says it’s true, she didn’t feel anything when she got a filling.

Adam and Danielle are coloring turkey pictures with the kids, they are supposed to disguise their turkey so it doesn’t look like a turkey. They are really trying to help the children understand what the meaning of Thanksgiving is, not just turkey and mashed potatoes with gravy. The girls are five, you can’t expect a whole lot, but they want them to understand that they should be thankful for something.

Danielle doesn’t feel well, and over the last six months, it has been getting worse. The migraines and the next pain are pretty constant all day. Her arms get tingly, she can feel them but she can’t feel them. She has been getting heart palpitations and they have been pretty scary. Every day she is in pain and she doesn’t understand why she is not getting better. She hasn’t told Adam everything, she tries to do everything she can, what she needs to do to take care of the family. She knows something is wrong, she doesn’t know what it is, and she is worried. If it gets any worse, she doesn’t know if she can handle it.

Danielle talks to Adam about a women’s business support group that meets in the area, they want to feature her boutique, do a pop-up event, and she thinks it is awesome because it will bring people to her shop. Adam tells her that she is setting herself up for failure, she has too much on her plate.

He knows when she has her mindset on something, there is no turning back. To take the pressure off Danielle, Adam goes shopping for the Thanksgiving dinner and takes the girls with him. But instead of buying items to make turkey dinner, he buys things to make tacos to take the pressure off of Danielle. Meanwhile, Danielle is preparing for her pop event and has called on her family to help her.

Danielle tells her sister about her week, how stressful it is and she wants to do it all but knows she can’t. She also mentions her pain and her sisters came to help because of what she is going through. She hates that she is short with the kids, but the pain, it is her way of lashing out. Her sisters try to encourage her to take care of herself. Danielle says maybe she is just stressed, her sister says she has to slow down, this could be her body’s way of telling her.

Time for Adam that he bought ground turkey and its turkey tacos for Thanksgiving dinner, she smiles. Danielle is trying to get the girls ready for the day but she woke up with another migraine. Adam tells Blayke that they are picking her up after lunch for her dentist appointment. All the girls hug Blayke and wish her luck, which helps to make her feel better.

At school, the kids are having a Thanksgiving feast outside. After lunch, they have to throw beanbags in a turkey and tell their teacher what they are thankful for.

At the dentist, Blayke says he is not ready, she is super nervous. They put a bib on her, she is afraid there is going to be blood everywhere when they pull her teeth. Adam is hoping the laughing gas kicks in quickly and she forgets why she is there. The dentists tell her that she is going to feel like she is in outer space. Blayke says laughing gas makes her feel like Hazel because she is in her own little world. The needle is typically the hardest part, but she didn’t feel it. When they go to take out one tooth, Blayke can feel it. Blayke is saying ow a few times and Danielle is having a hard time watching her. The two teeth are gone, Blayke did very well.

Danielle has her first pop-up at the shop and as much as she doesn’t want to leave Blayke with a babysitter, she has no choice. In the car, Danielle tells Adam that she is not a hundred percent happy with the setup, but it is what it is. They arrive at the shop and Adam says it looks good, the pop-up is officially happening.

Her sisters arrive and they are scared that Danielle is not feeling well and want her to see a doctor, she carried six kids and that is hard on a body.

The next day, it is taco time and everyone seems to be enjoying themselves. The kids want to show everyone what they are thankful for.

Danielle finally tells Adam about the pain, the migraines, and the fact that it has lasted for a month. She says it almost like she feels sometimes that she is having a heart attack, her arm is numb. Adam tells her she needs to go to the hospital.