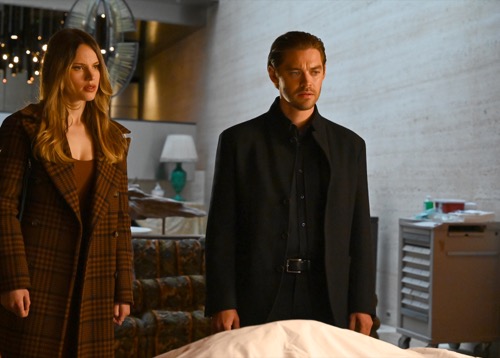 Tonight on FOX their new crime franchise Prodigal Son airs with an all-new Tuesday, May 11, 2021, episode and we have your Prodigal Son recap below.  On tonight’s Prodigal Son season 2 episode 12 called, “Sun and Fun,” as per the FOX synopsis, “As the search intensifies for a serial killer on the run, so does Malcolm’s tenacity, causing U.S. Marshal Emily Ruiz to kick him off the case.”

In tonight’s Prodigal Son episode, the serial killer known as “the Surgeon” escaped the psychiatric hospital where he was being held. Martin Whitly was believed to have escaped with two other prisoners and the truth is he was never with them. He hadn’t escaped with them because he had his own plan. Or at least that’s what Malcolm believed. Malcolm was the profiler hunting Martin down and he was also his son.

Malcolm considered it a personal failure that he couldn’t find his father and so he started to act irrationally. He questioned every move he ever made. He tormented himself and it soon didn’t matter when he found a credible lead. By then, no one was willing to listen to him. He had even been removed from the manhunt for his father and taken off of the investigation. Malcolm tried to convince his friend and mentor Gil to a parallel investigation but Gil couldn’t do that because his hands were tied.

Gil had to take U.S. Marshal Emily Ruiz’s lead. She was in charge of the manhunt and he couldn’t risk running a separate investigation because NYPD did not have that authority. Gil told Malcolm he was out of luck. He was off the case and there was nothing he could do about it. But Malcolm wasn’t going to let that stop him.

Malcolm then decided to investigate this lead himself. He also didn’t want to do it alone and so he turned to his natural allies. He turned to his family. He told them about his theory and they agreed to help him investigate it. Malcolm had needed more information on Vivian. She was the in-house doctor at the psychiatric hospital and so he needed her medical file. Her history as a doctor.

Malcolm couldn’t get that information on his own and his mother connected him with an old friend. Dr. Raymond Stengal used to work with Martin. He introduced Martin to Jessica and now Jessica was using that to blackmail Raymond into helping her. He handed over Vivian’s file to Malcolm. Malcolm learned that Vivian changed course after she paralyzed a patient and things got weird from there.

Malcolm spoke with the man she was paralyzed. His name was Logan and Logan claims Vivian saved his life. He wouldn’t speak a bad word against her. He also said that Vivian would never help a monster like Martin, but that wasn’t true and Malcolm got closer to the truth after speaking to Logan. Malcolm determined that Vivian didn’t just help his father escape. He believed his father was her prisoner and he had been right.

Martin managed to call Jessica for help. Vivian caught him and she told Jessica to ignore the call. Vivian said she would make sure Martin could never hurt anyone ever again. Jessica must have believed her because she didn’t tell her children about that phone call. They were still looking for their father while Jessica confirmed he had been kidnapped by Vivian and that Vivian meant to hurt him.

Vivian had drugged Martin. She threw him into the trunk of her car and she continued to drug him from there. She even gave him something that would temporarily paralyze him. Vivian suffers from a malignant hero syndrome and Malcolm properly profiled her. Malcolm believes she was hacking up patients purposely so that she could be credited as the hero for saving the day. She di

d that with Logan and she was attempting to do the same with Martin. Vivian was especially angry when Martin called for help. She couldn’t believe he would call Jessica because she met Jessica and she said Jessica could never be his equal. Not like she can. Vivian was a twisted doctor just as much as Martin was and she thinks she can “save” him. She’d give him drugs to stop his heart and then at the last minute she would choose to save him.

Vivian was a threat. Malcolm could see it and no one else could. Malcolm’s friends and coworkers all believed Martin was the dangerous one. They suspected Martin used Vivian to escape. They also believed Martin was probably cutting her up as they spoke and so Malcolm wasn’t getting anywhere with them. He did manage to convince Dani to go with him to investigate Vivian’s storage locker.

Only Martin nor Vivian was there and that was the important part to Dani. She even said all the drugs they found could just be because Vivian is a doctor. Dani wanted Malcolm to move on and he couldn’t. He also chose the worst possible moment to give in to his feelings for her. Malcolm kissed Dani and she kissed him back. The kiss was cut short by a phone call from Gil. Dani went to answer it and, while she was gone, Malcolm saw Vivian.

Vivian returned to her storage locker to collect more drugs to use on Malcolm. She ran into Malcolm and he told her he knew the truth. He said he was willing to put himself in her hands if she would take him to see his father. Vivian couldn’t risk him calling his friends at Major Crimes and so she drugged him. She brought him to see his father. He woke up tied to a bed and he saw his father tied to a chair.

What she didn’t know was that their conversation was recorded by Ainsley. Ainsley and Malcolm had been on the phone together when he ran into Vivian and confronted her and she wisely recorded what she heard. She could prove that Vivian did in fact take Martin hostage. She also has Malcolm now and unfortunately, three is a crowd. Vivian was obsessed with having all of Martin. And she didn’t want to share him with anyone else.

This went double for his family. Vivian saw them as competition and she failed to understand that someone like Martin could never truly anyone else. Much less her. Malcolm tried to explain it and for that, she gave him a pulmonary embolism. She was working on removing it when someone rang the doorbell to the house. Vivian went to go answer it rather than save Malcolm’s life and so Martin escaped his restraints.

He saved Malcolm himself. He had just finished when Vivian returned to say “they found us”. She was wielding a knife at the time. She told Martin that she would always love him and then she cut herself. She was going to pin it on Martin. She had already called 911 claiming she was being held captive by Martin and so she had her story straight. And Martin’s position would be a lot worse than before.

But Malcolm had been left with Martin for a few moments. He told his father to run and that’s what he did however he took Malcolm with him when he did.

Malcolm had been unconscious. He couldn’t have fought back and so he was kidnapped for a second time.