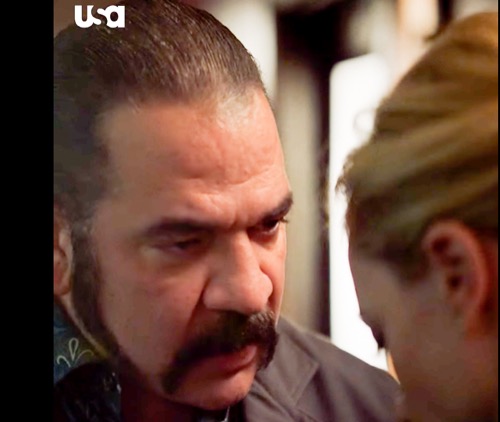 In tonight’s episode of Queen Of The South Teresa and the gang look at $3 million, the judge’s cut. Teresa directs them all to get dirt on the judge and helps victims with the money. Off to the side, Note talks to Kelly Ann about them having a baby. He wants to tell Teresa but she thinks they need to wait. It’s too soon. He promises her safety, love, and more.

Teresa and the others watch as the judge (Lafayette) is about to hold a press conference but it is unexpectedly canceled. The news reporter then issues a bulletin for Dumas with a reward of $2 million. Dumas calls Teresa. He thought she made a deal. It looks like the judge is making a power play. Just then, an associate brings them a head in a box. Before they can deal with this, two cop cars arrive. An officer arrives to tell Teresa the judge is dead and now this is war.

Teresa tells Pote to find out what is going on in Miami. James picks up Dumas. Meanwhile, Teresa is having trouble with what to do. Pote thinks one of them or all of them needs to go down for this. Either way, they are in trouble.

In the car, Pote tells Teresa they are having trouble with a ship in Mexico. She doesn’t care, pay whatever. Meanwhile, Dumas meets with Lucien. Lucien calls him a son he never had and also reminds him that he told him not to mess with the judge. He hands him an envelope and tells him to keep his head down. They part ways.

Teresa and Pote try to do damage control and help Dumas but are told by several on the street that he has a big bounty on his head. He isn’t going to last the night.

Teresa, Pote, and Kelly Ann try to figure out how to find the judge’s money, anything they can use. Kelly Ann thinks he must have a ledger. Meanwhile, Dumas is being chased. He ducks down in the back seat while James drives. It’s the cops.

Teresa, Pote, and Kelly Ann continue to work the judging problem and trying to find a way to get their ship through a port. They need someone on their payroll to help.

James and Dumas manage to escape and head to a safe haven. James thinks this is all Lucien but Dumas cannot believe that. Meanwhile, Boaz is their only hope. Kelly Ann talks to him as they have him on lockdown. He can help. He also tells Kelly Ann he can tell she is pregnant.

Teresa visits Boaz. He makes a call. He can get her ship through the port. She calls James and tells him about the judge. Just after James gets off the phone, Dumas pulls a gun on him. He wants to know what is going on. He doesn’t trust anyone now. James gives him the car keys but reminds him there is a bounty on his head.

Pote watches Kelly Ann from the street in a car as she heads into a building. James tells Dumas Teresa is on his side. She is trying to find proof the judge was corrupt.

Boaz gives Teresa all of his connections, the keys to his business. James pleads his case to Dumas. Teresa is trustworthy and loyal. Dumas sits. Meanwhile, Teresa tells Boaz to go back to Miami and take care of the business. The cops come in. They grab Boaz. Teresa offers them money. They cuff her too. The officer shares how the judge helped him when he was a boy. She offers millions, a month. The cop is ready to make a deal but he does need to take someone in. In the end, Teresa turns in Dumas. James looks upset.

Pote heads into the building where Kelly Ann went. He has his gun at the ready. He breaks through a door and finds a group of people sitting around in chairs. Kelly Ann comes running out. She is at an NA meeting. She comes outside and cries. She doesn’t feel fit to be a mother. What if she uses it again. Pote talks her down.

Teresa tells James that Boaz is heading to Miami and she will help Dumas. She didn’t have a chance. Teresa goes home and uses, upset over the entire day and everything that went down. She throws the cocaine across the floor after.