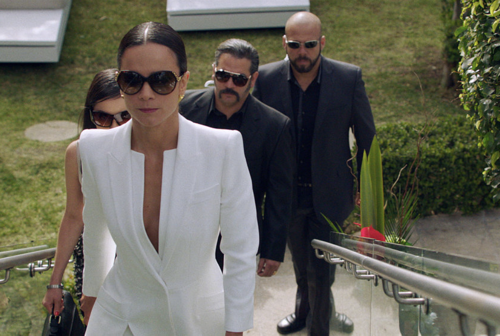 In tonight’s Queen Of The South episode, Kelly Ann and Pote are living their new lives in the suburbs of Little Rock. A neighbor invites them to an event. Kelly Ann seems excited but Pote says no way. Meanwhile, Teresa and James have found Devon’s ghost, Kostya, a Russian diplomat.

Together they visit Devon and tell him no, they will not take Kostya out. It is impossible. He doesn’t agree.

Pote wakes to a noise. He grabs his gun and wakes Kelly Ann. They work their plan. Kelly Ann hears a shot and jumps out. It’s a raccoon in their trash. Their neighbor is there.

Without another choice, Teresa and James head to New York to drive Kostya out of hiding. They call their allies in advance so they have a backup.

Kelly Ann tells Pote they need to blend in the next morning. He tells her they cannot trust anyone. She tells him she cannot do this anymore. It isn’t healthy. Kelly Ann heads over to a neighbor’s garage sale. Pote joins her soon enough. He is dressed just like a dad, ready to drink beer with the neighbors and play soccer with the kids. Kelly Ann is impressed. Pote does, however, scope out the house.

Teresa gets a call from an ally just as he and his crew are gunned down. They realize Boaz is working with Kostya.

Chicho calls Pote as he is building a crib. He tells him what went down in NY. Pote tells him he is retired but he needs to protect Teresa. Meanwhile, Teresa calls Kostya. She plans to meet him and kill him. She tells him she wants to discuss terms. He agrees to meet.

Kelly Ann finds pate trying to build a crib. He is having trouble. She’s just happy he is trying. Meanwhile, James tells Teresa her plan to meet Kostya is dangerous. She kisses him. He tells her he loves her. They spend the night together.

In the morning, Teresa tells James she loves him as he prepares her for the meeting. They arrive at a tea room later. James is forced to stay outside. Inside, they talk briefly before they toast with the tequila Teresa has brought. She takes the first shot, earning Kostya’s trust. He doesn’t know she coated his shot glass with the same poison he used on Oskana. He dies quickly. Gunfire erupts from his men. Pote comes in out of nowhere shooting. James is behind him. Pote gets shot in the chest but has a vest on. They run for it.

Teresa plans to go to Belize next. Pote calls Kelly Ann and tells her. She doesn’t answer. He leaves a voicemail. They plan to take Samara with them. Teresa leaves the bar and distillery to Chicho. James stays behind to close down their other businesses.

Devon pays James a visit and tells him he knows what he needs to do. Later, Teresa is in her home in Belize when she is shot by a sniper from a distance. She falls to the ground, bleeding from the head and mouth. It’s James.