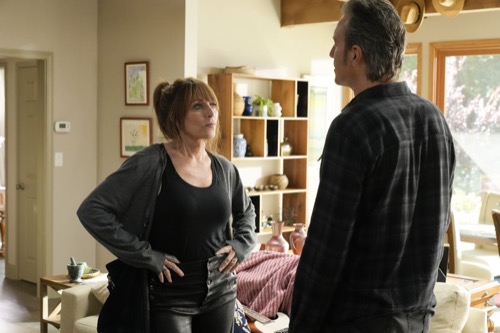 Tonight on ABC their new drama inspired by the life of Erin Brockovich, Rebel returns with an all-new Thursday, June 10, 2021, season 1 episode 10 called, “Trial Day” and we have your Rebel recap below. In tonight’s Rebel season 1 episode 10 as per the ABC synopsis, “Rebel, Cruz, Lana, and Ziggy round up an army of support to bring the Stonemore Medical case to a close.”

Tonight’s Rebel begins now – Refresh Page often to get the most current updates!

In tonight’s Rebel episode, Cruz is playing the piano, he then goes in to see Rebel and Lana, he tells them he has no regrets no matter what, he doesn’t regret taking on this case. Rebel tells him to shut up, it is the bottom of the ninth and the chips come down, that is when she comes alive. Lana tells him to go home. Rebel says she has got this, she has been through worse. She tells him that he is a fool if he counts her out now.

Rebel and Lana are on the move, she is at the police station; they picked up Sean at the border with twenty thousand dollars on him. Cassie goes into the interview room, she tells him that her star witness disappeared because of him, skips the apologies, and get to the facts. Sean says he has a little brother he hasn’t seen in two years; some lady came up to him at the skate park and shows him photos of his brother, says he is in a bad situation, his foster mother hits him and throws cigarettes at him. She showed him pictures of the burns and she says she would pay him if he trashed her, he could have enough money to give his brother a life, he is sorry.

Rebel goes out to see Lana, she tells her that they need a plan. Rebel says they don’t even know if Eureka is a business, Lana says she has some hacker friends on it.

Rebel goes to see Ziggy, tells her that Stonemore paid him to go against them. Nate comes out of his room, Cassidy as well. She tells Nate that she needs his help, she tells Cassidy to go back to Satan’s tomb or wherever she sleeps these days.

The office is full, everybody is working together, they are trying to track down where Carson is at. They found it, Carson has an account at Eureka storage. He has a storage unit, Rebel says this is fantastic, she thanks everyone and rushes out with Lana.

Rebel tells Grady if he wants to do something for this family, get Ziggy to make up with Sean. Grady tells Rebel that he is going to kiss her, she says fine, and he does.

Rebel and Lana are at the storage locker, Rebel says she can feel that they are near the truth. They open the locker and it is jammed pack with stuff. Rebel says she might have to sit down and cry, but just for five minutes.

Grady is in the car with Sean and Ziggy, they are at the location where he was told his brother is.

Nate is with Misha who says she was humiliated in court. Nate says no, his sister betrayed and humiliated herself in court. He tells her that he hopes he isn’t mad at him because he is crazy about her, he could love her, and she was a badass in court.

Rebel calls Cruz and tells him to buy her time, talk slow, do something. Lana and Rebel are still in the storage locker, Rebel asks her what she thinks about what Benji did to Cassidy. Lana says no different than what she does to her, she needs to listen to her. Rebel remembers that Carson told Randall they had a cat, she tells Lana they have to find a cat. They find a ceramic one, smash it, there is a flash drive inside.

Back in court, Cruz says he wants to spare Maddie Peterson further trauma, so he calls her doctor, Nathanial Flynn to the stand. Obviously, this is the way that Cruz is going to make time. Meanwhile, Lana is looking at the contents on the flash drive, she doesn’t understand anything, so Rebel tells them they are going to the hospital. They bring the drive to Misha and get her to see if she can figure it out.

In court, Cruz is still trying his very best to drag things along as much as he can. Cruz gets a text from Rebel, she tells him to buy more time. The judge gets fed up with him and says she needs a break, she calls a twenty-minute recess. Outside the courtroom, Helen asks Cruz what is going on. He tells her that he is buying time, Rebel is coming with proof and it is hurting him as much as it is hurting her.

Grady is working really hard at trying to get Ziggy to forgive Sean. Next, they head to the home where Sean’s brother is staying, Mrs. Melcher answers the door, Grady flirts with her while Sean and Ziggy sneak in. Sean finds his brother Danny in the room and there are burn marks on his arms.

Back in court, Cruz asks for a sidebar, he tells Benji that he wants to give him another chance to make a deal. Then, Rebel bursts open the door and walk in, the judge calls for order. Rebel has brought the Assistant Attorney General with her and Cruz tells the judge they have proof that Stonemore was testing their valves on healthy prisoners in a private prison. In light of that, he wants to give Benji one last time to settle. Cruz tells Mark that he is out of moves, and Rebel tells him that he is going to prison for a really long time.

Back in court, they have a settlement. Benji and Cruz shake hands. Rebel and Cruz hug each other. Misha kisses Nate. Rebel smiles at the judge. Everyone, but Stonemore, is happy.

Cruz is sitting at his desk, he looks at his wife’s photo and tells her they did it. His children come in and tell him that mom would be so proud.

At home, Rebel comes in and everyone is there to celebrate over pizza. Rebel asks who Danny is, Sean says he is his brother. Cassidy comes in with Benji and Lana, she says she has the next case. Rebel tells her that she forgives her because she won, then she tells everyone they are going to celebrate Benji’s loss.