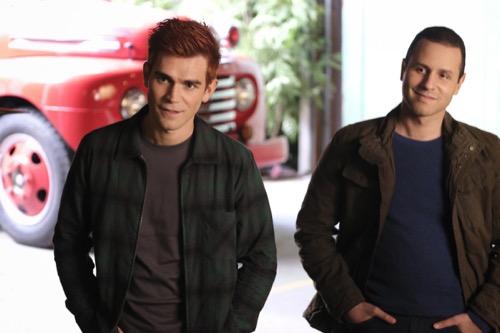 Tonight on CW their drama Riverdale airs with an all-new Wednesday, March 10, 2021, season 5 episode 7 called, “Chapter Eighty-Three: Fire in the Sky,” and we have your Riverdale recap below. In tonight’s Riverdale season 5 episode 4 as per the CW synopsis, “Following in his Grandpa Artie’s footsteps, Archie begins to recruit Riverdale’s new volunteer fire department.

Toni’s attempt to lure Cheryl out of Thornhill and back into daily life in Riverdale leads to more tension between the two.”

In tonight’s Riverdale episode, Kevin, Alice, and Betty are about to look at a body found in the swap after 3 years. Ronnie confronts her dad about Archie’s house being burned down. She tells him this is personal now even after he denies it. At school, Cheryl shows up at the River Vixens practice.

She cannot believe Toni thinks she has the right to coach them. She suggests a dance-off but Toni is pregnant. Cheryl dances against one of the ladies on the team. It’s a tie. They agree to equal control.

Archie and Ronni meet for coffee. Archie tried to get the fire department back together but no luck. Ronnie knows she can ask Katey Keene for help, her friend Jorge used to date a NY firefighter. Jackson shows up at Archie’s when he arrives home. Betty cannot match a missing person’s report to the body at the morgue.

At the bar, Archie tries to assemble a team of firefighters, asking Jackson, Kevin, and more. Betty meets with a mom whose daughter has been missing. Back at the school, Ronnie sees Cheryl. She needs her help.

Jackson talks to Archie’s ROTC class. He shows them his prosthetic leg. In Ronnie’s class, she introduces a currency for just Riverdale. She has backed it with her own money to motivate spending in Riverdale. Betty arrives home to see her mom. Alice found Polly’s cell in the swamp.

Betty visits Toni to tell her about the body she found in the swamp. She offers the Serpents to help. At Pop’s, Jug asks Pop about seeing some weird lights decades ago. He tells him and Tabitha about the weird electrical surge at the diner. The incident was unexplainable but Cheryl’s grandma was there.

Archie kicks off the volunteer firefighters academy with Bernardo. They get right to working out while Ronnie prints her own money. She gets to distribute it right away. Meanwhile, Toni is mad that Cheryl is working the Vixens too hard.

Alice, Betty, and more walk the swamp. Hiram arrives and kicks them off of his property.

Jug and Tabitha meet with Nana Rose. She tells them all about the Moth Men. She found a body and told the men. She kept the body though, putting it in a barrel of maple syrup.

Ronnie congratulates her class on circulating the money. Hiram arrives to tease her about her “pathetic” endeavors. Betty calls Glenn at the FBI. He tells her the killer who haunted her before and got away is out killing again. She tells him she will deal with the swamp issue herself. She heads out there at nightfall and runs into Reggie. He tells her she needs to leave. She pleads with him about Polly. He breaks and makes her swear not to tell anyone he told her but they found another dead body.

At the academy, a fire breaks out next door. A homeless man tells Archie and the crew his friend is inside. Archie rushes in when they all tell him not to. Ronnie calls Hiram after learning someone is flooding the market with counterfeit money. Betty brings the body to the morgue. He IDs it as a girl named Margret.

Toni confronts Cheryl. She is being selfish. Toni won’t let her act like this. She hasn’t been around for 7 years. Cheryl leaves, heartbroken, and arrives at home to find the art dealer she gave a forged painting to. The art dealer wants to talk before she calls the authorities.

Archie is in the hospitals for smoke inhalation. The sheriff shows up to talk. Hiram has a hand n this. Jackson is angry. The vet who was in the building could have died. Meanwhile, Reggie talks Hiram down when he learns the authorities know about the body.

Betty tells Margret’s mom that she has found her body. She plans to find the killer. Jug arrives at Pop’s to find the barrel Nana sent. They pull the body from the barrel. It looks alien-like. They need to call an anthropologist Jug has been reading about.

Ronnie tells her class she needs to shut down the money circulating. After she makes the announcement, some of her students admit they printed the money. Archie runs into Jackson who has a rifle. He plans to kill Hiram. The man from the fire died. Archie begs him, talking him down. Archie tells him he is struggling too but this isn’t the way. He asks Jackson to stay and run the fire department.

Jug works on his computer at the diner when the lights go out, things begin to rattle. Just like the night Pop’s told him about. He heads outside and sees a light from above. Later, he tells Tabitha what happened. He lost time too. Tabitha thinks it was a dream. He brings her out back to see a mess. Something strange happened.

The old fire chief finally decides to help Archie. Ronnie brings a fire truck to him. Archie smiles, appreciating all of the help. Alice, Betty, the sheriff, and Toni contact to work on the case of the missing girls.