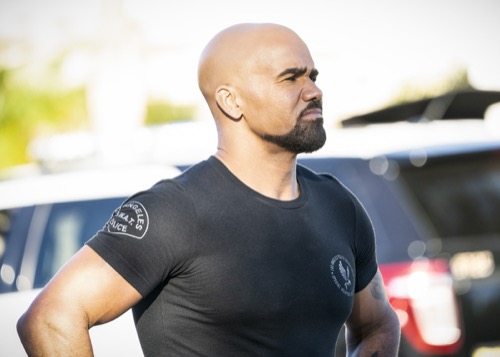 Tonight on CBS their new show S.W.A.T. inspired by the television series and feature film airs with an all-new Wednesday, March 10, 2021, episode, and we have your S.W.A.T. recap below. On tonight’s S.W.A.T. season 4 episode 11 called “Positive Thinking,” as per the CBS synopsis, “Mumford returns to work and investigates a 15-year-old cold case that holds a personal connection and leads to the discovery of a dangerous drug ring; Hondo is leery of Leroy’s motives.”

In tonight’s episode of S.W.A.T., Hicks and a retired SWAT buddy steak out a suspect. After he leaves the table at a restaurant they grab his straw.

Hondo arrives at seeing Nichelle. He finds his dad and Darrell talking to her about opening an auto shop to employ ex-cons. They are there to ask for grant money. Hondo gets into a fight with his dad. Hondo talks to Darrell after who defends the project.

Hicks and his buddy Jack follow their suspect and come upon some suspicious activity. They chase one of the men coming out of a warehouse who throws a bag at Hicks. The white powder goes all over his face. Back up arrives just in time as the suspect runs. Hicks lays on the ground coughing. Jack calls for Narcan.

Hondo arrived at the hospital to visit Hicks. He is angry he knew nothing about this situation. Hicks and Jack film him in on the suspect they’ve been trying to get for a long time. They finally have a Lee thanks to one of Jack’s formants. Jack shares that the man responsible actually killed his goddaughter years ago with drugs.

Tan brings Chris home after she made a call from the bar. She was drinking when some guy grabbed her. She has a black eye. Security took her keys so she needed a ride. Tan brings her inside and notices that there’s a lot of booze in the freezer, she looks tired and her apartment is a mess. He tells her he is worried about her.

The next day and had corners Chris arrives. Tan is annoyed to see her she was supposed to take the day off. Chris sees her black eye and she lies and says a box fell on her.

Deacon and Chris had to see Hicks. They’re concerned about Jack and his recent need to try to get in on raids although he’s retired. Hicks tells them to back off.

The team all meet to discuss the suspect that Hicks and Jack are looking for. They learned that they’re suspect his crew is making fake oxycodone. Hicks tells them that they need to find the pills and fast. Jack has other plans but Hicks corrects him.

Hondo pays Nishelle a visit. He wants to apologize to his dad but she tells them it’s OK because Darrell’s business plan is really good. She is thinking about giving them the grant money. He tells her not to do him any favors but she insists. She asks if his dad is trustworthy though. Hondo isn’t sure.

Jack tells 10 he thinks their suspect is using real estate. Tan needs to tell him to back down. Deacon needs to offer something to his kid’s school for a silent auction but he’s stuck on what to do. Tan thinks he has found their suspect’s stash house.

Jack wants in on the action but Hicks tells me as to hang back. Jack gets angry and hangs back. The team heads to the jump jump factory, a playground for kids they think he’s being used as a stash house. When they enter, the employees look very nervous and run. The team makes their way through the Funhouse of the mirrors and the lights to try and find their men. Chris and Tan get paired up and he doesn’t seem too happy about that. They see one of their suspects who jumps into a pit of Styrofoam cubes. They get him.

Jack has to us goddaughter‘s mother’s house call, Mary Beth. He asked her a few questions about her daughter’s past dating history. Meanwhile, Hicks arrives at the fun factory. The team didn’t find the suspect’s stash. Text tells them that they lost the tail on their suspect and he has learned that the oxycodone he is dealing with is even stronger than they thought.

Jack comes back to the headquarters to tell Hicks that he has learned that there’s suspect owns several properties in Los Angeles that are not under his name and he is most likely using them as a stash house. The two decide to apologize to one another for getting into a fight earlier. Jack explains that he isn’t trying to come out of retirement he just doesn’t know what to do with his free time with his wife is busy. Plus he misses his friends.

Tan talks to Chris in the locker room. He needs to know that she is operating at full speed. Chris blames herself for Erica. Tan tells her she needs to deal with all of this and work to get better. He tells her about what he dealt with when his dad died and how depressed he was but he eventually had to get up and move on.

Hicks comes face-to-face with the suspect who kicked the fentanyl in his face. He wants to know where the drugs are or he will make sure the suspect in custody is charged with murder one for every overdose associated with his oxycodone. He gives up the location and SWAT heads in.

They bust into a house to find their suspect’s brother who tells them that he is off to Mexico with the pills. They hear a truck turn on in the garage. The number one suspects back to the garage door and right out in front of swat. They take him in. Jackie is beyond happy.

Later, Tan boxes with Chris so she can get some of her anger out. Jack grabs Deacon on his way home to tell him he is going to help with the silent auction by offering parents from his daughter’s school a chance to pretend to be detectives. Hicks hits Jack up to help he can do some training. Jack agrees. Together, they head to his goddaughter’s mother’s house to tell her the good news. At home, Chris throws out all her alcohol. But goes back to the trash to grab a bottle to take a drink.

Hondo tells Darrell that he is going to finance his auto shop plans. But wants Darrell to go to a local community college to take finance classes and he also wants to be a partner. Leroy looks surprised but accepts the terms.