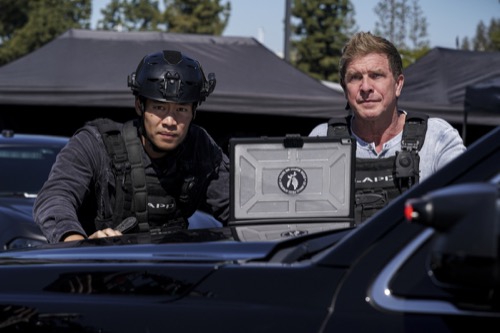 Tonight on CBS their new show S.W.A.T. inspired by the television series and feature film airs with an all-new Wednesday, April 21, 2021, episode, and we have your S.W.A.T. recap below. On tonight’s S.W.A.T. season 4 episode 16 called “Lockdown,” as per the CBS synopsis, “When escaped prisoners take control of a courthouse with Hondo and Deacon inside, the two race to save the lives of innocent civilians while trying to avoid detection themselves; Street visits his mother in the hospital and faces a pivotal decision.”

In tonight’s S.W.A.T. episode, a couple of members of SWAT were called in to be witnesses in a lawsuit. The lawsuit was against the city because a civilian was injured in a raid and so both Hondo and Deacon agreed to be witnesses. However, they wondered why they were brought in for a matter like this. The attorney representing the city had claimed the woman suing had asked for an excessive amount in damages and so they turned to SWAT because the men and women on those teams were highly respected.

Hondo and Deacon didn’t like being used. They only agreed to be witnesses because technically they were city employees and they had to comply for their jobs but both men later learned the city’s attorney lied to them. The woman that was injured wasn’t being unreasonable. She and her lawyer were willing to accept a fraction of their original asking price and they were being turned down while the city’s lawyer managed to find the right judge.

By right judge, it means a judge who was known for backing the badge. Hondo and Deacon were asked to testify because the city wanted to quash the woman’s lawsuit and wanted to use the men’s reputations as members of SWAT to do it. Both men had second thoughts about testifying after they learned that. They’ve been dealing with racists cops who haven’t been fired yet and so they were tired of going along with the status quo.

Hondo and Deacon had just changed their mind when they heard gunshots in the building. The court went on lockdown and the judge closed the doors. There was no way to open them once they’d been closed and so everyone was trapped where they were. Deacon and Hondo couldn’t go outside to check on everyone. They tried breaking down the doors and they couldn’t.

Those doors were sealed shut. The active-shooter protocols meant neither Deacon nor Hondo could lead the team as they were asked to step up during the hostage situation. Four members of the Los Mag’s gang had broken free of their restraints. They killed three sheriff deputies and were threatening to kill even more if the police didn’t stay outside. The man in charge was Sergio Diaz.

He and his friends were facing capital murder charges for killing people for their gang and so they had nothing to lose. They wanted to use this situation to get a plane out of the country. Luca was in charge of the team with the other guys away and so he tried to reason with Diaz. Only Diaz wasn’t having it. He demanded the plane or he claimed they were going to start killing people. The only ones that could help at this time were Deacon and Hondo.

They managed to escape their courtroom. They told everyone who had been trapped inside to come with them and most of them chose to leave the guys. The only one who didn’t was the city’s attorney. He said he wanted to take his chance and so the guys left him behind. They went on to guide those that did come with them and they got them out of the building. The two men could have also left with the freed hostages but they chose to stay behind.

They thought they could do better for the people in the building by staying behind to help those on the scene and so they stayed behind. The team helped them from their position. They found a deputy that worked in the building. Deputy Ross said there was an additional key to the weaponry closet in her office and so the guys tried to make it to her office.

While they were traveling, they heard more gunshots in the building. They called their friends on the outside and the gunshots were just warning shots for now. The gang members wanted bullet-proof vests for themselves. They agreed to exchange hostages for the vests and they also questioned Luca while they were at it. It seems they found the list of people who checked in. They saw that two members of LAPD were on that list and so they asked Luca about it only he claimed not to know them.

Diaz didn’t really believe him. He and his crew went looking for the police officers and they found Hondo. Hondo gave himself up to keep Deacon safe. He also had Deacon’s cell phone hidden on him so that he could call for help when he needs it and in the meantime Deacon was now the one leading the resistance inside the building.

Deacon called the team on a landline. He told them that the gang members broke into the weapon safely and that they cleared out all the weapons. Neither Deacon nor Hondo was armed. Hondo was now a hostage himself and he spoke with the city attorney from before. His name was Jacobs. Jacobs was just doing his job.

He didn’t go to law school to become part of the city’s bureaucracy and so Hondo apologized to him for backing out as a witness. It hadn’t been fair to Jacobs. The two men bonded over being a black man and part of the system. Hondo even treated Jacobs’s wounds and Jacobs told him he regretted not escaping when he could. Hondo was still in contact with his team. He messaged them and so he knew that they hijacked the helicopter Diaz ordered. And they got let out on the roof of the courthouse.

Deacon and the others took the backstairs. They cleared out each floor by floor and them working with Luca who was still outside, they managed to round up all the bad guys. Even Hondo helped. He stole a gun from one of the gang members and he helped his team get a win today. They all saved the hostages.

They stopped the gang members from flying out of there and so once they did their jobs – they next focused on their personal lives. Street’s mom was sick. She needed a new liver and she couldn’t get on the registry because of her drug problem. She could die without a new liver and so she decided to not give up drugs because she thought she could just turn to Street for help. Karen’s doctors asked Street if he was willing to be a living donor. He would have to give up his liver and it would take months to grow back to its original size. And that alone could cost him his job on SWAT.

Street told Chris. She became concerned for him. She tried to talk him out of getting tested and when that didn’t work she decided to go straight to Karen. She told Karen to get clean if she wants a new liver. All she has to do is be clean for six months and they would put her on the registry. Karen didn’t want to do that but Chris told her she wasn’t going to let her ruin Street’s life. And so Karen told Chris that she must really love Street.

And that’s been something Chris has been denying to herself for a very long time.