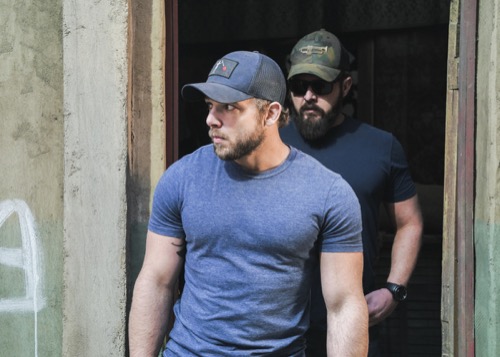 Tonight on CBS their new military drama Seal Team airs with an all-new Wednesday, March 3, 2021, episode and we have your Seal Team recap below. On tonight’s Seal Team season 4 episode 8, “Jason returns to Bravo; the team goes on a mission to recover military drones in Syria; Sonny gets surprising news from Texas.”

In tonight’s Seal Team episode, Bravo team goes into a meeting, and on a chart, there are the next three months. Jason says it is not going to work, they don’t fight behind a computer. Jason tells Wes that Bravo has a way of doing things around there, he will get used to it, and it works. Wes says he is there to keep them working. Ray tells Jason he is heading out, Jason wishes he was with them.

Jason is home, his daughter is with him and she asks him if it is going to back to the way it was. He asks her if she plans on spending her whole break home checking on him, she says yes.

Ray is home packing up, he says he is going to be comfortable when he gets back to work, and he is happy the day is there. His daughter walks in and asks if he is leaving again, then she reminds him that the last time he went he got hurt. He tells her that it is ok to be worried, but his job gives him lots of chances to be brave, it also gives her chances to be brave. She asks him if he has to go, or if he wants to go. Ray hugs her, then hugs his wife.

Sonny is going to the gym, he asks Lisa to join him. She tells him she wants to leave Bravo and tell the guys that they are together. But, she doesn’t want people to think she changed her assignment for a job. He tells her to stop looking for the clouds because there is nothing but sunny skies ahead.

Clay is home in bed, he gets up and then talks about Ray and Bravo. He says he is returning to something that he loves, just like Ray.

Irbid, Jordan, Ray is walking through the streets, he looks over and sees a suspicious man tucking something into his jacket. A woman comes up beside Ray, her name is Mina, he tells her it is nice to be working with her and he assumes the shop with that man is the missing weapons she is looking for.

The arms dealers wheel and deal there the old fashion way. The owner of a shop, her asset, records them, and signals her when it is time to collect. She handles some of the danger, so this is how her asset pays her back.

Wes finds Jason in another room without the rest of Bravo and asks if there is a good reason he is not with them. Jason says Wes has to get used to his system. Wes says the team will not be dependant on one leader, Jason has a new role, he earned it.

Back to Ray, one week later, he is outside playing a game with a man. He and Mina are working, she got Ray to turn his phone and they were able to scan another man’s phone and get emails and IP addresses.

Jason is home, he says after a week of looking at computer screens, he is fed up. He finds out that his daughter wants to transfer out of NYU, he tells her that he thought she loved it there. She says it is too hard and if she transfers, she can be closer to home. They argue, she gets up and goes to see her friend.

Lisa and Sonny are in the bar enjoying a drink when Clay and Stella walk in and catch them. Lisa tells him that she is transferring to Echo. She is trying to avoid the same mistakes as last time. Clay says he is impressed, he never thought he would see Sonny commit to anything other than a frogman. Lisa asks them to keep this to themselves, she wants to cross the finish line without any speedbumps.

Ray is with Mina, she is checking GPS data when she finds their target, he says they should get an assault team out there.

Jason is home, his daughter is back as well. He apologizes for the day before and says he just wants her to make the right decision. He gets a call, she says his mission and his men come first. He tells her that she doesn’t need to leave NYU to be close to him. He says he is doing what he loves, with the BRAVO team and he doesn’t want her to give up her dream because of him. He tells her that he believes in her and he knows she can make this work.

Hannah drops by to see Sonny before he leaves, she tells him that she is pregnant.

Bravo is getting ready to roll, they are joining Ray and Jason finds out that he outranks him.

Bravo arrives, Ray welcomes the. Jason returns Ray’s watch for him that he found in Tunisia. Ray says all good, he replaced it. Ray introduces them to Mina. She says, Hadi Fidel, a Syrian national, has brokered a deal selling five Iranian drones similar to those used to attack Americans in Baghdad last month. The seller and buyer are unknown, but they are doing a deal in the next 24-hours.

Their primary objective is to destroy the drones. Ray and Jason get into a disagreement on how to proceed. When Bravo leaves the room, Jason tells him that mission planning is something they discuss together not something he openly challenging him. Ray says he is not stepping on his toes, he is a new leader and the situation has changed. Then, Jason starts giving Clay heck for not backing him, Clay says not agreeing with Ray was backing him.

Jason finds out that Ray requested to join this mission two weeks early, he wasn’t called out.

Bravo is hiding in a truck passing the border, they arrive at their target, get out and start shooting. They find the drones and start searching other areas. Bravo gets notified that vehicles are coming their way. They try to fight outside but head back inside. Sonny is trying to set the explosive when more vehicles start coming their way, he manages to do it.

Bravo is back with Mina, two drones were moved out before they got there. Sonny acts a little weird with Lisa, she is wondering what is going on with him. She tells Clay, he says he will speak to him, if he doesn’t have his head in the game, it affects all of Bravo.

Bravo is sitting down playing cards and enjoying a beer, Ray thanks them for trusting him out there today. Jason confronts Ray, he tells him that he knows he came out on his own, the Navy didn’t send him in early.

Lisa tells Ray that she found their seller, Yasin Cassin, the French Algerian leader of a para-military splinter. Ray thinks back, and he remembers the guy. Ray says he has seen him before, and he doesn’t want her to tell the guys. He says he has to handle this his own way, Lisa reminds him that the guy tortured him. He tells her not to say a word to anyone.

Jason asks Ray if he has any intel, he says no.