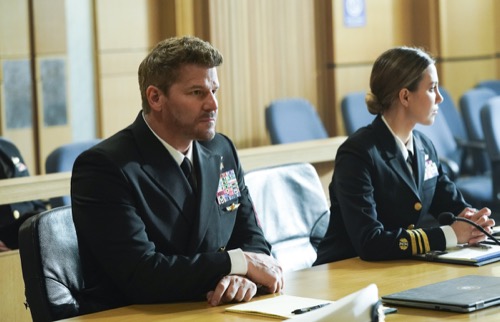 Tonight on CBS their new military drama Seal Team airs with an all-new Wednesday, March 24, 2021, episode and we have your Seal Team recap below. On tonight’s Seal Team season 4 episode 10, called “A Question of Honor,” as per the CBS synopsis, “Jason’s career and freedom hang in the balance when Command accuses him of committing a horrific crime during a mission.”

In tonight’s episode of Seal Team, we see Jason being taken into custody, giving up his belongings in front of military police. The team is waiting on news to brief them. Things went sideways in Jordan but nothing to cause this. They receive news that Bravo is undeployable for the duration of Jason’s investigation. Command has issued a no-contact order; they are to stay away from each other and Jason.

Jason is sitting in a room and says, anyone, going to tell me what the deal is here. Captain Lindell says he received an order to return to base, he knows as much as he does. Lieutenant Commander Flores comes into the room to read the charges, unlawful killing someone in a fall, he is being charged with involuntary manslaughter.

Jason is speaking to Williams; she says Jordan is upset that the US sent operators into its territory without permission and he is the pound of flesh they are offering to appease them. She secured his release from confinement, he can’t be around his team, but he can go around his routine. She tells him not to leave Virginia Beach.

Ray is on the phone at home, his wife comes in and asks what he needs a lawyer for. He says nothing. She asks him why he is holding out on her. He tells her it is Jason; he is the operator under the indictment and he can’t say, it is classified.

Jason is furious, he feels like he is being steamrolled, he is told that if he doesn’t stand down he is going to lose the most important fight of his life.

Lisa tells Sonny that whatever he decides regarding the baby they are going to get through it together.

Williams tells Jason that the prosecution thinks they have iron-clad evidence that he shot an unarmed man. Jason says it is time to start pushing back. Williams tells him to try and control himself. He says it is odd that she has not asked him what went down. She says she is far less concerned with what he says happened than what the prosecution thinks they can prove. It is his word against theirs.

Sonny, Ray, and Clay are deployed, but not with Bravo. They are heading to Columbia to go after one of the most brutal cartels. They leave in an hour. Clay says Jason must be having a hard time without his brothers.

The trial begins, the prosecution shows cell phone footage of the shooting. Jason watches it, the prosecution shows him shooting an unarmed man. Afterward, Jason tells Williams that the guy was armed and the video missed angles. Maybe a cop took the gun or a neighbor. She tells him to take a plea deal. He says he is not guilty, he is innocent and not taking the plea deal. He says the video shows they want this to go away, it is not true and he is not taking the deal. There is more than his freedom at stake here.

Lisa says it feels wrong to be rolling out with Jason’s career on the line. Sonny asks Ray how his deposition went, but he won’t answer, he says they are not allowed to talk about it. Meanwhile, Jason and Williams are going through all the paperwork in the file. Williams finds out that Ray’s deposition is sealed, he has a lawyer. Jason asks why he needs a lawyer. She tells him that he shares the blame with Ray he could reduce the charges, and it may be his only way out of this.

Jason goes in to see Lindell, he tells him that his fight is not with him, but he never thought he would go out like this. They gave him two options, a plea deal or sell out his team-mate. Lindell tells him to take refuge in the people he is closest two outside these walls because even he will not be able to fight this fight alone.

Clay and Ray are talking about what is happening to Jason, Clay says they have movement. It’s the guy they are looking for, Perez, but he is with his young daughter. Sonny says Jason is on trial for killing an unarmed man, and here they are doing the same thing in front of this guy’s daughter. Ray says he is responsible for killing tons of people. Ray says they don’t pick the ops, they just do what they are told to. Clay says if they don’t take out Perez, more innocent people will die. Sadly, you don’t pick your parents.

Jason is in the bar having a drink when Mandy comes in, she says she is just there to collect a few things, her flight leaves in a few hours. She heard what he has been charged with, she is so sorry.

They have a shot, they are just waiting for the daughter to move. The lights go out, the target is not hit. Clay reminds Ray that if Perez doesn’t get hit, they are going to be responsible for another bad op. Enemy vehicles pull up, the team ducts and are not seen. Ray couldn’t get the shot, so Clay takes over. They hit the target and few men come into the barn where they are.

Jason tells Mandy the options that he has. She asks him what he is going to do, he says he is better at making a decision when bullets are coming at him.

On the plane back home, Clay questions why Ray is acting weird about Jason. Sonny gets in the middle and reminds them that they need to toe the line. Sonny sits with Lisa and tells her that he is sorry about this whole baby thing, she understands.

Clay is home with Stella, she says she made peace with what ops could do to him, but she doesn’t think she could handle his being dragged through the mud like Jason, but she is going nowhere. He tells her the team is coming apart at the seams, he prefers to be there with her, but he has to go. She smiles and tells him to go already.

Back in court, Lisa is questioned. Sonny gets a text from Hannah, it is a live ultrasound of the baby.

Lisa gets out and tells Ray that she feels guilty about what she said, it could be twisted. Ray tells her that he has been called in again.

There is a knock at Jason’s door, it is Clay. He tells him the deposition is tomorrow, so he is technically not a witness yet. Jason says he is going to fight, go in there with gun blazing. Clay tells him he will beat this. Jason gets a call, trial council found out the man he shot was Ray’s torturer, they think he shot an unarmed man out of revenge, they upped the charge to murder.