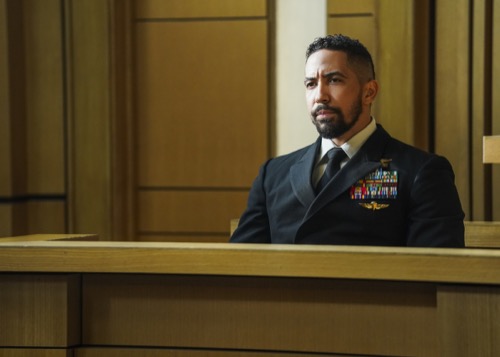 Tonight on CBS their new military drama Seal Team airs with an all-new Wednesday, April 7, 2021, episode and we have your Seal Team recap below. On tonight’s Seal Team season 4 episode 11, called “Limits of Loyalty,” as per the CBS synopsis, “Jason is put on trial with a potential career-ending outcome, without knowing if his closest friend, Ray, has his back. Stella moves in with Clay; Sonny visits Hannah to help her prepare for the arrival of their baby.”

In tonight’s Seal Team episode, the charges against Jason were serious. The NAVY were charging him with the murder of an unarmed Jordanian citizen and there was so much evidence. There was footage of the shooting. The people in authority also learned why Jason went off-mission and that’s why they upped the charges.

They believed he killed a man in revenge for what happened to his friend Chief Warrant Officer Ray Perry. It was common knowledge that Ray served as Jason’s second for a number of years. The two were close and Jason went back out into the field to rescue Ray after he had been kidnapped. However, the NAVY wants to turn the two men against each other. They’ve spoken with Ray and they’ve asked point-blank about what happened and Ray had to answer.

Ray tried to be as vague as possible. It just didn’t do any good because the institution still has the evidence and they were willing to overlook BRAVO Team’s long record of valor. Jason was in serious trouble. He could go to prison and he could even be given a dishonorable discharge. The only thing he didn’t have to worry about was the media attention.

The NAVY was ordering a total media blackout and so that meant Jason didn’t have to worry about his family or be vilified in the press. Jason would have been tried by the press as well if this got out. The NAVY was taking so many precautions that they ordered a no-contact order amongst the team. They shouldn’t be talking to each other and Clay definitely should not have gone over to Ray’s house to ask him what he’s doing.

Jason had been scared that his friend would turn on him. He heard that Ray could be in legal trouble as well if he chose to keep quiet about what happened and so the deal that the NAVY was providing was a good one. They were willing to give Ray immunity in exchange for his testimony against Jason. Jason didn’t know what Ray planned to do however he was aware of Ray turning on another member of his team and that’s why he doubted Ray would stick up for him.

Jason more trusted his lawyer. His lawyer was Lieutenant Commander Williams and she was competent. She told Jason what to do. She also advised him not to lose his temper and so the two worked on it together. They also had help from Jason’s daughter Emma.

Emma came back to town to help her dad. She attended every session with his lawyer and she also told her father not to doubt “Uncle” Ray. Ray was a part of their family. She knew Ray would never turn on them and so she did her best to handle her father’s paranoia. Only Davis was the one who found something they could use. Jason is being accused of killing an unarmed driver and it turns out Yazeed Nefal was a terrorist.

He created propaganda videos for his terrorist organization and Davis found the video. Jason and his team were going to use this video in court, but the judge struck it down because he said the defense was putting the victim on trial and he’s no longer around to defend himself against the charges.

Jason lost his temper in court after the judge struck down their evidence. His lawyer told him he couldn’t do that again and he did his best to listen. Jason had to remain calm as his whole team was put on the stand. They were all questioned about whether or not they saw a gun on the victim and they all said no. They said the weapon must have been concealed.

Even Ray defended Jason when it was his turn on the stand and his testimony got the judge to agree to dismiss the premeditated murder charge. Jason now just faces charges of involuntary manslaughter. The prosecution also couldn’t use revenge as a motive after Ray said what said and so that meant they had to find a different motive to describe why Jason would kill an unarmed man.

Jason’s friends also spoke up for him. The one guy that doesn’t even like him that much had also spoken up for him and so that gave Jason the idea that maybe he should go on the stand. He thought he could convince the jury that he was innocent, but his lawyer didn’t want to do that because she was afraid of Jason’s losing that infamous temper and looking downright murderous on the stand. Jason’s lawyer also thought it reeks of desperation.

Jason told her that he was desperate and this is what he wanted to do. He wanted to speak up for himself. His lawyer put him on the stand and Jason once again claimed he saw the gun. He also kept his cool. He didn’t lose it on the stand and the prosecutor couldn’t push him into admitting anything.

Only it still didn’t look good because there was the video evidence. The video evidence made the case and so Willams found a tech expert that she could put on the stand who could claim the evidence was faked. Jason’s team was relying on this expert opinion. His daughter Emma couldn’t lose the last parent she has left.

Davis once again proved handy because she found a photo of the victim holding the same gun that Jason described seeing and it was a mere forty-two hours before he was killed. Jason had been right. He did see a concealed gun because how else did he describe the gun so perfectly and so his lawyer reiterated that during her closing arguments. And it was enough to sway the jury because they found him not guilty.

Jason later had a celebration party at Ray’s house. He even talked it out with Ray and Clay also apologized to Ray for ever doubting him. Sonny also announced that he was going to be a dad. He wasn’t with the baby’s mother because he was secretly dating Davis and it turns out the two were going to keep working together because Jason’s trial got them all in trouble. Davis couldn’t transfer to ECHO now. She and Sonny talked about it. They realized that Davis staying on could mean the end of their relationship and so they weighed their options.

The rest of the team however talked a little too loudly about what happened at court because Ray’s wife found out what really happened on their trip and now she’s angry that Ray isn’t telling her everything.

And later Jason read the book that his daughter compiled. It was of letters written by Jason’s team members and former team members who’ve all said how great a leader Jason was.