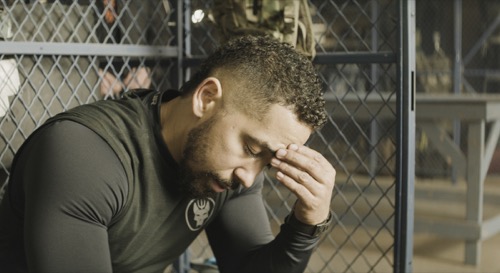 Tonight on CBS their new military drama Seal Team airs with an all-new Wednesday, April 21, 2021, episode and we have your Seal Team recap below. On tonight’s Seal Team season 4 episode 12, called “Rearview Mirror,” as per the CBS synopsis, “Jason’s visit with a former teammate causes him to reevaluate his role as team leader; several Bravo members grapple with their personal relationships when command sends them on an unexpected mission to the coast of Africa.”

In tonight’s episode of Seal Team, BRAVO Team was back to their old selves. They were going to the gun range together and they were hanging out like nothing happened and everything was okay. The team even presented Sonny with baby gifts. They got him gifts for his child because they weren’t going to make it to the baby shower in Texas and the team picked some unusual gifts. They included miniature booze.

They also got him adult diapers and so the gifts were a mixed bag for both Sonny as well as the baby. The team had plenty of laughs when they were talking about Sonny becoming a daddy. However, there were cracks that were there that weren’t there before. Clay spoke to Davis and he found out her transfer was tanked after she assisted Jason with his trial. Clay asked what that meant for her and Sonny. And she shrugged.

Davis didn’t really want to answer questions. She went back to work and Clay went home to Stella. Clay and Stella were discussing getting a new place together. Their old one doesn’t work for either of them anymore and so Stella was eager to move again. The two were at that stage in their lives when they realized they wanted each other as well as wanted the dream. They wanted a family together and they took inspiration from Ray. Ray was a family man.

He inspired Clay and it turns out Ray’s family wasn’t as perfect as it looked. Ray’s wife Naima was still angry with him for keeping secrets. She found out he and the team killed the man who tortured him. She wondered why she had to find out by listening to the guys and not from her husband. Naima has Ray sleeping on the couch as they go back and forth about his priorities.

Naima wants her husband to talk to her. She wants him to tell her the big stuff and he couldn’t do that because his job was shrouded in secrecy. He also didn’t want to talk. Ray was bottled a lot of emotions right now and his family was only catching glimpses of it. Ray was with his daughter when he freaked out after hearing a power drill.

Ray was reminded of when he was tortured with one and rather than explain that to his concerned wife and daughter – he told them he was okay. They had seen him freak out. They know he wasn’t alright and so they were scared for him. His daughter was especially traumatized because she had questions that Ray was refusing to answer. Ray was very troubled right now.

He wouldn’t talk to his family nor did he lay what he was feeling on his brothers. The team calls themselves brothers and yet they kept secrets from each other. Jason was confronted about that when he sought out a former team member. Jason used to work with a man named Theo Papadakis some years ago and Theo’s career ended after he lost part of his leg.

Theo has since forgiven himself and others for what happened. Theo had been taking a lot of pharmaceuticals back then. Jason had never noticed because unless someone isn’t pulling their weight – he doesn’t notice when something’s wrong. Jason didn’t know this about himself until he talked to Theo. He later talked to Davis and she told him that the job is easy for him because he saw everyone as their call signs first.

Davis couldn’t do that. She said the team was her family and so now the question is why doesn’t Jason see them that way? Jason dropped Theo the moment he stopped being useful. He didn’t reach out to Theo or accept Theo’s request to a BBQ to celebrate his new prosthesis. Jason called the team his brothers but did he always treat them that way? No. He didn’t even see Ray was struggling and so it was Clay who stepped up to help Ray.

Ray had needed a place to stay. Clay offered his couch and Stella was fine with it. Stella remembers that a month ago she was holding Naima’s hand worrying about whether or not Ray will come back and now the two were sleeping separately. Stella later told Clay that this puts everything in perspective.

Later, CHARLIE Team stood down after their IOC was injured. BRAVO Team was given their assignment and so they packed their bags and they made peace with leaving. Sonny was upset that he was going to miss out on the baby shower. Jason assured him that he missed out on several of his kids’ moments and that they turned out fine. Jason also dropped his dog off at Theo’s. He needed someone to watch his dog as he was away for two months and Theo agreed to do it.

Theo also told Jason that he didn’t have to make things up to him. The people that Jason should be worried about was his team. They needed Jason to help them outside of a mission and it doesn’t help when Jason refuses to see the problems.

Jason assured his bosses that his team was primed for the mission. Only he failed to notice the tension between Davis and Sonny who did just recently break up. Or Clay trying to fix things for everyone. Or Ray having marital problems. Ray went home to pack a bag and he found out his wife had withdrawn a lot of money.

She said she got just in case of problems except Ray released he was the problem and that Naima was considering life without him. Naima told him that he frightens their kids. She wasn’t sure if she wanted the kids to be around him if he wasn’t going to work on himself and so there was a lot going on in the background that Jason wasn’t aware of. And off they went to Africa together.

The team was there to pick up Oruku Atanga. He was a follower of Boko Haram who no longer believes in the man or what he stands for. Atanga wants to give up information on Haram. The Americans tested him and they’ve proved he’s credible. They now want to transport Atanga to safety. First, Atanga had to make his way to a man named Moussa. Moussa has been fighting Haram for years and he’s willing to help the Americans in exchange for some much-needed supplies.

Haram has cut off all resources to Moussa’s people. They weren’t getting any fresh supply of food and so the Americans were to act as Grubhub. They had to safely deliver the items that Moussa’s people needed and he’d help them get to Atanga.

And the Americans met their end of the bargain the second they landed. BRAVO Team delivered the food and Moussa agreed to do his part.

Sonny meanwhile found out he was having a little girl and he couldn’t wait to meet her. Jason later tried to change his stance about not talking to his team and he tried Ray first, but Ray still didn’t want to talk about his trauma.