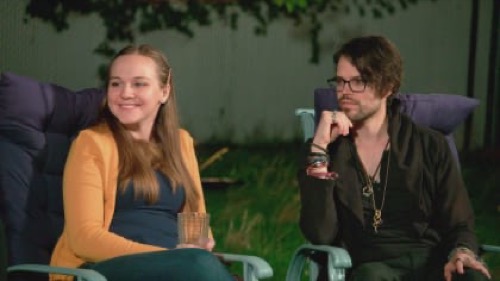 The Winders discuss courting Kimberley; the Clarks question their seeking journey; the Joneses have a rough night with Alex.”

In tonight’s Seeking Sister Wife’s episode, Ashley helps Dmitri select clothes to go on a date with Chrissy. He plans to ask her to marry him. Ashley is excited. Chrissy has no idea. Later, she shows up ready for their date.

Garrick and Dannielle head to dinner to celebrate their 13 years together. She finally tells him how he should wait to have a baby with Bert since her Visa hasn’t been approved. He doesn’t like this idea at all. He does admit if she gets pregnant and has to go to Brazil, he would go.

Vanessa and Jarrod bring the kids out back to play in the water. They talk about how hard things have been trying to find a new sister’s wife after their struggles with Kayla. They discuss a new woman they have been talking to named Crystal. She seems promising.

Tosha and Sidian are getting ready to meet with Alexandra. After she arrives for their group date, they get into a serious talk about their relationship. They want kids and are very family-centered while Alexandra isn’t sure how she feels about all of this. She is really just exploring right now.

After, Tosh cries from sadness and frustrations about finding another sister’s wife. Sidian comforts her.

Colton and his wives head outside for some time together. Since Kimberley has left, they are now getting time to talk. Colton reveals that he didn’t feel a connection with her. The sister wives respect this and share that they can move forward with caution.

Dmitri and Chrissy head on a drive. He plans to bring her back home to an oasis in their backyard and pop the question. A short time later, they arrive home to lights and decorations. Dmitri asks her to marry him. She says yes. She is in shock. She never thought this would be her life and now she cannot imagine anyone else. He puts an anklet on her, marking their engagement. The rest of the family arrives to celebrate. They discuss making it official. She is a little scared to leave her home behind.

Garrick and Dannielle get ready to go to Cabo to see Bert. They are bringing Dannielle’s parents and the kids. The producers ask the kids how they feel. They think it would be cool to have 2 moms.

They arrive after traveling at a villa they have rented. Garrick thinks the room hr will share with Bert is nice. Dannielle’s parents are trying to be optimistic. They hope they don’t feel weird if he kisses her in front of them. Bert arrives.