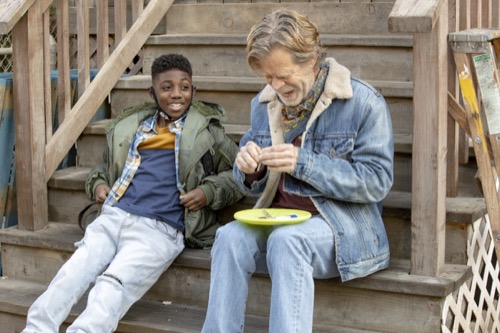 Tonight on Showtime the uniquely twisted and highly entertaining show Shameless returns with an all-new Sunday, March 14, 2021, season 11 episode 9 called, “Survivors,” and we have your weekly Shameless recap below. In tonight’s Shameless episode, as per the Showtime synopsis, “Frank wants to pull one last heist with the old gang; Lip and Brad find out who owns BornFree.

Mickey and Ian uncover the truth about Terry; Kevin watches Gemma and Amy while running the Alibi; Carl reunites with an old partner.”

Tonight’s Shameless season 11 episode 9 is going to be great, and you won’t want to miss it. So be sure to bookmark this page and tune in for our coverage of Shameless tonight between 9 PM – 10 PM ET! While you wait for our recap, make sure to check out all our Shameless spoilers, recap, news & more, right here!

In tonight’s episode of Shameless, Mickey is upset that his father is dead, Ian tells him that he knows it was his dad but he was a horrible piece of crap. Ian tells him that Terry hated him, all of them. Mickey blames him for hiring the nun. Mickey says he could have killed him a thousand times and the bitch just walks in a kills him.

Frank walks in and he says he doesn’t agree to sell the house, but if they do, he will buy it and they can live with him, he is going to step up and be a father. Carl asks him why he is going to start now.

Frank goes to the attic and pulls out some blueprints. Carl comes up, Frank tells him that he planned the perfect heist, rob the art institute.

Kev is taking care of the girls, they want to go to school and Kev tells them it is a day off from school, mommy is in Kentucky helping her mom move. Frank walks in and orders a drink. Frank tells him he has a plan for a heist, he is putting the gang back together for one last heist. Frank tells Kev not to mention anything to anyone about the heist, discretion is vital.

Mickey and Ian are in Terry’s house, Mickey found him a shirt to wear. The Milkovich family is gone, they took all the ammo and the TV. Debbie goes to take the test, they also give her a penicillin shot just in case.

Carl is in the office, he is off vice for destroying the Ferrari, he is now reassigned to the eviction unit. He provides armed support if needed with evictions. His partner is officer Tipping.

Lip is in the car with Brad, they are being followed by a black SUV.

Liam is at the department of child services, he tells them that he is trying to be proactive, his brother is trying to sell the house. She tells him unless he is abused or homeless, they can’t help him.

Carl and Tipping are on a call, and the cop and the homeowner get into a fight.

Frank goes to see his old friend, Johnny in a retirement home. Frank asks what happened to him, he says he got old. Franks said he has good news he is getting the crew back together, one last heist. Frank says he can’t drive anymore, he can’t walk and he can barely see. Franks says maybe he will sit this one out then.

V is with her mom, they are talking a walk around the water near her new home. Meanwhile, back home, Kev is telling the girls to stay out of the edibles, they are for adults only. V calls and he tells her everything is going well.

Mickey and Ian head to a woman’s house who Mickey’s father had a box in his with her name on it. A man answers the door and Mickey asks if a woman named Rachel lives there. The woman comes to the door. They go inside and sit down, Mickey tells Rachel that his father was murdered and they found some photos with her address on them.

Rachel says his father was her first love, he made her laugh, he asks her to marry him but her family was Jewish. Her father said if Terry converted and learned Hebrew, he could marry her. Terry tried but it didn’t work and when her father said a deal is a deal, Terry killed her father. So, instead of marrying Terry, she married Albert, a black man.

Liam calls Debbie and asks who his legal guardian is, she says she doesn’t know.

Frank knocks on another door, to see his friend Benjamin this time.

Frank finds out that his friend is dead, he died fifteen years ago. He asks her if she is sure, she says yes, she has it written down on a note on the fridge.

Carl is with Tipping, a swat team member showed up.

Lip and Brad were apprehended, they are in a dark SUV and are driven to a house. Once there, they are told to keep their mouths shut, they are meeting Mr. Baggio. The meeting is nothing like they thought, it is Mr. Baggio’s grandson’s birthday and he has an electric car that is not working and he asks them to fix it.

Frank goes to visit another friend, he tells him that he is putting the gang back together. The man is retired and not interested, he is retired and has enough money in his retirement to live off of.

Mickey and Ian are still going through the box, they are at the funeral home. They find out that the cheapest package is $699.00, Mickey says it cost that much to light a match! The funeral director looks into the file and finds out that Terry’s body was already transferred because nobody claimed it. They head over to where Terry was transferred, Mickey pours gasoline all over the cardboard box that Terry is in, and sets it on fire.

Frank goes back to see Johnny, he acts like he wasn’t there earlier in the day. Frank completely forgot, his dementia is showing.

V is out for drinks with her mother, she tells her that in a month she is going to hate this place. At the bar, Kev discovers that the girls ate the edibles, lots of edibles. V calls him, she tells him that she needs him to bring the girls down there to convince her mom to come back. Kev returns to the bar and finds the girls missing.

Liam is at home, he offers to team up with Frank for his heist as a lookout, Franks says no way.

Debbie nailed boards on the house and wrote on them, Lip arrives and he is mad, she says she doesn’t want him to sell the house, she wants Franny to grow up with family. And, Liam has been out all day trying to figure out where he is going to live. Lip goes up to see Liam and tells him that he can live with him.