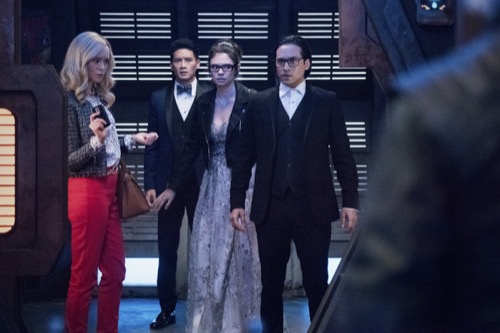 Tonight on the CW the series Supergirl airs with an all-new Tuesday, May 4, 2021, season 6 episode 6 and we have your Supergirl recap below. In tonight’s episode called, “Prom Again!,” season 6 episode 6 as per the CW synopsis, “Flashbacks reveal young Kara experiencing kryptonite for the first time.

Nia and Brainy are trapped by invading aliens; a young Cat Grant may be the reason Supergirl never gets out of the Phantom Zone.”

In tonight’s episode of Supergirl, a young Kara yells to Kenny and Alex. She tells them it isn’t safe as they all fight their enemies in blue out in the woods. A young Brainy manages to get one of the space villains on his own and takes a remote he is using for bad. None of them see a reporter secretly observing. After, they all hang out, saying goodbye to their friends, happy to have conquered the enemy. A young Kara had a lot of fun and didn’t feel so alone and alien with Nia around.

After Kara and the others leave, Brainy and Nia talk about aligning space and time using the ship from the bad guys they just fought. Nia has a vision. Meanwhile, Alex brings Kara to her prom. They have a heart to heart about their futures.

Brainy and Nia get ready to go to prom. Unaware, the reporter for the Daily Planet, who was saying earlier, somehow releases the space villains from their ship.

Kara meets up with Kenny at the prom and tells him she loves him. They both see something evil in the sky. Kara rushes to defend the planet when she is hit by a meteorite. She falls to the earth. Brainy and Nia run to her aid. She is confused. An enemy ship above wants the enemy Kryptonian. Kenny gives himself up, saving Kara.

After arriving on the ship, the space enemies learn that Kenny is not from Krypton. They make a public announcement they want the real Kryptonian. Kara wants to give herself up, but Brainy and Nia stop her. After she comes to. Alex helps pick meteorite particles out of her hand. Kara feels terrible. All she wants is to be normal. Alex decides to help her.

Nia and Brainy are out in the woods when she pulls a cougar from her dream and sends it after their enemy. They chase after them and find them with the reporter. Nia recognizes her as a young Cat Grant. Brainy and Nia realize they have changed things too much and ruined the space-time continuum as Kara is taken in by the authorities who arrive.

Alex tries to save Kara while Brainy and Nia try to decide what to do. She reminds him they have a time machine. Later, Kara gets free and tracks them down. She wants to help them. Brainy thinks this is all a very bad idea.

Alex and Kenny find Brainy in the woods. He tries to cover for himself but he is still wearing a tux. Nia runs into Cat. She makes fast friends with her, pretending to be a fan. After, Nia runs to see Brainy and Kara. She tells them Cat bought it all. Kara wonders if the future is really fixed.

Brainy ensures them they are back in time and should be all set. Kara thanks them for all of their help. Meanwhile, Cat tells Perry she is done writing for him. Brainy and Nia make several visits around town to make sure their work is done. Time returns to the beginning once again with Kara revealing to Kenny she needs to leave. But she does love him. Kenny loves her too and eves has given him. He has his own goals. She saved him and now he needs to save himself.