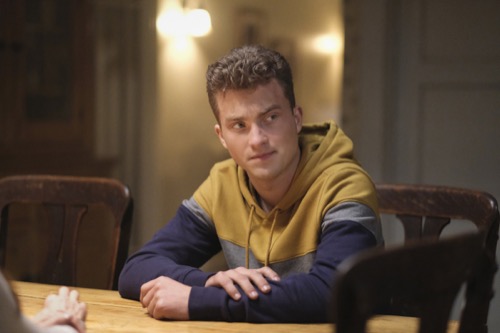 In tonight’s Superman & Lois episode, Lois employs Clark and Lana as well as others to begin her search into why Morgan Edge is sticking around Smallville. Meanwhile, Edge has gotten to Emily, changing her. The next morning, Clark and Lois see the boys off to school. Lois tells Clark that people will listen to him as they both get back to working on Edge.

At the Gazette, Lois meets with Lana and her editor. They discuss more on Edge. Lois is worried Lana is getting too close to Edge. Lana tells her she is fine. At the diner, Clark runs into Emily who seems to have a better outlook on life. Before he can think too much about this, he hears a robbery going down in Mexico. He races there and takes out several men trying to rob a bank. He is shot and falls to the ground. He isn’t getting up. Finally, Superman rises and takes out the last two robbers. The customers in the bank applaud him.

Lois races to call out Edge. He is meeting with several more people he can turn to by taking their identities away and replacing their bodies with Kryptonians. She calls him out in the front of a room of people. Edge is not afraid. No one will believe her.

At home, Lois arrives to find Clark riddled with bruises from bullets. They are both confused. She plans to call her dad. Meanwhile, Jordan has begun sneezing and he cannot stop. He sneezes icicles into his hands. Clark shows up and takes him home, assuming he is infected too.

At home, Lois and Clark tell Jordan he must have been infected by Clark who got sick after Henry used a syndicated gas on him. Knowing this was created by the military, Lois explodes on her dad. Across town, Edge prepares to invite Lana into his program.

Clark rushes Jordan to the fortress to see what he can do. Jordan is getting worse. The general shows up on the farm. Angry, Lois tells her dad to never come back. He has hurt the ones she loves.

At the fortress, Jor-El tells Clark he has to burn the fluid out of Jordan’s lungs. Clark tells Jordan who is scared. He lets Clark use his heat vision while he screams in pain. At the farm, Lois cries as Jonathan comforts her.

Sarah performs at the school talent show but doesn’t see Jordan in the crowd. She attempts to leave the stage but her dad Kyle comes to her rescue, playing the guitar.

Jonathan confronts the General about making weapons that could hurt his dad. He calls him a coward. His dad and his family wouldn’t hurt him or anyone. The general seems stunned.

At the school, Emily is singled by Edge. She walks out while her daughter is performing. Lana wonders where she is going. Kyle follows her. Lana calls Lois. Just as they discuss Emily and her strange behavior, Emily and a man show up at the farm. She tries to attack Lois and Jonathan but the general comes out of nowhere. He uses the gas. He tells Lois and Jonathan to run to the barn as he battles them. He gets knocked out.

Jordan is finally all right. Clark gets emotional, telling him he is sorry his life has changed too much because of him.

In the barn, Jonathan uses a gun he took from the RV to take out Emily and the man. Kyle arrives. He is one of them. Just as he is about to kill Lois and Jonathan, Clark shows up.

Lois gives her dad a cold compress for his head. He is sorry for everything. From now on, the family is his priority.

Kyle arrives home and tells Lana he blacked out. Something happened. She asks him if Edge made him an offer. At the farm, Lois’ editor thinks she has something. They get back to researching Edge. Just then, Clark is called. The ELT. He rushes to meet none other than Edge he confesses he isn’t from this planet. He floats into the atmosphere, calling Clark “brother.”