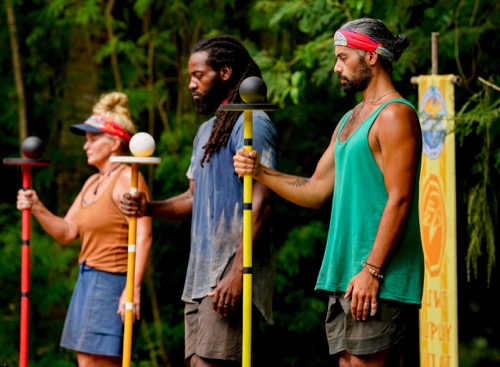 Tonight on CBS Survivor airs with an all-new Wednesday, November 24, 2021, Season 41 Episode 10 and we have your Survivor recap below. On tonight’s Survivor season, 41 episodes 10 called “Baby with a Machine Gun” as per the CBS synopsis, “After a grueling season with no food, a warm meal is up for grabs at the reward challenge, and the immunity challenge will be a test of focus and balance.”

Tonight’s Survivor episode begins with night 17 in the Viakana tribe, everyone is returning from Tribal Council. Everyone is shocked to see Naseer gone, but Naseer is happy with the outcome. Erika thinks Shan is the biggest threat in the game and she has an idol in her pocket, Erika describes that as “giving a baby a machine gun.” Deshawn goes off and talks to Erika, they speak about voting out Shan. Deshawn is in an alliance with her but he knows that if something is not done, she could win the whole game. Meanwhile, Shan is watching the two and it is making her nervous. She thinks Deshawn is sneaky and charming, she doesn’t trust him right now, she thinks he may try to pull a blindside on her.

Day 18, after a night of rain everyone is miserable. Shan speaks to Deshawn, she tells him that at this point they both have to do what is best for their own individual game. Deshawn reassures her that he wants to go to final four with her to give back to the black community because 2020 was a hard year. Shan wants to do that to, but she has made these other great connections in the game that go beyond the color lines. Shan tells Deshawn that she needs to know that she can trust him and that is hard to do right now. Shan says the next vote will tell if they have trust within their alliance.

Its time for the Reward Challenge, the players will be attached to a rope that is woven through a series of obstacles. On Jeff’s go they will race through those obstacles to the end where they will solve a Survivor star puzzle. First person to finish wins reward, best one of the season, they will be taken to the Survivor sanctuary where they will eat pizza under the stars. They will spend the night with blankets and pillows and return to camp the next morning full rested with a break from the game, and full belly.

Heather is the last one to arrive at the puzzle, but it is anyone’s win at this point. Deshawn is in the lead, but Ricard is not giving up and he is close behind him. Ricard wins the biggest reward of the season and he gets to choose one person to join him. He says Shan has not had a single reward and they have been together this whole season. He gets to choose another, he chooses Heather because she hasn’t won either. One final person, Jeff tells him that this is a strategic decision. He chooses Xander because he gave up reward so they could have rice.

Danny is happy he wasn’t chosen, this is his opportunity to make a big move. Danny tells Desahwn that they are going to be mad, but they have to take out Ricard. Deshawn says it is going to be difficult. Deshawn agrees, he thinks it is an awesome plan. Danny wants him out as soon as possible. Danny goes to speak to Liana, he tells her they should get out Ricard. Danny doesn’t think that Shan can be a part of this plan. Liana is struggling with it, she is close to Shan, but she wants to play her own game.

On the reward, Ricard wants to talk game and Shan doesn’t want to, she has to figure out what she is going to do, this is for a million dollars.

The moment Shan is back, Leana speaks to her, Shan says she doesn’t trust Deshawn but she wants the four of them in the end. Liana is emotional, she is thinking of her and Shan at the summit and how they bonded. Leana tells Shan that she has love in her heart for her, then she spills, she says last night she spoke to Danny and Deshawn, they want to blindside her and she is struggling with it, because she loves her.

They are trying to get Ricard out. Shan knew it, and that is fine, they have to play their game but she doesn’t want Ricard out yet. Shan tells her they should get rid of Deshawn. Next, Shan runs to Ricard and tells him everything, he tells her to let him process it. Ricard tells her that he is surprised that she would tell him, on a game level, not a friendship level, they are going to have to fight each other in the end.

Time for the Immunity Challenge, Xander and Erika give back their immunity necklaces. Once again immunity is back up for grabs, but this time, just one. Today they are going to stand on a narrow beam while balancing a ball on a disk. On regular intervals they will move to a more narrow part of the beam and move their hand farther down the pole making it more difficult to balance the ball.

If any point, they fall off the beam, the ball drops, they are out. Last person wins immunity and guaranteed a spot in the final seven. Losers got to Tribal Council where one person will leave the fame and join the jury. Nineteen days into this game, they don’t want this to be their downfall. Leana and Danny are the first disqualified. It all comes down to Ricard and Xander, Xander drops and Ricard wins for the second time and guarantees that he is going nowhere, for now.

Xander has decided that today is the day for Shan to go. He goes to speak to Deshawn and tells him that Shan told him that he was trying to get rid of him, Deshawn denies it and Ricard is disappointed. Shan wasn’t lying but she revealed his plan and Deshawn is happy to see her go. Erika knows Shan has an idol and if she uses that can knock out the plan, there needs to be a backup plan just in case. Erika thinks three people should vote for Shan and three for Leana, either way, one of them is going home. Danny likes the plan but he also sees that Erika has to go.

At Tribal Council, Shan says you are just one conversation away from making it another day or getting your torch snuffed. Ricard says he and Shan has a weird relationship, it really is who you can trust as long as you can. Shan says they are all liars. Deshawn says at least you can tell the truth to people who you are working with.