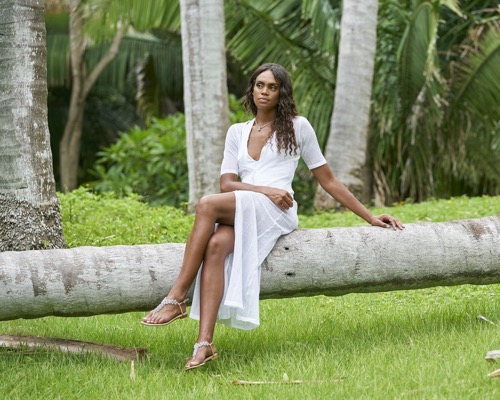 The Bachelorette airs on ABC this evening with an all-new Tuesday, December 21, 2021, episode, and we have your weekly The Bachelorette recap below. In tonight’s season 18 episode 9 Finale as per the ABC synopsis, “Michelle’s journey as “The Bachelorette” is coming to a close. With two incredible beaus remaining, Michelle’s parents and sister join her in beautiful Mexico to get to know the men who may be joining their family. The pressure is on to impress, but will they stick the landing or fall short? After each guy has met the family and taken Michelle on one final date, she’ll have a life-changing decision to make. Has she found her soulmate, and will he get down on one knee?”

Tonight The Bachelorette finale episode begins with Kaitlyn introducing viewers to the live three-hour finale. Tayshia is not there, she was recently exposed to COVID-19 and can’t be there. Bachelorette royalty is in the audience tonight, Joe the Grocer and Selena, and later a sneak peek at the next installment of the Bachelor. Michelle’s journey is coming to a close, will she be engaged to Nate or Brandon?

Michelle had a hard time waking up, she is still fully affected by letting Joe go. But, she is excited to be at the end of this journey, Nate and Brendon mean the world to her in different ways.

Brandon is meeting Michelle’s parents, but this is not the first time. Michelle tells her parents about the two amazing guys that she has left. She reveals that she and Brendon told each other that they were falling in love with each other. Her father, Ephraim, really liked Brandon, he reminds him of himself. Brandon arrives with flowers and a gift. He is ready to see the Young family, he felt so comfortable with them the first time and he can’t wait to tell them how much their relationship progressed. Brandon says he is so sick of waiting, he just wants to marry Michelle, he feels like part of the family. Brandon gives the gift to Ephraim, he bought him a pair of swim trunks because he borrowed his when he was over last time so he could be in the hot tub with Michelle.

Ephraim takes Brandon to the side to have a chat, he tells him that Michelle is ambitious, she wants to finish her Masters, and she will be very successful. Brandon says in his family his mother is the same way and he is not afraid of an ambitious woman, and he knows that she would support his dreams as much as he would support hers. Ephraim says he would accept Brandon into the family if Michelle chooses him. Next, Brandon sits with Michelle’s mom, LaVonne, and tells her hat he is in love with Michelle and he thinks she is the most incredible woman. She asks about his job and if he would move to Minnesota. He says his job is flexible and he would definitely move there, she tells him that she would welcome him into the family, and she would be so happy if he was there in the end.

It’s Nayte’s turn to meet the family, he arrives with flowers and hugs everyone. Ephraim feels a different vibe with Nayte, not as warm as Brandon. When they sit down Nayte tells Ephraim that he definitely wants to get down on one knee, it is just the logistics that he doesn’t know yet. Nayte is really not into moving to Minnesota and for Ephraim, it raises a red flag. Ephraim tells Michelle that Nayte hasn’t spoken about having children, and he hopes that he has the same qualities that Michelle has. LaVonne is next with Nayte, she asks him right out if Michelle is the one, he says saying the one for him is cliché, his mind and his heart are pointing at Michelle, he doesn’t take love for granted. She tells him that’s she doesn’t feel like at the end of this he would be ready for an engagement. He says if he is chosen, he will get down on one knee. If she doesn’t choose him, he doesn’t know because he really hasn’t thought of anything negative. She says she doesn’t feel like he is open with his emotions.

LaVonne tells Michelle that she had a harder time connecting with Nayte, she wasn’t feeling the warmth, and she doesn’t think he is ready for an engagement.

It is time for Michelle to have her final date with Brandon and she hopes that after the date she will find the answers she is looking for. The two go on skidoos together and when they take a break, Brandon tells Michelle about the nice things her parents said to him. The date was monumental and fun for Brandon, he can’t wait, his main goal is to marry Michelle in the end, he wants her for his future wife. Later that evening, they sit down a talk and toast to each other. Michelle says their date was one of her best. Brandon has a gift for her, he gives her his sweatshirt, its his favorite in the whole wide world.

Brandon tells her that he love her, just loves her. She says there is something weighing on her, he has been so opened with her and she is not falling in love with him, she is already in love with him and he really makes her feel loved. He says he has never felt this way about anyone and he doesn’t want to go through life without her. She says Brandon is the love she is looking for.

It is time for Michelle to have her final date with Nayte and he is not feeling too confident after meeting her parents because he didn’t get the affirmation he was looking for. They both participate in a ritual that is meant to help them open up and get closer together. He is putting in effort, but he is uneasy and Michelle doesn’t feel she is getting enough from him and if his walls continue to be up, that is a deal breaker for her. Later that evening there are more I love you going back and forth and Michelle feels like she got the last bit of emotions that she wanted from Nayte. Any fears or doubts that she started the night with are gone. She trusts her heart and her heart is telling her that he is her person.

Michelle returns to her room and finds a letter addressed to her, it is a love letter from Brandon. The next day Michelle wakes up confused, she loves two men and they love her – they gave her everything she asked for.

Michelle’s journey is about to come to an end, it is either Brandon or Nayte who will be her person.

Brandon is the first man to meet Michelle at the altar on the beach and tells her that she is the one he has been searching for his whole life and he doesn’t want to spend another day without her. She says she has truly never met anyone like him but she promised herself that she would follow her heart and her heart is pushing in another direction and she has to go with what she feels and it hurts so much because he is such an incredible person. He tells her that she was worth every second and he will never regret giving his heart to her, he will always be there for her. He kisses her on the cheek and leaves, heartbroken and crying.

Time for Nayte meeting Michelle down at the beach and he tells her that he always wanted to run away with her. She tells him that she felt a connection the moment he walked out of the limo and throughout their journey she was worried she was more in love with him, but she is not willing to walk away from this without him because she has never felt a love like this before and doesn’t want to think about waking up beside anyone else but him. Nayte gets down on one knee and proposes to her, she says yes and he puts a ring on it.