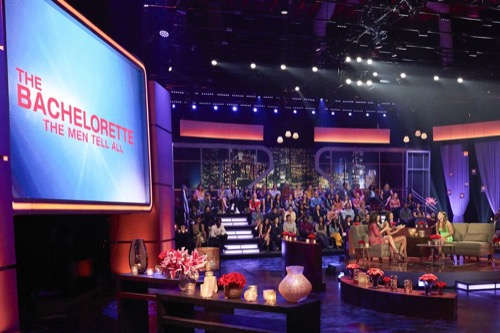 The Bachelorette airs on ABC this evening with an all-new Monday, July 26, 2021, episode, and we have your weekly The Bachelorette recap below. In tonight’s season 17 episode 8 as per the ABC synopsis, “It’s time for Katie’s former suitors to talk it out. But first, one of the men has an emotional realization about his journey to find love, which leads to a heartbreakingly honest conversation with Katie at the resort.

Then, it’s time for the men to get real when they reunite for the first time in New Mexico to hash out all the drama and laugh at their mistakes, all in front of a live studio audience. Plus, a look at the final two episodes of the season.”

In tonight’s The Bachelorette episode, it’s the Men Tell-All! All of your favorite men from this season are back to answer some much-needed questions and, before we get to the juicy part, there was a catch-up with Katie. Katie was doing Hometowns. The top four men are introducing Katie to their families and she was nervous. She never made it to Hometowns when she was on “The Bachelor”.

This was the first time she’s going through this and the one she’s looking to the most is Michael’s hometown. Michael was a father. His son was a big part of his life because he was an only parent and if she chose him then she would become a mother overnight. Michael’s greatest love is his son. His son James is too young to understand that his father was on the show and so Michael told him that he’s away on a business trip.

However, the business trip lie is now hurting him. His son wants him home and he asked his father if the real reason he’s not there is that he doesn’t want to see him. Michael was heartbroken when he heard that. He did his best to reassure his son that he loves him and that he will always want to see him. He also realized something after hearing that. He realized he needed to be home with his son and so he went to go talk with Katie.

Michael later told her that he had to go home. He had to return to his son. He couldn’t stay on the show or away from his family any longer. It hurt because Michael did develop feelings for Katie and Katie did have feelings for him as well. She just knew that she couldn’t keep Michael from his son.

Katie had wanted to be selfish. She had wanted to beg him to stay and the only reason she chose not to is that James comes first. Michael has to return to his son. Now, both Michael and Katie needed to move on. Katie had already envisioned a life with Michael and now she has to learn to see a new life with potentially someone else. Once Katie and Michael were finished with their goodbyes, the show finally moved on to the Tell-All.

The first question that was asked was how was it when they first met with Katie. There were some that remembered the moment and there were a few who actually blacked it out. Then the men started to remember what else happened. They remembered how they all hated Carl.

They also hated Cody, Thomas, and Hunter. All of these men tried to turn Katie against the others as well as manipulate her. Thomas and Hunter were especially bad at that last part. The two were angling to become the next Bachelor and everyone knew it. The guys also hated Carl because Carl tried to drop a bomb on his way out of the competition.

Carl was asked about that. He said he had been hearing stuff about a few of the guys and that he tried to warn Katie about it with the best of intentions. Only everyone called “bull”. Carl said that and he didn’t mention any names because he hadn’t a single thing. He was just creating paranoia and destruction because it amused him and it was one last bid to stay on the show.

Carl was still eliminated. The other guys now all hated him and so Carl truly won not a single thing. His biggest opponent tonight was Brendan. Brendan called Carl a snake. Carl tried to claim he was talking about Thomas and everyone didn’t believe he told Katie there were a “few men” not being truthful. If it had just been the one then Carl would have said as much. Carl was full of it.

Thomas and Hunter have both said things that implied they were only out to be famous and well now they are. They’re famous for being users. The co-hosts next asked Connor to come to sit in the hot seat and boy was it hard to rewatch his old scenes. Connor and Katie hit it off at first. They had a great date and unfortunately, it all fell apart because something was off when they kissed.

Katie had wanted to fall in love with Connor. She really tried and it just wasn’t there because the kiss was lacking. Connor had felt bad. He thought he was a bad kisser and he beat himself up over it, but then someone in the audience decided to be a little daring. She said she watched the show and she doesn’t believe Connor is a bad kisser. She wanted to test her theory.

Connor was all for it and so they kissed on stage. Connor had been checking this woman out earlier and she had been checking him out. They kissed. It was great and who knows. It could turn into something. Connor and his friends amongst the cast even hugged it out after that kiss because it had caught everyone by surprise.

Next up, the co-hosts asked for Andrew S. Andrew sat down in the hot seat and talked with them about the relationship with Katie. Things started out great between the couple. They had instant chemistry and Katie truly enjoyed it when they kissed. She didn’t find anything lacking. It, therefore, came as a shocker when Katie ultimately chose not to give him a rose.

Katie had told him at the time that she was developing deeper connections with other guys and that she didn’t mean to hurt him or lead him on. She was truly glad that they met. He changed her life and he told her that she would remain dear to him for the rest of his. Andrew was used to heartbreak by then. He was still confused about where it went wrong because there was no one moment he could pinpoint.

Andrew even remembers how well it went when they discussed interracial relationships. He said everything Katie had said had been on point and so it was clear he still doesn’t know what happened to change their amazing chemistry. The next person they called to sit down in the hot seat was Michael. Michael left the show to be with his son.

His son had needed him and he had to leave behind what he started with Katie. Katie and Michael had great chemistry. She envisioned a future with him and so his leaving did put an end to what could have been. Michael found it hard watching their scenes together. It did bring him back to that mindset of being conflicted and he wouldn’t have changed anything about their time together.

Their time together showed him that love could find a way. Michael also got to laugh and enjoy himself with both Katie and the rest of the cast. The guys bonded over their shared time together. The co-host Kaitlyn was also in for a surprise when her fiancé Jason came out. Jason came to show an unaired moment between himself and Kaitlyn and it was the moment he proposed.

He proposed while she was shooting her podcast. She had been so shocked that she just started cursing and leaning back in her seat like she couldn’t believe what was happening. It was a sweet, precious moment. Kaitlyn found happiness with the love of her life and Katie was just trying to do the same. Katie finally came out later on.

Katie got to see the men she said goodbye to. She also revealed that she did move on after Michael left and so there was no chance of a reunion. Not with her and Michael and not with her or anyone else she said goodbye to. Katie also called someone mistakenly by the name Thomas. That one hurt because literally everyone hates Thomas and so Katie had to apologize for that one.

She also told Carl he had been right. There were guys there that were there for the wrong reasons. Thomas had been one of them. Thomas didn’t show up in person. He did a video call and he took the time to ask Katie what went wrong between them because there was a sudden shift. She said she remembered at the time that he didn’t feel genuine as he was talking to her and that’s why she eliminated him.

Katie didn’t mean to hurt him or anyone else. She said if she did that, that she was sorry and Katie did enjoy her time with everyone. She hugged all the men after the show was over. She also seemed to have been happy with the choice she made. Whatever that choice may be.