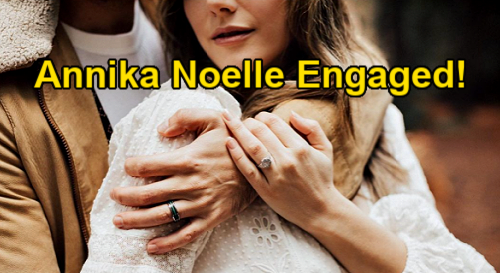 The Bold and the Beautiful (B&B) spoilers has some fantastic Annika Noelle (Hope Logan – Spencer) news to pass on about the popular B&B star. Annika Noelle, who portrays Hope Spencer (nee Logan) on the CBS soap, recently announced on her Instagram feed that she got engaged.

Annika shared a photo of herself and her husband-to-be with her engagement ring taking front and center in the photo.

Annika recently marked her third anniversary on B&B, and it’s been a tumultuous three years at that! As B&B viewers know, Hope reunited with Liam Spencer (Scott Clifton) not too long after returning to Los Angeles.

Hope ended up pregnant with Beth Spencer (River Davidson and Madeline Valdez) and then supposedly lost Beth during childbirth.

But the reality was that the presumed-dead Beth was kidnapped and illegally adopted to Steffy Forrester (Jacqueline MacInnes Wood) and raised as “Phoebe Forrester” – that is until Liam realized what had happened, and he and Hope eventually got Beth back in their arms.

It was quite the ordeal, and Hope suffered a lot of angst during that terrible time.

Well, now Hope has been shattered by the news of Liam’s infidelity with Steffy…again. Look for more emotional scenes during the week of January 11-15, as Hope lashes out at both Liam and Steffy over their night together and Steffy’s pregnancy, which could be the result of that one-night stand.

But back to Annika’s engagement, details are sparse, since she didn’t elaborate on how it all went down. Annika’s only comment that accompanied the photo of her ring reads simply: “She said yes.” Annika didn’t reveal the name of her husband-to-be, but it’s very likely her boyfriend Zach Fisher.

Since Annika doesn’t have comments/replies enabled on her posts, fans or Annika’s B&B co-stars haven’t weighed in on her announcement, but we’re sure that everyone’s thrilled with the happy news.

We wish Annika all the best on her engagement! Stay tuned to B&B and don’t forget to check CDL frequently for the latest Bold and the Beautiful spoilers, daily episode recaps, and news.