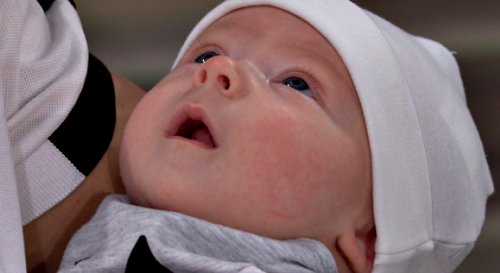 The Bold and the Beautiful spoilers (B&B) reveal that Steffy Forrester (Jacqueline MacInnes Wood) mentioned a potential issue with John “Finn” Finnegan’s (Tanner Novlan) adoption. They need to know Finn’s biological family’s medical history for their son. Were Steffy and Finn bringing this up a foreshadowing of a mysterious health crisis for Hayes Forrester Finnegan?

B&B spoilers reveal that Finn and Steffy seem to be getting a handle on adjusting to Hayes being born. They aren’t getting much sleep, have barely eaten and seem a bit frazzled.

Of course, this could just be the new parents not being able to get food in their stomachs and only sleeping an hour at a time. However, there was one scene when Ridge Forrester (Thorsten Kaye) came over and the baby seemed fussy.

It might not mean anything or it could just be the beginning of a medical crisis for the newborn.

Finn and Steffy were surprised by the arrival of Jack Finnegan (Ted King). The groom expected to see him at the wedding but they haven’t even finished planning their big day yet. Jack showed up unexpectedly, so that worries Finn a bit.

Jack lets “SINN” know that everything and everyone is just fine. Then, he starts talking to Finn about his adoption. That’s when he tells her the truth about Jack and Li Finnegan (Naomi Matsuda) being his adoptive parents.

Steffy asks some questions, such as if he knows who his real parents are or if he’s met them. The answer is no to both of those questions. This brings up another concern for Steffy.

The Bold and the Beautiful spoilers reveal that Steffy accepts Finn’s adoption. However, she is concerned that they have a new baby and no details on the biological parents.

However, there is a twist in this storyline. The real reason Jack has arrived early is that he probably knows the names of Finn’s biological parents. Jack and Li seem determined to hide the truth. Why does he insist on keeping the identity of Finn’s mom and dad from him?

The Bold and the Beautiful Spoilers: Secrets Can Kill

It’s possible that Hayes will end up having a health emergency. Without knowing what kind of health conditions Finn’s biological family has, the doctor will just be guessing what’s wrong with Hayes, which could lead to the wrong medication.

There is also the chance that Hayes has a rare, genetic condition. Having the medical information of his family would save the doctor hours, even days of work.

This is because they could just test Hayes for what is already running in his family. Without the medical information, Hayes might not get tested or treated for the right condition. If doctors have no idea what you have or what treatment you need, it could be fatal

If Jack and Li lie about the identity of Finn’s adoptive parents, what is his reasoning? Could keeping that secret end up taking the life of baby Hayes? Why would they just not be honest from the very beginning? We will have to keep watching the CBS

Be sure to catch up on everything happening with B&B right now. Come back often for CDL The Bold and the Beautiful spoilers, news and updates.

The bride, the groom, and the bombshell 💣 Are you ready for this #BoldandBeautiful