The Bold and the Beautiful Spoilers: Bill & Quinn Team Up to Sabotage Katie’s Relationship with Carter? 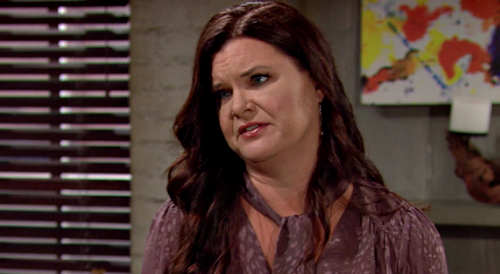 The Bold and the Beautiful (B&B) spoilers tease that Bill Spencer (Don Diamont) and Quinn Forrester (Rena Sofer) could team up to sabotage Katie Logan’s (Heather Tom) relationship with Carter Walton (Lawrence Saint-Victor). Will these schemers become allies with a common goal?

Quinn turned down the chance to run away with Carter, but she could live to regret that decision. Now Quinn will have to face the reality of giving up both her connection to Carter and the passionate void he filled.

Eric Forrester (John McCook) still can’t perform in the bedroom, so Quinn will have to forgo that completely now that the arrangement is off.

That could lead to trouble, especially since there are obviously deeper issues in Quinn and Eric’s marriage.

The big theme B&B keeps pushing is that Eric’s afraid of being alone.

If that’s true and Eric is merely with Quinn to avoid being lonely, there’ll be more problems once a better option comes along.

Donna Logan (Jennifer Gareis) could become the new queen of Eric’s heart after she comes clean about her feelings and revives their old spark.

What happens if Quinn gets dumped in the end? What will Quinn do if Eric decides he wants a divorce after all?

Quinn could find herself just as miserable as Bill if Carter’s already moved on with Katie by then – and it’s indeed looking like a hot romance is ahead for Katie and Carter.

It’s easy to imagine Quinn regretting what she gave up and wanting it back, but she might be too late.

Quinn may not be Bill’s favorite person, but desperate times call for desperate measures.

Perhaps Quinn could go to Bill and pitch the idea of plotting against Carter’s relationship with Katie.

Bill would do just about anything to win Katie over – even team up with someone like Quinn!

It’d be fun to see Quinn and Bill scheming together.

The plan might backfire sooner or later, but Bill and Quinn could still try some intriguing tactics in the meantime. As other B&B news comes in, we’ll provide more updates.

The Bold and the Beautiful spoilers say Quinn and Bill won’t be happy about Katie’s budding new love with Carter, so stay tuned to see if their mutual disapproval results in an alliance.

CDL will have lots of other great Bold and the Beautiful spoilers, updates and news, so make us your number one source.