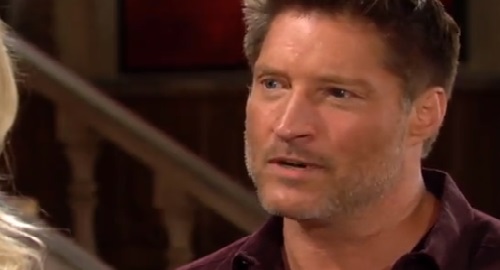 The Bold and the Beautiful spoilers document that Brooke Logan Forrester (Katherine Kelly Lang) knows that she has to support her daughter. Hope Spencer (Annika Noelle) appreciates that her mother stopped raising a fuss about Deacon Sharpe (Sean Kanan) wanting to be a part of her life.

Ridge Forrester (Thorsten Kaye) is loudly sounding the alarm. He does not want Deacon anywhere near Hope or Brooke.

It is fair to ask if Ridge’s marital insecurities are driving his desire to block Deacon?

Deacon spent the last handful of years in prison. He was rightly sent to jail because he tried shooting Quinn Fuller (Rena Sofer) on repeated occasions.

Kanan’s character exchanged a significant amount of correspondence with Hope while he was away. That effort built a bond with Noelle’s character.

Brooke was moved by Deacon’s apparent sincerity and Hope’s response to it. Since he has served his time and humbly requested a chance to make amends, Brooke decided not to stand in his way or Hope’s.

Ridge has a son with Brooke. Ridge Junior, RJ (Anthony Turpel) is not a current character, having last been seen in 2018.

Hope understands Ridge’s protective instincts are in play. But she also told her stepfather that he is not her father. Deacon is.

The recently announced recast of Allen as Taylor is significant. Tylo was asked to reprise her role but was not interested. So, Allen assumes this legacy role on B&B.

Ridge is in his eighth marriage with Brooke. Yes, the number between seven and nine represents the nuptials this greatest of all-time B&B couple has been involved in.

Taylor was married to Ridge twice, with the last union lasting from 1998 through 2006. Two marriages to Brooke came before the second marriage to Taylor ended, with the other six Bridge unions following.

No one can say that Ridge and Brooke are forever. But they always find their way back to each other.

If Ridge remains fixated on Deacon, then serious trouble with Brooke is possible. Taylor’s return reintroduces an option for Ridge that has not existed in many years. Unless Taylor is or becomes involved with someone else, her perceived soul mate will be an option for her as well.

This site is a leading source for everything linked to The Bold and the Beautiful. Check back at CDL regularly for B&B spoilers and news!