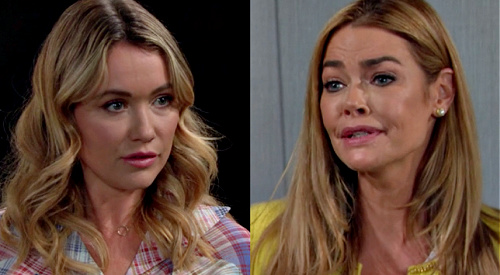 The Bold and the Beautiful (B&B) spoilers tease that Flo Fulton (Katrina Bowden) will finally get something that she’s been desperately wanting. As B&B viewers know, last week, February 22-26, Flo spent some time lamenting to Wyatt Spencer (Darin Brooks) about how she was still being shunned by the Logans.

Flo had hoped that by now, the Logan sisters and her cousin Hope Spencer (Annika Noelle) would have offered forgiveness. Of course, Flo has had a lot to overcome. Sure, she donated a kidney to Katie Logan (Heather Tom), saving her aunt’s life.

Everyone was grateful for that, but it still didn’t make up for the horrendous thing that Flo did to Hope and Liam Spencer (Scott Clifton) when she participated in the illegal adoption of Beth Spencer (River Davidson and Madeline Valdez) to Steffy Forrester (Jacqueline MacInnes Wood).

Well, during the week of March 1-5, Flo will finally get the opportunity she’s been wanting – she’ll be offered forgiveness and a fresh start by Brooke Forrester (Katherine Kelly Lang), Donna Logan (Jennifer Gareis), and Katie.

It’s been a long time in the making, but the Logan sisters will finally feel like it’s the right time to start to build a real relationship with Storm Logan’s (William deVry) daughter.

Hopefully, Flo accepts the gesture and doesn’t decide to get greedy about the whole thing.

As B&B viewers know, Flo also spent some time last week talking about her desire to be accepted by the Logans with her mom Shauna Fulton (Denise Richards), who encouraged her to fight for acceptance – just like a Logan would do.

That was good advice, but let’s hope that Flo doesn’t push for the Logan sisters to also accept Shauna back in their good graces. Something tells us that Brooke may make it clear that she’s accepting Flo into the family but NOT Shauna.

Of course, B&B viewers will remember that Shauna recently burned her bridges with Brooke when she conspired with Quinn Forrester (Rena Sofer) to finagle Ridge Forrester (Thorsten Kaye) into a quick Vegas wedding.

We expect that it will be way too soon for Brooke to even want to be in the same room as Shauna, let alone have her anywhere near Ridge for the foreseeable future.

Brooke may issue an ultimatum to Flo when she welcomes Flo back as a Logan – and that’s that Shauna isn’t welcome at family events alongside Flo.

That probably won’t be ideal for Flo, but she will surely understand, given how Shauna tricked Ridge into a marriage and directly undermined Brooke’s relationship with Ridge.

Flo had better take what she can get when it comes to Brooke’s forgiveness, and let her mom worry about herself!

Do you think that Shauna ever has any hope of being welcomed by the Logans? Stay tuned to the CBS soap, and we’ll keep you up to speed on all the latest Bold and the Beautiful spoilers and news. Check out our daily episode recaps as well!