The Bold and the Beautiful Spoilers: Carter Angry, Gets Zoe Fired – Pursuit of Zende Constitutes Harassment at Forrester? 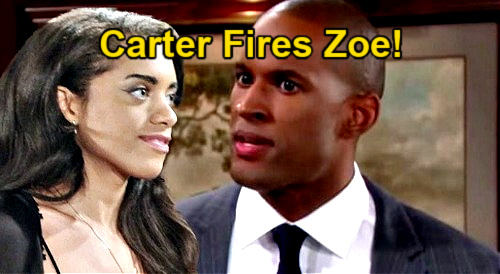 The Bold and the Beautiful (B&B) spoilers tease that Carter Walton (Lawrence Saint-Victor) will soon be in for a rude awakening. As B&B viewers know, Carter is blissfully engaged to Zoe Buckingham (Kiara Barnes), and he’s head-over-heels in love with the Forrester Creations model.

Well, it seems that Paris Buckingham (Diamond White) is onto what’s going on with Zoe’s feelings. The last that Paris and Zoe talked, Paris accused Zoe of acting like she was jealous over Paris’ evolving relationship with Zende.

And even though Zoe didn’t confirm to Paris that she’s got feelings for Zende, it looks like Paris is going to figure it out in short order.

During the week of January 25-29, Paris will get to the point where she starts to feel bad for Carter, and B&B spoilers say that she’ll determine that now’s the time to tell Carter what’s going on.

Paris seems to genuinely like Carter, and she won’t want him to be walking into a marriage when Zoe clearly wants someone else.

Around this same time, Ridge Forrester (Thorsten Kaye) will be figuring out that there’s something brewing between Zoe and Zende.

Ridge has sensed something previously between Zoe and Zende, but according to B&B spoilers, Ridge will end up busting Zoe and Zende big time, and since he’ll be Carter’s best man, he’s going to feel some responsibility for making sure Carter’s informed.

It seems that one way or another, Carter’s going to find out about Zoe’s attraction to Zende. Whether it’s Ridge or Zoe who informs Carter, one thing’s for sure – Carter’s going to be in disbelief at first, but then his feelings are probably going to quickly turn to anger.

Carter tends to be pretty even-keel most of the time, but perhaps now we’ll see Angry Carter emerge.

Carter as COO could be in the position of recommending that Zoe be dismissed from her position if she’s harassing another employee.

We’ll see what happens here, but Carter is certainly not going to be happy with Zoe, and he might not want to work with her in the future. It will be interesting to see if Carter works to get Zoe fired, and if part of this stems from his anger over being betrayed.

Do. you. think that Carter will seek to get Zoe fired from Forrester for her betrayal? Stick with CDL for all the latest Bold and the Beautiful news and spoilers, and we’ll keep you up to speed on late breaking updates. Check out our daily episode recaps of B&B, too!