The Bold and the Beautiful Spoilers: Steffy Gives Birth To A Son Next Summer – Liam Junior or Finn Junior Born? 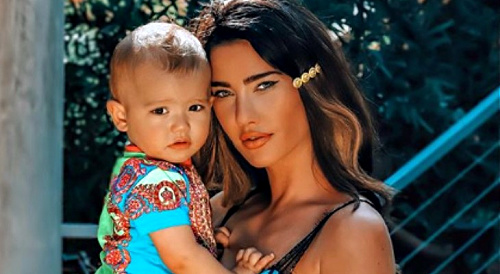 The Bold and the Beautiful spoilers document that Steffy Forrester (Jacqueline MacInnes Wood) is expecting her next child in the summer. She and Liam Spencer (Scott Clifton) might become parents for the third time, or John Finnegan (Tanner Novlan) could become a first-time dad, as he, Steffy, Liam, and Hope Spencer (Annika Noelle) are hoping.

Hardcore fans know that Steffy and Liam’s first child wasn’t Kelly Spencer (Avalon and Colette Gray). Aspen Forrester-Spencer (no child actor was ever cast for this role) was the baby that Steffy miscarried after her first motorcycle accident, which occurred many years ago.

So, Liam’s comments about Steffy having a son or a daughter were intriguing. Clifton’s dialogue referenced the son first. Liam already has two living daughters, but the implication is that Kelly will have a brother later this year.

Bold And The Beautiful Spoilers – Liam Spencer Already A Dad

Liam has two daughters, Kelly and Beth Spencer (Madeline Valdez and River Davidson). Those who are as hard on Liam as he’s been on himself might believe that he wasn’t thinking of his children when he ran to the cliff house a handful of weeks ago.

But many people, maybe anyone, would have thought as Liam did on that fateful night. He thought he saw Thomas Forrester (Matthew Atkinson) kissing Hope.

It was later revealed that the undiagnosed brain injury Thomas was suffering from caused him to have delusions, which included him thinking that a mannequin was an alternate version of Hope. Liam’s mistaken identity sparked what has become the latest major plot line on B&B.

Finn was upset, but also forgiving. Steffy was impressed by his overall response to her news.

Novlan’s character was understandably thrown off course. But his compliment about Steffy’s honesty was telling. Finn is willing to work through this situation, even after learning that she’s pregnant with a child that might not be his own.

Of course, a paternity test result that confirms Liam as the father would probably end Sinn. However, the opposite outcome would likely signal that Steffy and Finn’s relationship will endure.

Bold And The Beautiful Spoilers – Steffy Forrester In A Tough Spot

Hope isn’t expected to see this conflict from a higher perspective, as her wedding vows were broken. But the specific scenario that unfolded at the cliff house recreated a moment in time, with Steffy and Liam reliving who they once were to each other.

Yes, both characters have free will. One, the other, or both people should have prevented what happened from happening. But Steffy and Liam told the truth to Finn and Hope because they love those people the most right now.

Steffy can’t correct what happened. But she’s carrying Liam or Finn’s child, which means that Steffy and her baby shouldn’t face unnecessary stress. That topic is more important that anyone’s feelings, no matter what happens.