The Bold and the Beautiful Spoilers: Carter Risks It All For Love, Can’t Stop Seeing Quinn 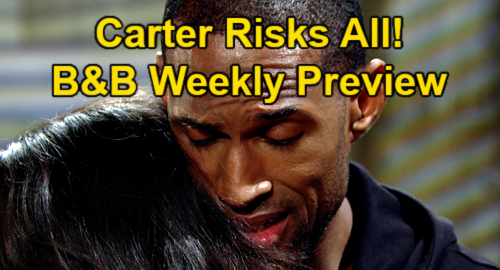 The Bold and the Beautiful spoilers reveal that the weekly preview for July 19 to July 23 teases more “Quarter” for fans. Despite making an agreement with Eric Forrester (John McCook), Carter Walton (Lawrence Saint-Victor) breaks the rules. When Quinn Forrester (Rena Sofer) tries walking away, Carter won’t let her go. He is willing to risk it all just to be with her.

B&B spoilers for the week of July 19 confirm that Carter and Quinn won’t be able to resist one another. Despite all of the trouble their fling has caused, they will engage in passion once again.

Even though the murder mystery was supposed to be the big sweeps storyline, it actually turned out to be “Quarter.”

Fans either love or hate these two together, but viewers can’t stop talking about Carter and Quinn no matter which side of the fence they’re on. They are turning into soap gold.

After succumbing to temptation once again, Quinn tries to reason with Carter. She wants to simply walk away. In her mind, Quinn thinks that Carter will be a pariah if they continue seeing each other.

It’s true that Carter could lose his job at Forrester Creations. Eric is well-connected and he could make it difficult for Carter to find another job.

The Bold and the Beautiful spoilers reveal that Carter doesn’t care what he loses anymore. He realizes that he made a mistake by agreeing to Eric’s terms.

In the weekly preview, Carter holds onto Quinn and can’t bring himself to let her go.

We know from Saint-Victor’s interview with Soap Opera Digest that Carter is in love. The actor explained that the heartbreak Carter felt over having to stop seeing Quinn was “unbearable” and “real.”

As for Quinn, she’s either in love or on her way to falling for him. After all, she couldn’t stop thinking about Carter even when she got her marriage back on track.

The Bold and the Beautiful Spoilers: Epic and Defining Moment

It is teased that Carter and Quinn will share an epic and defining moment by the end of the week, July 23. This could be admitting their love for one another or they could go public with their relationship.

This might mean the end of Carter’s career at Forrester Creations.

In any case, we don’t see “Quarter” ending anytime soon.

What would you like to see happen with Carter Walton? Should he risk it all to be with Quinn Forrester? Or will she only complicate and mess up his life? Be sure to catch up on everything happening with B&B right now.

Come back often for CDL’s The Bold and the Beautiful spoilers, news and updates.

Carter and Quinn have to fight their feelings this week on all-new episodes of #BoldandBeautiful. 💔 Watch the latest B&B episodes for free on @CBS or subscribe for more on @paramountplus! pic.twitter.com/Ozp01glOOg