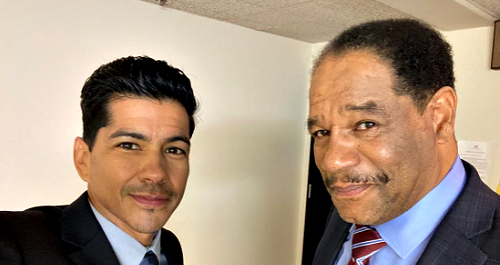 The Bold and the Beautiful (B&B) spoilers reveal that a couple of big returns are on the way. On Instagram, Jeremy Ray Valdez (Detective Alex Sanchez) shared a new pic that was taken at the studio with Dan Martin (Deputy Chief Bradley Baker). Valdez seems excited to be working with Martin on a hot new storyline, so let’s look at what he had to say in his post.

“Love doing cop stuff with my bro, boss and The Chief… @actordanmartin on the best show around!” Valdez said. He also included another photo of himself wearing a mask for safety – and a shot of the Stage 31 door.

Of course, we have to acknowledge what these returns mean for the show. If B&B needs Detective Sanchez and Deputy Chief Baker back on the scene, it’s obvious they’ll be investigating a crime! That’s exciting news and points to a major shocker happening down the road.

With that in mind, who might get arrested? Could Vinny Walker (Joe LoCicero) be the one to land behind bars?

That’s one possibility to consider, especially since Vinny is likely lying about the paternity test results being accurate. Vinny could get locked up for drugs, fraud and who knows what else since the key players will be determined to nail him for something.

Another possibility might be that Vinny could become the victim. If The Bold and the Beautiful wanted to kill a character off, Vinny might be a good choice since he’s pretty expendable.

Could B&B do a murder mystery with Vinny at the center of it? Someone might lose control on Vinny in a fit of anger after the paternity truth’s exposed.

On the other hand, maybe this crime will be connected to a new story entirely. The Bold and the Beautiful could shake things up by bringing some other characters into the mix again.

Regardless, there’ll indeed be a criminal investigation at some point. B&B fans will definitely look forward to seeing what Deputy Chief Baker and Detective Sanchez uncover.