The Bold and the Beautiful Spoilers: Eric’s Change of Heart – New Quinn Irresistible But What About Carter? 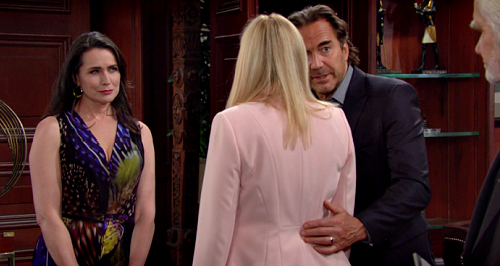 The Bold and the Beautiful spoilers reveal that Quinn Forrester (Rena Sofer) isn’t begging for Eric Forrester (John McCook) to forgive her. This time, she’s walking away with her head held up high. When Quinn left the office, Eric could help but wonder if he’s being too hasty with the divorce

B&B spoilers reveal that Quinn went to Forrester Creations to confront her soon-to-be ex-husband. At first, Eric was furious that Quinn had the nerve to show up at his office.

Eric also didn’t seem interested in discussing their marriage. After all, he is already in the process of divorcing her.

However, there were some things Quinn had to get off her chest. She called Eric out on never defending her and never standing up for her.

Quinn told him that every single time Brooke Logan Forrester Katherine Kelly Lang) would insult her, Eric would say nothing. However, she couldn’t get that same consideration.

Quinn also mentioned that all of his exes have cheated on him and he forgave every single one of them. For some reason, he can’t forgive her for committing the same sin, though.

B&B Spoilers: Walking Away With Pride

Quinn also let Eric know that she’s done apologizing and having others make her feel bad about herself. Instead, she admitted to making a big mistake but it wasn’t going to define her. Before strutting out of the Forrester Creations office, Quinn said she is proud of the woman she’s becoming.

The Bold and the Beautiful spoilers reveal that as Quinn talked about certain aspects of Eric’s unfair treatment, the patriarch would wince.

As he watched her strut with confidence out the door, he couldn’t help but be in awe of the “new unapologetic Quinn.”

It was clear that he was wondering if she was right about how he treated her differently than his other wives.

The fact that Quinn didn’t beg this time and walked away on her own with confidence might have something to do with Eric’s reconsideration.

Brooke already sees that Eric is thinking about giving Quinn another chance.

Trying to stop him, she became pushy and demanding. She kept getting in his face and that’s when he put his foot down. After all, he is a grown man and can make his own decisions.

The Bold And The Beautiful Spoilers: What About Carter Walton?

Carter Walton (Lawrence Saint-Victor) has strong feelings for Quinn. However, it seems that Quinn is more focused on Eric. She even talked about the Forrester Creations patriarch right after they enjoyed some passion.

It seems as if Eric and Quinn will probably reunite sometime in the future. However, just like always, Carter will end up with a broken heart.

Be sure to catch up on everything happening with B&B right now. Come back often to CDL for The Bold and the Beautiful spoilers, news and updates.