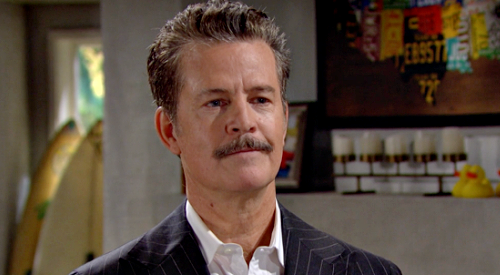 The intrigue with this new part of Finn’s story isn’t that he’s adopted, but that his adopted father knows more than he’s telling. The audience was allowed to hear Jack’s inner thoughts, as he questioned whether he should tell Finn and Steffy what he knew.

Bold and the Beautiful Spoilers – Keeping Sinn Together And Happy

Here’s hoping that Finn’s backstory proves to be tantalizing, rather than dangerous. No one wants to see some tale where one of Finn’s biological parents has a deadly disease that he or Hayes Forrester Finnegan (no baby actor’s name known for this role) is diagnosed with.

Sinn is engaged and set to be married next week. That happened after Steffy was convinced by her dad to set the date. She was somewhat hesitant to do so because of how busy she and Finn have been lately, following Hayes’ birth.

Previews show that the Sinn wedding happens, but a bombshell is teased as part of the ceremony.

An officiant, who isn’t Carter Walton (Lawrence Saint-Victor) for other storyline reasons, asks the traditional question. But the speak now or forever hold your peace line is coupled with B&B’s promotion of an added drama drop.

It appears plausible that the arrival of Finn’s adopted mother will be that reveal. However, Steffy’s mother, Taylor Hayes (Hunter Tylo), has also been referenced. For continuity purposes, if one wants to use that phrase, it would make sense for Tylo to return to the cast in this circumstances.

Taylor has often stirred the pot in the past. She could at least become involved in banter with Brooke Logan Forrester (Katherine Kelly Lang), if not also mix it up or just get to know her fellow mother-in-law, Li.

Bold and the Beautiful Spoilers – Okay, So Who Is Finn’s Biological Mother?

We will stick with the unknown mother question in this digital space, as that’s enough to consider for now. So, how about Brooke, Donna Logan (Jennifer Gareis), Shauna Fulton (Denise Richards), or Quinn Fuller (Rena Sofer)?

Any lady from that quartet would be intriguing. Brooke would become Steffy’s instant mother-in-law. Just that would be terrific soap.

Gareis deserves more screen time. So, to have Donna be Finn’s mom would be great.

And then there is Quinn. Oh, the possibilities of having her be Finn’s mother are incredible. Time will tell if she or one of the other ladies are tied into this new mystery on B&B.