The Bold and the Beautiful Spoilers: Finn Asks Ridge For Steffy’s Hand in Marriage – Gets Approval from Bride’s Dad? 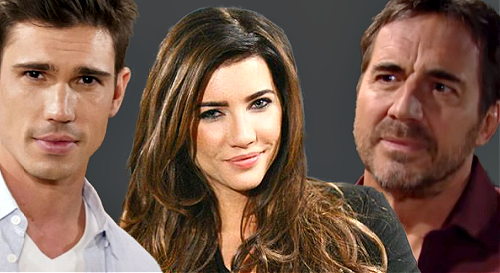 The Bold and the Beautiful (B&B) spoilers tease that Ridge Forrester (Thorsten Kaye) will worry about Steffy Forrester (Jacqueline MacInnes Wood) and what her future’s going to look like.

After Steffy updates Ridge on how her steamy night with Liam Spencer (Scott Clifton) turned into an unplanned pregnancy, Ridge will definitely have some concerns.

Liam is married to Hope Spencer (Annika Noelle) and obviously wants to make that marriage work if possible. Ridge is bound to be outraged over all the flip-flopping, but Steffy will insist that Liam is committed to fixing things with Hope.

Of course, Ridge may wonder if Steffy’s sure about that. Since the father could be Liam, Ridge might ask if Steffy’s certain Finn can get past that. This could be child number two for Liam and Steffy, so they’d have another permanent tie between them.

Ridge doesn’t know Finn all that well and may doubt his commitment to Steffy if things don’t turn out how they want.

Fortunately, The Bold and the Beautiful spoilers say Finn will set the record straight about his intentions. It looks like Finn will seek Ridge out for a private conversation during the week of February 1-5.

Finn will work to make Ridge understand his deep love for Steffy – no matter what the upcoming paternity results say.

B&B fans can expect Finn to reveal his plans to Ridge. He’ll spell out the “Sinn” future he envisions, so this seems like a great time for Finn to ask an important question. Since Finn will be revealing plans and sharing his intentions, will he request Ridge’s blessing to marry Steffy?

Finn is a respectful guy who knows how much Steffy values her relationship with her father. It would be out of character for Finn to propose without asking for Ridge’s blessing first.

Naturally, Finn won’t need Ridge’s permission to tie the knot with Steffy, but he might insist that it’d mean a lot if Ridge approved. Ridge may find himself quite impressed with Finn once he divulges his plan to make Steffy happy – hopefully as a bride!

We’ve indeed been hearing B&B rumblings about Finn’s looming marriage proposal, so it sounds like he’ll stand by his commitment and take a big step forward. Would you like to see Finn go retro and ask Ridge for Steffy’s hand in marriage?