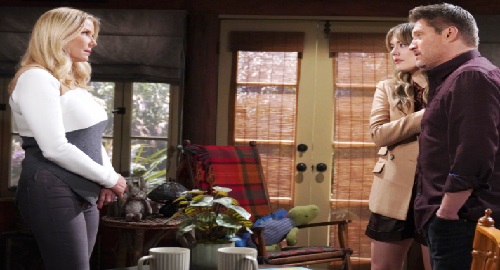 The Bold and the Beautiful (B&B) spoilers update for Friday, December 3, teases that Hope Spencer (Annika Noelle) will push Ridge Forrester (Thorsten Kaye) over the edge while Brooke Forrester (Katherine Kelly Lang) faces a battle of the heart. Let’s talk about what’s ahead on Friday’s exciting show.

Ridge has been trying to talk some sense into Hope and Brooke when it comes to Deacon Sharpe (Sean Kanan), but nothing’s been successful. Since Hope is craving a bond with her father and Brooke wants to support that, every effort Ridge makes gets shut down.

There are only so many ways Ridge can say “Deacon isn’t going to change” and “Deacon can’t be trusted.” Ridge has said all there is to say at this point, so he’ll try another tactic.

After Hope makes her position crystal clear, Ridge will decide to do the same. He’ll be pushed to his limit and will demand that Hope move out if she’s going to insist on this father-daughter relationship.

Ridge can’t stop Hope from bonding with Deacon, but he’ll warn that she’ll have to do it somewhere else. He won’t want Deacon on the property and won’t think Hope belongs there either if she’s not going to budge on this.

Of course, Hope has already been contemplating moving out of the cabin with Liam Spencer (Scott Clifton) and the kids. Ridge isn’t exactly creating an environment that’s conducive to forming a relationship with Deacon. That goes for Hope as well as the grandchildren she wants involved in Deacon’s life.

Ridge will hope this ultimatum brings Hope’s surrender, but it could easily drive her right off the premises instead. Over with Brooke, she’ll most likely lay down the law with Deacon and let him know the past must stay in the past.

Brooke may acknowledge that she indeed recalls the passion she once shared with Deacon, but she’s with Ridge now and intends to honor her commitment to him. However, Brooke has already been having some sizzling flashbacks – and that trend should continue. It’s clear that Brooke’s facing a bigger battle of the heart than she’s letting on!

Other B&B spoilers say John “Finn” Finnegan (Tanner Novlan) will face some inner turmoil of his own. Despite Finn’s desire to respect Steffy Forrester’s (Jacqueline MacInnes Wood) wishes, Sheila Carter (Kimberlin Brown) has a way of tugging at his heartstrings.

Sheila pushed Jack Finnegan (Ted King) to confess the truth about Finn’s paternity, so that counts for something as far as he’s concerned. The fact that Sheila’s reaching out and checking on Finn will mean a lot, too.

Although Finn may give Sheila another nudge out of his life, it should be a gentler one. Sheila may consider that progress on some level, but it won’t be enough. She’ll remain determined to eliminate Steffy’s control on Finn, but that’ll be easier said than done!