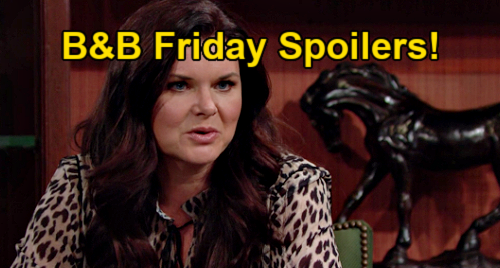 The Bold and the Beautiful spoilers for Friday, February 19, tease that the tense exchange in the backstage area of Forrester Creations will continue. As B&B viewers know, Carter Walton (Lawrence Saint-Victor) has just blasted Zende Forrester Dominguez (Delon de Metz) and Zoe Buckingham (Kiara Barnes) for their horrible betrayal. And now Paris Buckingham (Diamond White) has walked in on the scene.

Carter has asked Paris if she thinks that Zoe is sincere in her desire to reunite with him, or if he’s just being played again. We’ll see how Paris gets out of this one – surely, she knows that Zoe can’t be trusted, but she probably won’t want to publicly badmouth her own sister, so she’ll have to handle things diplomatically.

B&B spoilers indicate that Carter won’t hesitate to issue Paris a warning, which will almost surely be about trusting Zende. Carter knows that Paris and Zende share an attraction, and he’ll want to warn Paris to not trust Zende with her heart.

Carter might just say that Zende is a backstabbing creep who can’t be trusted after what he’s just found out about the text that Zende sent Zoe.

Nevertheless, Zende will end up begging Paris for a chance to prove himself once the confrontation is all said and done. Zende seems to really want a future with Paris, but Paris will naturally be wary, since Zende was only recently chasing after Zoe.

We’ll see what Paris decides about embarking on a new relationship – she might just want to focus on work for now!

Meanwhile, on the new episode of B&B on Friday, February 19, Brooke Forrester (Katherine Kelly Lang) and Donna Logan (Jennifer Gareis) will do as Bill Spencer (Don Diamont) asked and talk with Katie Logan (Heather Tom) about a reconciliation with Bill.

As B&B viewers know, Bill has just begged Brooke and Donna to help try to persuade Katie to reunite with him.

Well, it looks like Katie may show up at Brooke’s mansion, and the three sisters will sit down for a talk. Brooke and Donna will probably let Katie know that they’ve talked with Bill and that he seems sincere in his desire to put his family back together.

Katie might finally be at the point where she’s willing to listen to her sisters about Bill, since she was just reminiscing about her good times with him.

We’ll see if Katie makes any decisions on Friday’s episode of the Bold and the Beautiful, but we think that there may be a good chance that when Bill returns from his business trip to Genoa City, he could be greeted by Katie who is at least willing to discuss a reconciliation.

It sounds like a lot of B&B drama is heating up for Friday’s episode, so stay tuned! Stick with the CBS soap and don’t forget to check CDL regularly for the latest Bold and the Beautiful spoilers, daily episode recaps, and news.