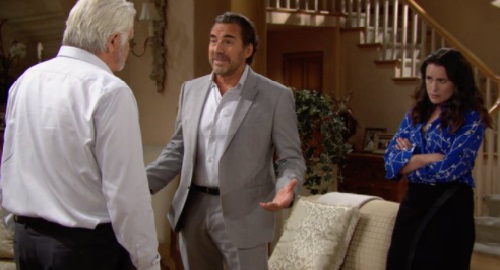 At the Forrester mansion on Friday’s B&B episode, Ridge asked what possible reason Eric would have for pushing Quinn Forrester (Rena Sofer) to be with Carter Walton (Lawrence Saint-Victor). Eric raised his voice as he asked if he really had to say this out loud for Ridge.

Ridge realized it was true – that Eric couldn’t physically make love to Quinn anymore. Eric felt that part of his life was over, but he told Ridge that didn’t have to be the case for Quinn. Ridge felt Quinn had manipulated Eric into believing she deserved to be in another man’s bed. He wanted Quinn’s hideous portrait to come down and told her it was game over.

Ridge pushed Quinn to pack her stuff and get out, but Eric warned Quinn wasn’t going anywhere. He argued that Quinn gave him the companionship he needed now, but Quinn needed more. Eric argued that Ridge was acting like he was weak, but it took tremendous strength to allow Quinn to be with Carter.

Eric hoped Ridge never reached the point in his life where he feared being alone the way he did. Ridge said Eric had lost his dignity, which infuriated Quinn. “How dare you!” Quinn snapped. She refused to let Ridge stand there and berated Eric, but Ridge argued that his father had been conned.

Eric finally bellowed that he didn’t want to be alone in that house. He rattled off a list of all the people who left – and after Eric kicked Quinn out, he said he remembered what it was like to be alone there. Eric brought Quinn back because she filled his heart and helped avoid that dreaded emptiness.

After Eric declared this was his house and his life, he vowed not to be alone. Eric and Quinn then shared a kiss in front of a scowling Ridge.

At Forrester Creations, Katie Logan (Heather Tom) insisted she knew Quinn was telling the truth because she heard it straight from Eric. Brooke was appalled with Quinn since this was clearly a cry for help. Katie admitted that although Eric acted like he was OK with it, she could tell he was hurting badly.

Brooke wondered how to help Eric, but Katie insisted they couldn’t use Ridge’s strategy. She didn’t think they should make Eric feel like he was under attack. Brooke was just glad Eric had Katie to lean on and added that he really needed her.

At the cabin, Hope and Finn had coffee while they waited for Liam Spencer (Scott Clifton), Steffy Forrester (Jacqueline MacInnes Wood) and Kelly Spencer (Avalon and Collette Gray) to return.

Hope acknowledged it was a little weird since her husband was at the park with Finn’s wife and their child, but she agreed with Finn about it being the good kind of weird. Finn knew Hope had been on quite the rollercoaster, but she’d accepted the reality that Liam had loved Steffy as well as her.

That said, Hope felt it was a lot easier to move forward now that Steffy was happily married to Finn. She thanked Finn for getting them off the merry-go-round, so he said it was his pleasure. Talk turned to Sheila eventually, so Finn acknowledged that some things didn’t work out as well as others.

At Sheila’s hotel, she confirmed to Keith (Nick Waters) the assistant manager that she was booking the room for at least three more nights. Sheila admitted she met her grandson for the first time and wasn’t leaving until she saw him as well as her son again. She blamed her son’s wife for making her out to be some villain and keeping them apart.

Keith argued that it never hurt to reach out. He thought Sheila should leave her son’s wife out of it and just deal directly with him. Keith suggested that Sheila’s fun might be feeling the same way. After Sheila sent Finn a text, she admired his picture and wondered if he would respond.

Back at the cabin, Finn told Hope he understood why he had to keep Sheila at a distance. Hope asked if Sheila had reached out – and suddenly, Sheila’s message came through on Finn’s phone. He read the text to Hope, which said that Sheila meant no harm and that she had a powerful sensation in her whole body telling her to be with her son and grandson.

Sheila added that she was just a mother and grandmother who wanted to be part of their lives. She told Finn to never doubt how much she loved him. “Wow,” Hope said with a slight gasp. She asked how Finn felt about the text, but he made it clear that Steffy and the kids were his priority.

There was no room in Finn’s life for Sheila, even if she’d changed. Finn suggested there was just too much history to overcome, so Hope wondered if he was trying to convince her or himself. Finn replied that he’d be lying if he said he didn’t want to get to know his birth mom. He felt like all he knew of Sheila was the worst part – all the crimes.

“I mean, that can’t be all there is to my mother,” Finn said. He quickly pointed out that he meant birth mother since whether Sheila was in his life or not, she would never replace his mom. Finn wanted more than unanswered questions and wanted to know Sheila, but he knew Steffy wouldn’t have it and understood why. Hope got up to embrace Finn and assure him that it’d all work out.