The Bold and the Beautiful Spoilers: Jack Coerces Finn – Endangering Hayes Only Way To Save Steffy Family 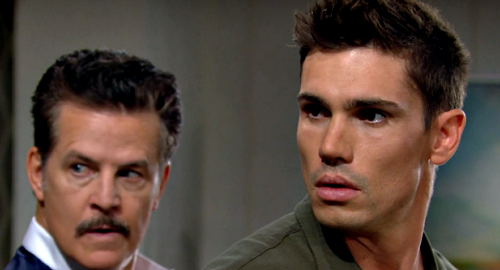 The Bold and the Beautiful spoilers reveal that the promo preview for the week of August 23 to 27 teases an explosive coercion. After being blackmailed, Jack Finnegan (Ted King) pressures John “Finn” Finnegan (Tanner Novlan) to meet with Sheila Carter (Kimberlin Brown). As Sheila holds the baby, Steffy Forrester (Jacqueline MacInnes Wood) walks in the door,.

B&B spoilers reveal that Sheila blackmailed Jack. If Jack wants to keep their affair a secret, then Sheila wants something in exchange. She demands that Jack convince Finn to meet one more time.

Not only does Sheila want to see Finn again, but wants to meet her grandson. Unfortunately, Jack has decided to take Sheila’s offer and gets to work on making it happen.

What Jack doesn’t realize is he might be protecting himself for now, but Sheila can’t be taken at her word. Plus, Jack is putting Finn, Steffy and Hayes Forrester Finnegan in grave danger.

In the promo, Jack meets with Finn and pressures him to see Sheila one more time. Not only does Jack insist that Finn must do this to protect his family, but it has to be kept a secret from Steffy.

So far, Finn has only kept one secret from the woman he loves – that he replied to a text message from Sheila. However, replying to a text and putting an innocent baby in the arms of a psychopath are two completely different things.

Finn is horrified and can’t believe his father is asking this of him. Jack does manage to convince Finn to do what he says, though.

The Bold and the Beautiful spoilers reveal that Finn really is divided. On one hand, he doesn’t want to lie or keep secrets from Steffy.

Plus, it’s not just Steffy that’s telling him horror stories about Sheila. The entire Forrester family, as well as the Logans have told Finn what Sheila is really like.

Then, there is the deep emotional urge that Finn feels to get to know his birth mother, something he has wished for his entire life.

Now, Jack is throwing a curveball at Finn by saying meeting Sheila and keeping it from Steffy is the only way to save his family.

The Bold and the Beautiful Spoilers: Steffy Forrester’s Horror

As Sheila holds Hayes, Jack and Finn are in the same room. The meeting takes place when Steffy and Hope Logan Spencer (Annika Noelle) are out of town for business.

Steffy must come home earlier than expected, perhaps because her maternal instincts are screaming that something is wrong.

Steffy walks in the door and gasps in horror. Sheila has baby Hayes in her arms while Jack and Finn scramble to explain themselves.

Will Finn tell Steffy that he was coerced into this arrangement by his own father? Or will Jack actually allow his son to lose everything just to keep his affair a secret?

Blackmail and Betrayal 💣 It’s all coming up this week on B&B! Watch the latest #BoldandBeautiful episodes for free on @CBS or subscribe for more on @paramountplus. pic.twitter.com/wZGWebzhzQ