BY Sean O'Brien on May 25, 2021 | Comments: Leave Comments
Related : Soap Opera, Spoiler, Television, The Bold and the Beautiful 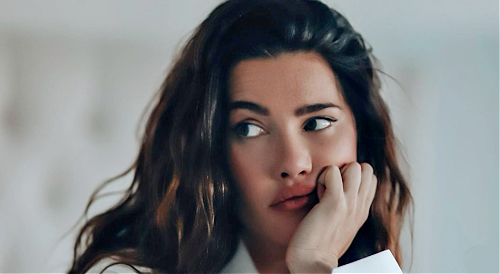 The Bold and the Beautiful spoilers document that Jacqueline MacInnes Wood’s (Steffy Forrester) 2021 Daytime Emmy Award nomination puts her on pace to win a second statue.

Wood earned the Emmy, for her portrayal of Steffy Forrester in the Outstanding Lead Actress in a Drama Series category, in 2019.

The forty-eighth annual awards ceremony will be broadcast and streamed on June 25. Daytime fans know that the ceremony was traditionally presented on television for decades before migrating to a streaming-only format in recent years.

Bold And The Beautiful Spoilers – Steffy Killing It On Center Stage

Viewers were going to see Steffy’s motorcycle accident and the fallout from it last spring. But the pandemic shut production down for months. So, that storyline was shown later in the summer.

The actor worked a memorable arc. It arguably ranks with the more memorable turns of her run on B&B, which began in 2008.

As devoted fans recall, Steffy’s recovery included her fall into the throes of addiction, with Wood delivering a mesmerizing series of performances.

Bold And The Beautiful Spoilers – And Now There Is Finn

No current news about Steffy is complete without mentioning John Finnegan (Tanner Novlan). Finn is the reason why Steffy escaped the dysfunctional Steam verses Lope storm that raged for years.

Sinn has become Steffy’s solace. Liam Spencer (Scott Clifton) will always remain an important part of her life because he’s Kelly Spencer’s (Avalon and Colette Gray) father. But Liam is accurately labeled as a past soul mate.

Yes, a head-fake was offered, where Liam appeared to be the father of the baby Steffy will soon deliver. But all was righted after Vincent Walker’s (Joe LoCicero) paternity mischief was revealed.

Finn is the father, he and Steffy were recently engaged, and all appears to project brightly for the immediate future of their family.

Bold And The Beautiful Spoilers – JMW Back From Needed Vacation

Wood filmed advanced scenes before taking maternity leave. She and her husband welcomed their second son in February.

In the recent past Finn noted that Steffy took Kelly on a trip up the California coast. He subsequently joined them. So, Steffy, Kelly, and Finn haven’t been seen in a number of weeks.

The Sinn family is set to return to Los Angeles, California, where they will surely be drawn into the drama that’s been unfolding during their trip. Fans will welcome them back, while also rooting for Wood to win her second Daytime Emmy next month.