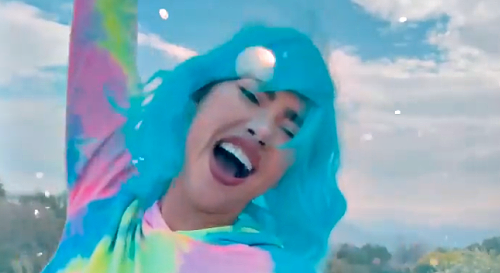 The Bold and the Beautiful (B&B) spoilers has some fantastic news to report about a popular B&B star. Jacqueline MacInnes Wood, who portrays Steffy Forrester on the CBS soap, has just revealed the gender of her unborn baby with her Instagram followers and…it’s a boy!

Jacqueline shared the news by posting a video of herself lip-syncing to “I’m coming Out” by Diana Ross. In the video, Jacqueline is wearing various pink and blue wigs, and she takes them off in succession to ultimately reveal the last wig, which is blue. “It’s a boy” appears on the screen as Jacqueline happily dances.

Jacqueline’s caption for the video reads: “Annnnddd the category IS…Gender Reveal Extravaganza. #genderreveal.” Jacqueline’s fans and followers have been responding steadily with well-wishes for her reveal. Everyone is thrilled that Jacqueline will be having a new little boy soon.

As you might be aware, Jacqueline and her husband Elan Ruspoli currently have one son named Rise who’s nearly two years old. Rise frequently makes appearances on Jacqueline’s Instagram feed and seems to enjoy the spotlight. Now Rise will soon be welcoming a new little brother into the world, which should be great fun for him.

As B&B viewers know, Jacqueline’s pregnancy has been written into the CBS soap, as Steffy has also recently found out that she’s pregnant. Of course, Steffy’s pregnancy is infused with much more drama that Jacqueline’s, as Steffy currently doesn’t know who the father of her baby is.

We wish Jacqueline, Elan, and Rise all the best as they prepare to welcome a new baby boy into the world, and our congratulations go out to them all! Stay tuned to B&B and we’ll be sure to keep you up to speed on the latest Bold and the Beautiful spoilers, daily episode recaps, and news.