The Bold and the Beautiful Spoilers: Jealous Sheila Erupts Over Deacon And Brooke 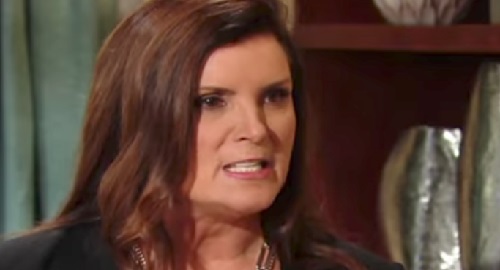 The Bold and the Beautiful (B&B) spoilers tease that Sheila Carter’s (Kimberlin Brown) jealousy will erupt over Deacon Sharpe’s (Sean Kanan) big step forward with Brooke Forrester (Katherine Kelly Lang) and Hope Spencer (Annika Noelle). Sheila will have to decide how to handle that jealousy, so let’s talk about what’s coming up.

B&B fans know Sheila fought hard to team up with Deacon and try to win their children over. Deacon eventually bowed out of that alliance, but he’s still been hanging around her and commiserating. Sheila probably thinks she can rope Deacon back into scheming, but he really doesn’t need her at this point.

Deacon has already secured another chance with Hope, who believes her dad has changed for the better and is giving him a real opportunity to prove it. Hope even has a good feeling about Deacon winning over Brooke, and he’ll indeed make more progress with Brooke in the coming weeks.

Sheila previously scoffed at the idea of Deacon ever winning Brooke over, especially in any kind of romantic realm. That’s why Sheila will become frustrated when love actually seems to be blooming again.

Brooke’s feelings for Deacon will grow stronger and become difficult to fight – all while her marriage to Ridge Forrester (Thorsten Kaye) crumbles. Deacon will appear to be on the verge of getting everything he wants, so Sheila will get jealous since she’s stuck spinning her wheels.

Sheila will reach out to John “Finn” Finnegan (Tanner Novlan) once more and hope it makes a difference. This birth mom will succeed in tugging at Finn’s heartstrings, but Steffy Forrester (Jacqueline MacInnes Wood) will remain a huge hurdle.

Finn will want Sheila to be part of his life deep down, but he won’t want to go against Steffy’s rules or do anything that might put the kids at risk. Sheila will be at a disadvantage since unlike Hope, Finn won’t be ready to rush to his criminal parent’s defense and demand a place for her.

On December 10, B&B spoilers say Sheila will resent Deacon’s success story so far and will wish she just as far along in her own bonding mission. Bitter Sheila might even be tempted to sabotage Deacon, but she may decide against it since his progress could help her in the end.

Perhaps Sheila will ultimately decide this can work in her favor if everyone sees Deacon as truly reformed down the road. Sheila might envision a future where she gets her own shot at family bonding and realize a lot’s riding on Deacon’s second chance!